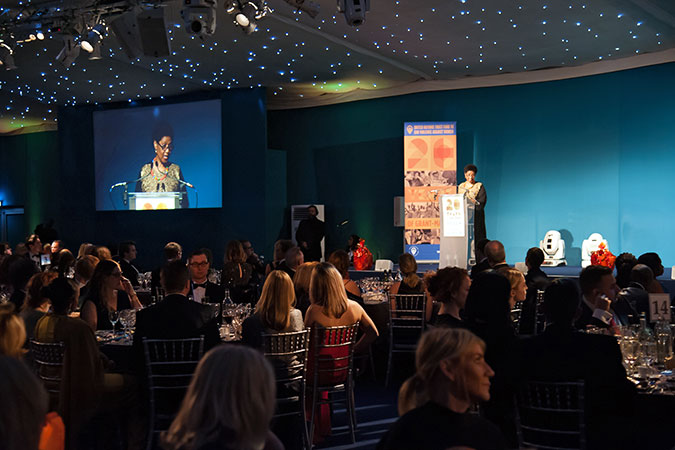 Hosted by UN Women Executive Director Phumzile Mlambo-Ngcuka, the event celebrated the life-changing achievements of UN Trust Fund-supported interventions. Notable speakers included HRH Princess Eugenie of York; Lord Bates, Minister of State at the Department for International Development; Frances Corner, Head of London College of Fashion and Pro Vice-Chancellor Digital of University of the Arts London; women’s rights activists; and Aldijana Sisic, Chief of the UN Trust Fund. Their remarks focused on the persistent global pandemic of violence against women and girls, and the significant accomplishments of projects supported by the UN Trust Fund across the world since its creation in 1996.

Coinciding with the start of the 16 Days of Activism Against Gender-Based Violence, the gala highlighted the urgent need for resources to maintain successful global interventions to end this global pandemic. The evening began with an announcement by Lord Bates of the renewed support of the United Kingdom to the UN Trust Fund, with a contribution of up to £12 million over three years. 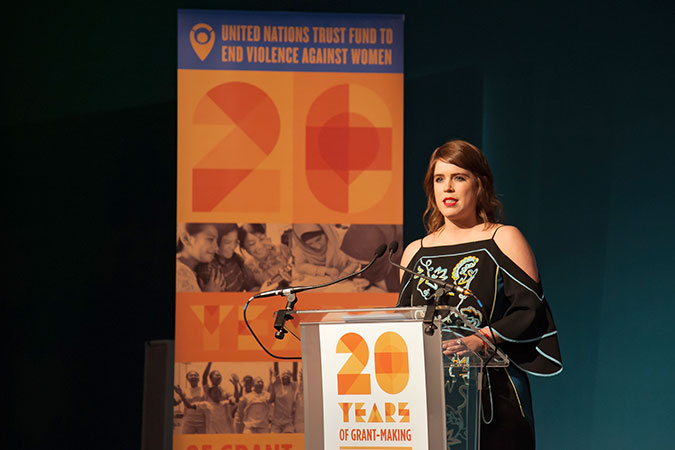 HRH Princess Eugenie of York spoke of the importance of ending human trafficking and assisting women survivors. “In the last few weeks we have seen a seismic change of public awareness and perception of violence against women,” said HRH Princess Eugenie of York. “I stand here passionately with my heart to fight for the freedom of those enslaved. I’m very proud of the work the UK Government has been doing to tackle this holistically, addressing the root causes of violence, ending impunity for perpetrators, and increasing the political, economic and social empowerment of women and girls all over the world.”

On the International Day for the Elimination of Violence against Women, the #UNTF gala, HRH Princess Eugenie of York spoke on ending human trafficking and supporting women survivors and @UN_Women ED @phumzileunwomen built on the current momentum & conversation to #EndVAW pic.twitter.com/DHvwBwoGuG

At the event, UN Women Executive Director Phumzile Mlambo-Ngcuka said: “The Trust Fund grantees give agency and voice to women and girls, with a special focus on the most vulnerable, and enable survivors to access justice and rebuild their lives. From providing therapy sessions to Yezidi survivors in Iraq to educating girls and boys in Mongolia on gender-based violence, its work can quite literally save lives. Increased support to the Trust Fund will ensure this work is scaled up and help make our vision of a world free from violence against women and girls a reality.”

Actors Gabriella Wright and Joanne Froggatt narrated two powerful stories of beneficiaries of the Trust Fund projects. The first came from Jamuna and her daughter in Nepal, where women are often subject to the harmful traditional practice of chhaupadi, whereby menstruating girls and women are forced to be in an isolated shed, often exposed to the cold and the threat of sexual violence. Thanks to a UN Trust Fund-supported project from Restless Development Nepal, which provides education on personal hygiene and sexual and reproductive rights to young people and local leaders to act as peer educators, Jamuna and her daughter managed to escape this practice.

The second one was Nyandeni Dawara story, from Gambia, a country where almost 75 per cent of women have undergone Female Genital mutilation (FGM)[1]. After attending a workshop that showed women the profound damage FGM causes and why this harmful traditional practice that affects at least 200 million girls today needs to end, Nyandeni decided to protect her daughter against it and is now an advocate to end FGM in her village and region.

Internationally renowned broadcaster Zeinab Badawi, as the emcee for the gala, interviewed two UN Trust Fund grantee representatives at the event. Marija Andjelkovic, from the NGO ASTRA in Serbia, which works on ending human trafficking in the Balkans, said: “It is still necessary to raise general awareness, sensitivity and participation of the whole society to end trafficking in women. Because trafficking is not someone else’s problem, it’s our common challenge.”

Chinyere Eyoh, from the NGO SOAR in Nigeria, focused on protecting girls from sexual violence, gave an account on the need for interventions to end sexual violence against girls in Nigeria: “We are focused on breaking the silence, it’s not ok to be quiet about [sexual violence]. We create safe spaces in Nigeria where girls can come together and build capacity on how to exercise their rights.”

On the night of the gala, the Pavilion at the Tower of London, where the event took place, was lit in orange to signify a brighter future free from violence against women and girls. The Tower of London joins other prominent buildings and landmarks around the world that were lit in orange to kick off the 16 Days of Activism against Gender-Based Violence, such as the Parliament in Bangladesh, the Palace of Fine Arts in Mexico City, Mexico, La Scala theatre in Milan, the National Theatre of Algiers, and Table Mountain in Cape Town, South Africa.

.@sarahikumu lights up the room with “Rise Up” during the #UNTF gala on the Intl Day for the Elimination #orangetheworld #16days pic.twitter.com/GFiQrGpq5b

The UN Trust Fund is the only global grant-making mechanism exclusively dedicated to eradicating all forms of violence against women and girls. Managed by UN Women, on behalf of the UN system, the UN Trust Fund has supported over 460 organizations over the past 20 years with results that show how sustained resources and dedicated work can lead to the prevention and elimination of violence against women and girls.

Support the UN Trust Fund to End Violence against Women and donate: https://donate.unwomen.org/16Days.

Orange your profile picture to show your support and spread the word on all social media platforms using the hashtags #orangetheworld and #16days. Orange graphics, infographics and sample messages are available here.

Related News
12/09/2018
Press release: Her Royal Highness Princess Eugenie of York visits UN Trust Fund grantees in Serbia
25/11/2019
Remarks by Under-Secretary-General of the United Nations and Executive Director of UN Women, Phumzile Mlambo-Ngcuka, on the International Day for the Elimination of Violence against Women Official Commemoration in New York
21/11/2016
Press release: Robust funding critical to ending the pandemic of violence against women and girls
08/07/2016
Statement by UN Women Executive Director Phumzile Mlambo-Ngcuka on the killing of Lesbia Yaneth and Jo Cox
24/04/2016
UN Trust Fund to End Violence against Women marks 20 years with event in Amsterdam
END_OF_DOCUMENT_TOKEN_TO_BE_REPLACED