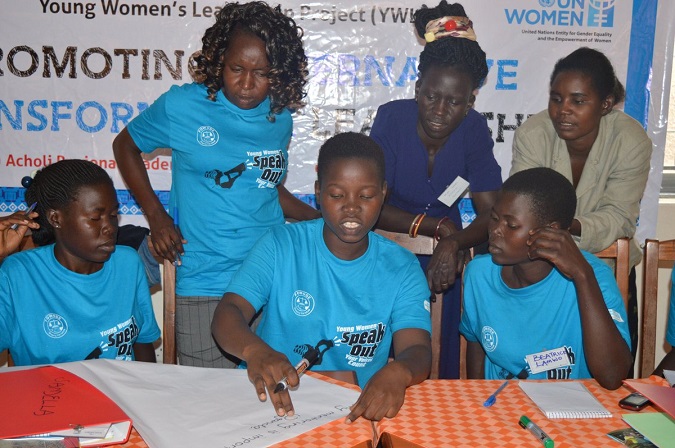 Having grown up in a patriarchal society, Emanuella Kokoi 27, never expected that one day she could take a lead to promote peace as well as campaign against gender injustices in her community. According to the Karamajong culture, it is a taboo to challenge such injustices. Kokoi’s journey to gender equality activism started after undergoing a mentorship training by UN Women under the Young Women and Leadership Project (YWLP) implemented in partnership with FOWODE. From the training, she got to understand issues of gender equality and the equal roles men and women have to play towards achieving peace and development.

“Because of the training, I feel it’s my responsibility to contribute to peace building in my community.” On several occasions, Kokoi has engaged fellow youth in peace building.

The area is known for cattle rustling. “Most of the raids are carried out by youth. Whenever I see a problem/hear something that is likely to affect our peace, I engage 2-3 people and preach to them peace. They also preach to others. I want to be part of the team that promotes peace and democracy in the country,” says Kokoi.

Kokoi mentors others into leadership. She was one of the facilitators during a one week regional mentorship training camp for young women organized by UN Women in partnership with FOWODE in August, 2017. The training aimed at building visionary young leaders who are commitment to gender equality, social justice and social transformation.

According to Agripinner Nandhego, UN Women’s Programme Specialist, the project targets to have a cadre of 30 young women leadership mentors from 10 districts as well as enhance the capacity of 200 young women to participate in decision making in 10 districts by December 2017.

Related News
From complex coding in Kigali to graduation gowns in Pittsburgh
I am Generation Equality: Nicholas Niwagaba, young leader, human rights advocate
From where I stand: “I started my business with 15 dollars”
I am Generation Equality: Immaculate Akello, climate change activist and lawyer standing up for rural women
Women in Uganda’s villages influence local budgets and policies
END_OF_DOCUMENT_TOKEN_TO_BE_REPLACED