At the 61st session of the Commission on the Status of Women, youth come together to strategize and collaborate to achieve gender equality and sustainable development.

At the 61st session of the Commission on the Status of Women (CSW61), UN Women is hosting a Youth Forum titled, “Youth Create Gender Equality–Economic Empowerment in the Changing World of Work”, from 11 – 12 March at the UN Headquarters in New York. In its second year now, the CSW Youth Forum will convene nearly 1000 youth leaders and activists from around the world, and produce a Youth Declaration, anchored in the voices and experiences of young people, to inform discussions at CSW61 on its priority theme of “Women’s Economic Empowerment in the changing world of work”. [See the programme flyer]

Young Women as an Economic Force event on 11 March

Opening Ceremony and Plenary on 11 March

“Every generation has a mission, to fulfill or to betray (Frantz Fanon)…Ours is to end gender equality," said Executive Director Phumzile Mlambo-Ngcuka, opening the CSW Youth Forum. 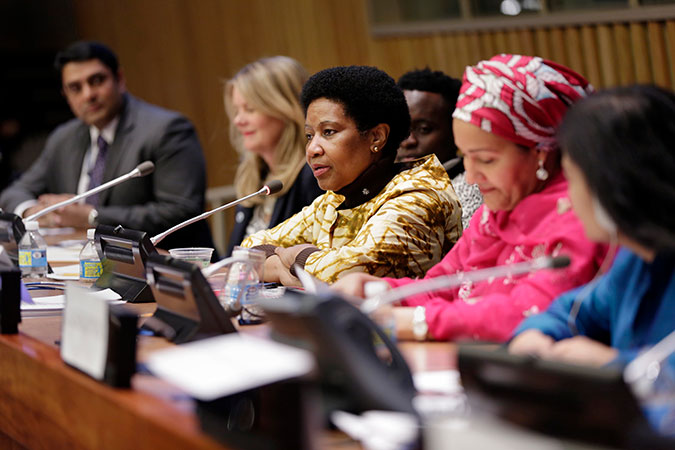 “My job description is simple: it's about a world that I want to build, where all the boys and girls have the choice to make their dreams a reality,” said Amina Mohammed, Deputy Secretary-General of the United Nations. “Building a better world wouldn’t happen on its own. The good news is, we have a plan. It's called the 2030 agenda." 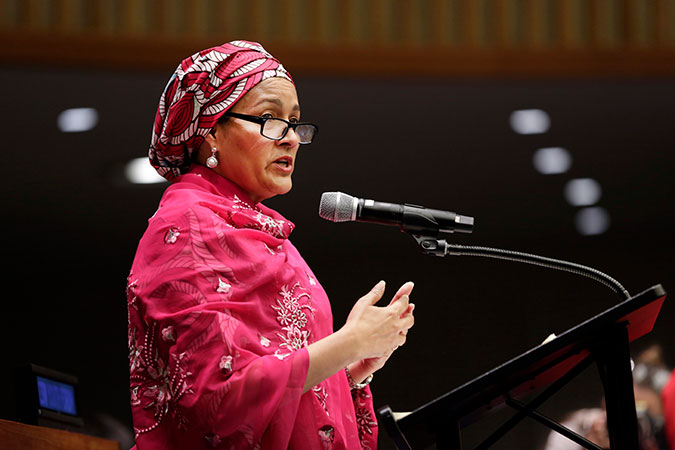 “Your voice matters. Use it! This is your world, your space. Demand it, claim it, enjoy it, live it and transform it!”- DED Puri #YouthCSW61 pic.twitter.com/apK2sD0nuC

“The future envisioned for humanity and our shared planet— Planet 5050 by 2030—across all 17 Sustainable Development Goals, rests on fully freeing the power and economic and political potential of young women and girls,” said UN Women Deputy Executive Director Lakshmi Puri. Read her full speech>> 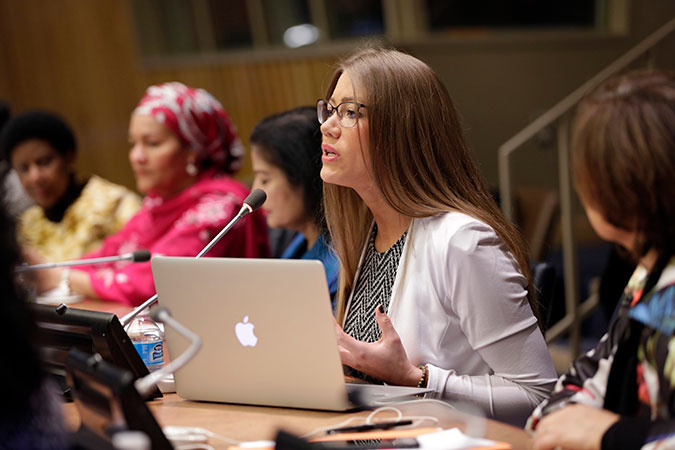 “There is no gender prejudice in technology, no judgment," disability rights activist and UN Women Youth Champion, Casar Jacobson talked about the power of technology in ensuring that no one is left behind.

The first plenary of the day focused on the young women’s leadership as a key enabler for ensuring that the changing world of work works for all women. Panellists stressed that young women’s leadership starts with education, from the home to school, to decision-making positions; and investing in girls’ education and leadership from an early age is key. The panellists also discussed issues like self-esteem and body confidence, and removing barriers, such as sexual harassment and gender discrimination.

"No one is born to be a leader. That's why you need to invest in young girls…In my association, the girls start young and we make sure they have the opportunity to lead," said Zoelisoa Rakotomanana, member of Girl Scouts of Madagascar.

"We have never reached anything good by excluding people. We are all needed"-Micah Grzywnowicz speaks for #LGBTQI communities at #YouthCSW61 pic.twitter.com/AX9YFkXuXe

An International Labour Organization study of 10 countries found that young men were more likely than young women to obtain stable employment and find formal work[1]. The World Youth Report of 2016 showed that globally, youth entrepreneurship is still most common among older male youth, with self-employment being least likely among younger women.[2] The second plenary of the day tackled the issue of young women’s economic empowerment, and debated on the key factors that can accelerate progress and barriers that must be removed. For example, panellists noted that even where more girls and young women are receiving education, it is not leading to better or decent work for youth, particularly young women. Female entrepreneurs need to have easier access to markets, finances and benefit from science and technology. The private sector can play a significant role by creating enabling policies, such as paid parental leave.

"When it comes to economic empowerment of women, I think it's not about the resources…it's about education,” said Gulalai Ismail, human rights activist, founder and chair of Aware Girls. “There are so many countries who still think that buying guns and missiles is more important and more profitable than building schools."

"Entrepreneurship is not only for entrepreneurs. It's for all of us. It's for anybody who is transforming communities,” said Manav Subodh (on behalf of Swati Subodh).

Day one of the Youth Forum closed with the launch of CEDAW for Youth, a publication by UN Women that explains why CEDAW (the women’s human rights treaty) is important to youth and describes its impact in advancing gender equality and human rights for women and girls around the world, including young women and girls. Download the publication>>

Youth-friendly Convention on Elimination of All Forms of Discrimination Against Women (CEDAW) launchedhttps://t.co/hDxsmXRSbV @UN_Women @UN pic.twitter.com/DuzVYrxoOg

Speaking about the need for youth-friendly versions of international instruments like CEDAW for gender justice, Deputy Director Lakshmi Puri said: “One of the biggest problems we have is that we have all these commitments, political investments, but young women don’t know about them, so they cannot claim their rights.”

Day two of the Youth Forum started with a focus on engaging men and boys to advocate for gender equality. UN Women’s Elizabeth Nyamayaro, who started the HeforShe movement, delivered the opening remarks, sharing her own experience of inequality and why it is critical for all of society to work on ending gender inequality. The plenary featured male youth activists from around the world who shared how they became feminists and stressed that for them, feminism is about transforming masculinity. They encouraged men to take the space in the society they already have and transform them into feminist spaces.

"I was the first non-binary person to win a leader’s award from her majesty Queen Elizabeth last year. I want a second; I want a third; I want a twentieth; I want a thirtieth," said Jacob Thomas, LGBTQA activist, talking about the importance of equality for everyone, across all gender identities.

Here is one of the many inspiring young activists that are honouring us with their participation at #YouthCSW61. Meet @jacobthomasaust! pic.twitter.com/RzwoRskH1J

"We are trying to show that the socialization process happens at a very young age," said Musa Hove from SAfAIDS and Country Coordinator of MenEngage Alliance Zimbabwe. “We are also working with political, religious and traditional leaders, because we believe these are the gatekeepers of this patriarchal society."

Alexander Munive, Director of Gender Equality and Social Inclusion, Plan International drew attention to different approaches for engaging men and boys, especially teenagers: "We use media, advertisement, sports and many other things. It’s about how the structures, the institutions and the family really affect young people in their understanding of gender equality."

As democratic spaces shrink around the world and activism intensifies, the last plenary of the Forum discussed why intergenerational partnerships are critical to achieve gender equality and sustainable development.

“We have had many achievements, but they have not been fast enough, deep enough and they haven’t been irreversible,” said Lopa Banerjee, Chief of UN Women’s Civil Society Section, opening the panel. She pointed to the need for a “feminist movement for gender equality with all actors,” and “changing the systems of power even within the feminist movement,” so that partners across generations can come together and advance the common agenda of gender equality.

"@GermanyUN wants to make #CSW61 more inclusive, but there are already many ways to influence outcomes. Use them!"- A. Glossner #YouthCSW61 pic.twitter.com/X3GTA8L5Nd

Hannah Woodward, from the Girl Guides of Australia outlined the challenges of intergenerational partnerships: “At the root of the challenges are assumptions and stereotypes that different generations have about each other.” She stressed on examining these stereotypes and creating intentional spaces for girls’ participation.

Nyaradzayi Gumbodzvanda, Chief Executive Officer of Rozaria Memorial Trust, Zimbabwe, and AU Goodwill Ambassador to Ending Child Marriage talked about what’s different about intergenerational partnerships: “Intergenerational partnerships recognizes that today’s world is young and female. Therefore, without taking in the full perspectives [of younger generations], it’s not possible to achieve the SDGs.” She also stressed, it’s important to change the way we think about partnerships, with “resources for young people’s full participation.”

In the closing of the Forum, youth embraced cross-sectoral, intergenerational and multicultural approach to achieve gender equality. Addressing the participants at the closing panel, UN Women Executive Director Phumzile Mlambo-Ngcuka said: "The second year of the Youth CSW is changing what UN Women is all about, for the better. You are the living proof that diversity is strength. This is the feminist movement of the future." 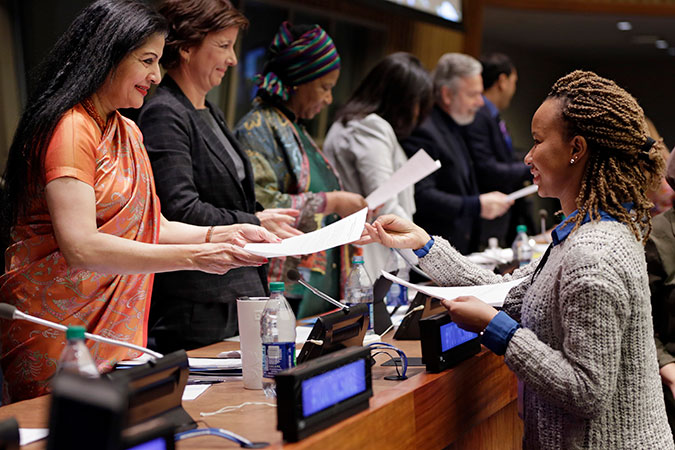 Youth hand over their Declaration to the panellists at the closing of CSW61 Youth Forum. Photo: UN Women/Ryan Brown

The Youth Declaration emerging from this Forum will incorporate the inputs and experiences of youth from across the globe, and submitted to the UN Commission on the Status of Women, starting on 13 March. Read the youth declaration» 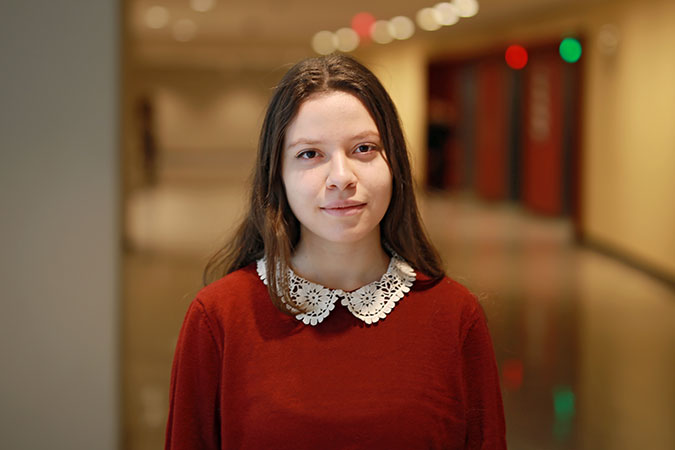 From where I stand: “One day, I want to wake up to find gender equality is real”
Hayfa Sdiri has created a platform for Tunisian youth, connecting entrepreneurs with ideas, skills and funders. More» 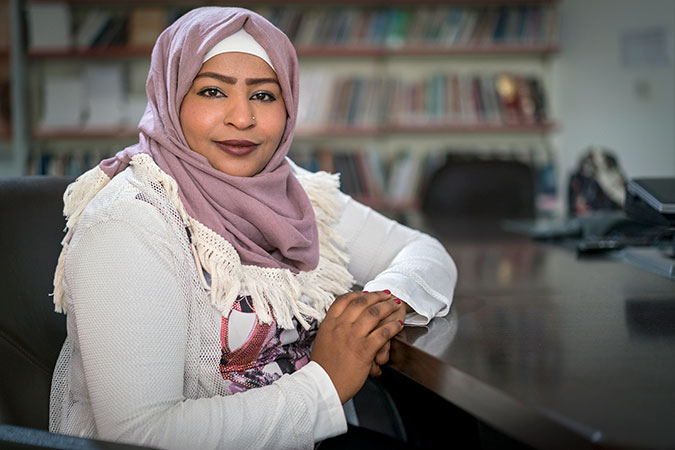 From where I stand: “I made history by becoming the youngest City Council member”
Abla Al Hajaia on winning elections as a young woman and her work with the community. More» 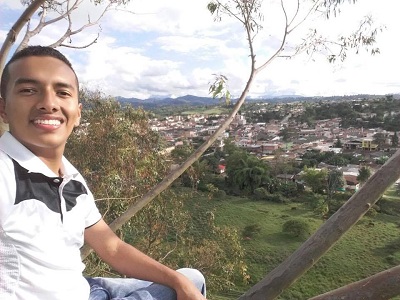 In Timbio, Colombia, youth take a stand against street harassment
A workshop organized by UN Women to prevent violence against women and build non-violent masculinities led to the development and adoption of a Municipal Decree by the Mayor, to sensitize the public and prevent all forms of violence and discrimination against women, including street harassment. More» 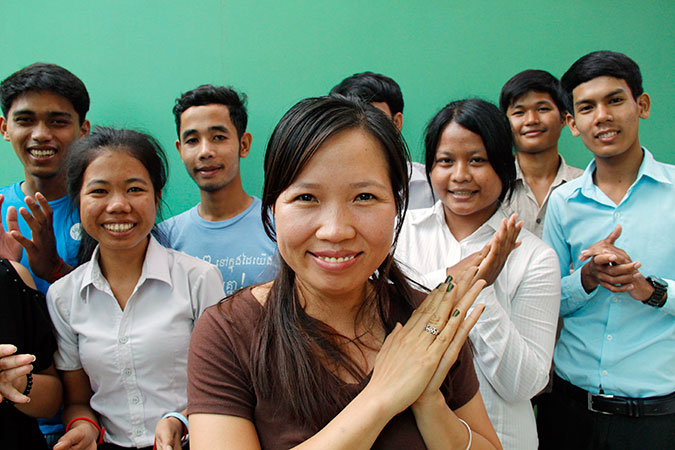 From where I stand: “I sold my gold earrings to pay for the first year of university”
Sinet Seap, 31, is a youth activist from Kandal Province, Cambodia. She has worked with the civil society organization Youth Resource Development Programme and UN Women Cambodia on engaging youth, particularly young women. More» 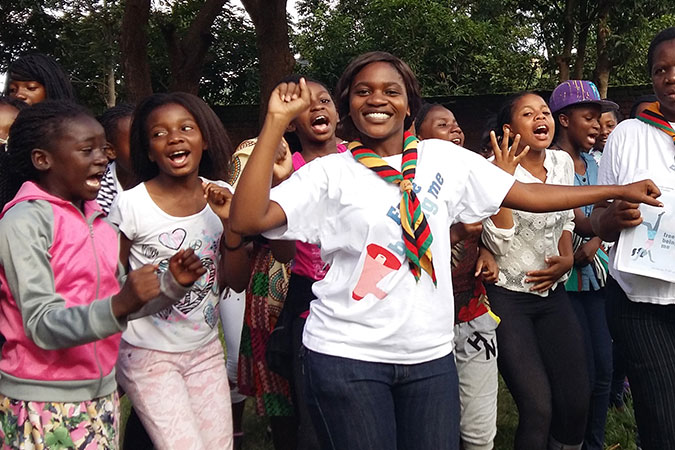 From where I stand: “When you stop violence against girls, they can change this world for better”
Elizabeth Chatuwa, 28, has been a Girl Guide since she was 10 years old. Today, she is the District Youth Commissioner for the Malawi Girl Guides Association. She mentors girls and assists youth leaders in delivering programmes, including the Voices against Violence curriculum, to make girls and young women aware of their rights, to prevent child marriage and other forms of violence and to encourage girls to stay in school. More» 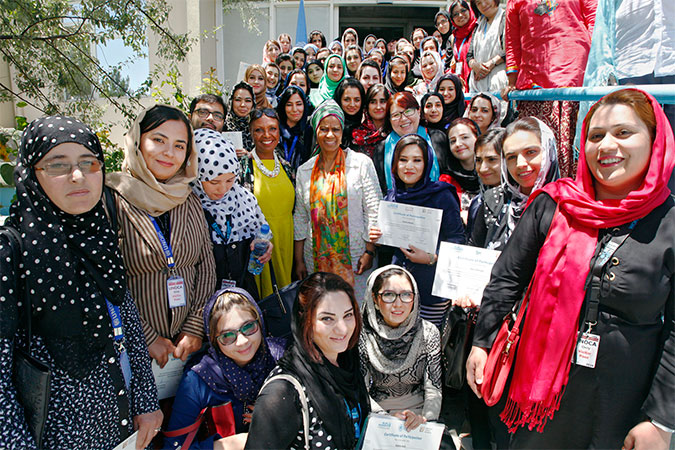 Unlocking the potential of Afghan women
The path to economic empowerment for Afghan women remains riddled with discrimination, violence and unequal access to opportunities. The biggest hurdle in front of them are negative perceptions and stereotypes. A programme by UN Women provides skills training and internship opportunities to young women graduates to kick-start their careers. More»