Press Release: UN Commission on the Status of Women provides roadmap to women’s full and equal participation in the economy 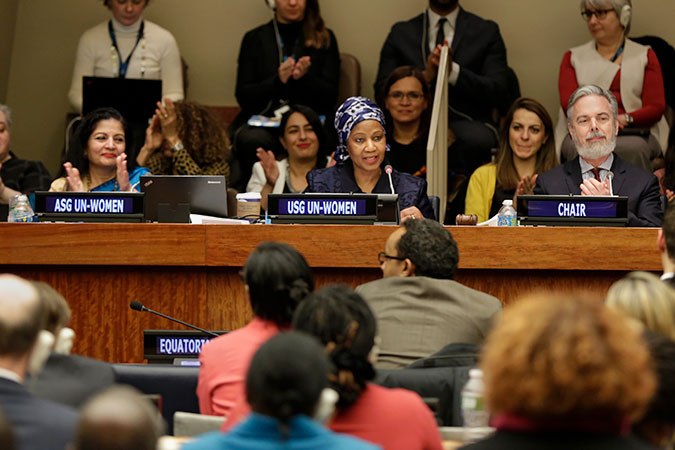 Closing of the 61st session of the UN Commission on the Status of Women. Photo: UN Women/Ryan Brown

(New York, 24 March)—UN Member States today committed to ensure women’s full and equal participation and leadership in the economy, as well as women’s right to work and rights at work, as a vital step to achieving sustainable development. This strong pledge to women’s economic empowerment came at the closing of the 61st session of the UN Commission on the Status of Women (CSW61), the two-week meeting that concluded today.

The Agreed Conclusions from the UN’s largest gathering on gender equality, women’s empowerment and women’s rights highlight barriers that women face, such as unequal working conditions, women’s over-representation in the informal economy, gender stereotypes and social norms that reinforce women’s concentration in certain sectors, such as health and social sectors, and the uneven share of unpaid care work that women do.

#CSW61 Agreed Conclusions have been ADOPTED by consensus! pic.twitter.com/u2LwBW27hc

Despite the long-standing existence of international labour standards on equal pay, the gender pay gap, which currently stands at 23 per cent globally, persists in all countries. Member States expressed concern over this and the persistently low wages paid to women, which are often below decent living wages. In the final agreement, they commit to the implementation of equal pay policies through social dialogue, collective bargaining, job evaluations and gender pay audits, among other measures.

At the same time, CSW members acknowledged that providing equal pay and social protection will create decent work for paid care and domestic workers.  Fast developing new technologies and sectors present new employment opportunities for women, but that they need to be provided with access to relevant education and training.

“This Commission has engaged strongly, comprehensively and constructively over the last two weeks in considering the most effective ways in which to bring about change for women in the world of work,” said Phumzile Mlambo-Ngcuka, UN Women Executive Director, in welcoming the Agreed Conclusions. “We have heard from all quarters the accepted imperative to put this knowledge into practice. It will take action throughout society; by all those who spoke to represent the commitment of young and older, of civil society and parliamentarians, of men and women alike, to embrace the great promise of finally making space for women to thrive. There has never been any excuse for the inequality that exists. Now we are seeing a healthy intolerance for inequality grow into firm and positive change.”

Well deserved applause 👏🏻 as we all agreed to adopt #CSW61 agreed conclusions after over 100 hours of negotiations #genderEquality 🚺 pic.twitter.com/UniJXNnH5n

This year’s Commission saw the attendance of 162 Member States, including 89 representatives at the Ministerial level. Over 3,900 representatives from 580 civil society organizations came to New York from 138 countries, attesting to the growing strength and unity of women’s voices around the world.

Underlining that women’s careers should not experience any disadvantage because of pregnancy and motherhood, the Agreed Conclusions stress the need to ensure that both women and men have access to paid parental leave and to promote men's usage of such allowances.

Measures such as increased flexibility in working arrangements; facilitation of breastfeeding for working mothers; development of infrastructure and technology; the provision of affordable and quality care facilities for children and other dependents; and adapting education systems to allow pregnant adolescents, as well as single mothers, to continue and complete their education; are highlighted by the Commission to advance women’s economic empowerment. Legal and policy frameworks must also be enforced to end sexual harassment at the work place. The Commission recognized the importance of women’s access to sexual and reproductive health-care services to enable them to participate fully in the labour force.

"This is a message about leaving no one behind." - @phumzileunwomen. More about adopted #CSW61 Agreed Conclusions: https://t.co/zpf5Lef8TS pic.twitter.com/Cxka7AfADK

For the first time, the transition of informal and domestic workers into the formal economy was a key issue of discussion for the Commission, whose members agreed on the need of promoting decent work and paid care in the public and private sectors; increasing the provision of social protection and wages that guarantee an adequate standard of living; and ensuring safe working conditions for women.  This comes as a matter of concern as many migrant women employed in the informal economy and in less skilled work are especially vulnerable to abuse and exploitation. The Commission recognized the positive contributions of migrants and called for gender-responsive migration policies that promote migrant women’s economic empowerment.

The Agreed Conclusions of CSW61 will be made available here shortly.

Related News
28/03/2018
Voices from CSW62
16/03/2018
Civil Society calls to leave no woman or girl in rural communities behind in the quest for gender equality
12/04/2017
Towards a global compact on migration that works for migrant women
26/03/2017
“The outcomes of CSW61 are important building blocks”—Executive Director
20/03/2017
Young women call for increased women’s leadership, and change in the world of work
END_OF_DOCUMENT_TOKEN_TO_BE_REPLACED