In the words of Tarcila Rivera Zea: “My parents, illiterate as they were, pushed to learn more” 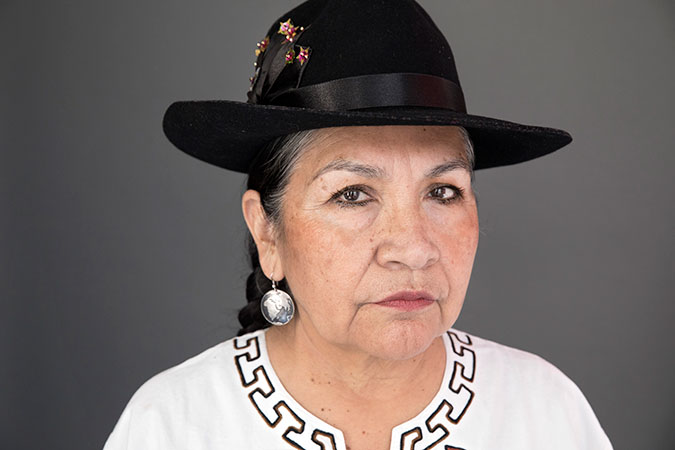 Tarcila Rivera Zea is a Quechuan activist from Ayacucho, Peru, and Founder of the organization Chirapaq, and leader in the movement of indigenous women of the Americas. From 2013 – 2015, UN Women’s Fund for Gender Equality has supported Chirapaq’s work on strengthening rural indigenous women’s economic empowerment. Ms. Rivera Zea was recently elected to the UN’s Permanent Forum on Indigenous Issues. She is a journalist by profession and for more than 30 years has worked as an activist for indigenous peoples' rights, particularly those related to women, children and indigenous youth in national and international areas.

I was only eight years old when I had to leave my family in the quetchua community in Ayacucho, Peru, for the outskirts of Lima. I had managed to learn Spanish by myself, and my primary school teacher took me in to live with her family and to help with the chores in her home. All I received in exchange were some old clothes and whatever food was left on the table. I was not even allowed to sit at the table with them, or eat with the same cutlery, let alone receive visits from my school friends.

The discrimination I endured as an indigenous girl followed me into womanhood. When I managed to enter Peru’s National Institute of Culture after a rigorous competitive process, my colleagues complained that I was not cooperative enough. How could I, when they would not stop saying that the sweat of my hands would discolour the keyboard of our typing machines?

What got me through those moments was a story that my parents had shared with me since I was a little girl. I could almost visualize it: the helplessness of my parents after losing my new-born brother and not being able to pursue any legal inquiry about his death, simply because they did not speak Spanish or know how to read and write. My illiterate parents pushed me to learn more, to see more and to do more. So, I persevered.

I got scholarships to study abroad and joined the indigenous movement. I volunteered as a journalist, exposing the discrimination and abuses that indigenous women and girls endured. I brought to light the cases of women coming out of prison with children of rapes they had endured while in prison. None of these women knew they had the right to denounce and report the violence they had experienced. It had become a normal part of their lives…because they were indigenous and women.

Chirapaq, the non-profit I founded together with Juanita del Rosal, was born in 1986 to support the cultural reaffirmation of indigenous peoples with a strong human rights approach. Because I could not talk about culture without talking about its people, and its people were being discriminated, attacked and killed. Indigenous women not only need the same opportunities as everyone else, they need specific opportunities to affirm their identity and become aware of their own rights.

With the onslaught of climate change, unexpected and frequent draughts, floods and severe weather conditions are affecting the production of crops and food security of indigenous peoples. Indigenous women—not unlike other rural women—are often farmers and in charge of feeding their families. Their livelihood—and lives—are at stake.  As part of the Chirapaq programmes, we try to ensure that indigenous women can cope with climate change sustainably, for example, by using organic insecticides, natural fertilizers, and resilient seeds, and by helping them develop a nutrient-filled diet with the food that they can access.

I am 66 years old now. In the next few years I plan to focus on amplifying the voices of indigenous women, so that they know what their rights are, and can claim them."