In villages across Kyrgyzstan, rural women are taking charge of their lives and livelihoods after completing leadership and skills training programmes. Most of the participants are now running small-scale businesses and some have joined local councils to shape laws and policies. 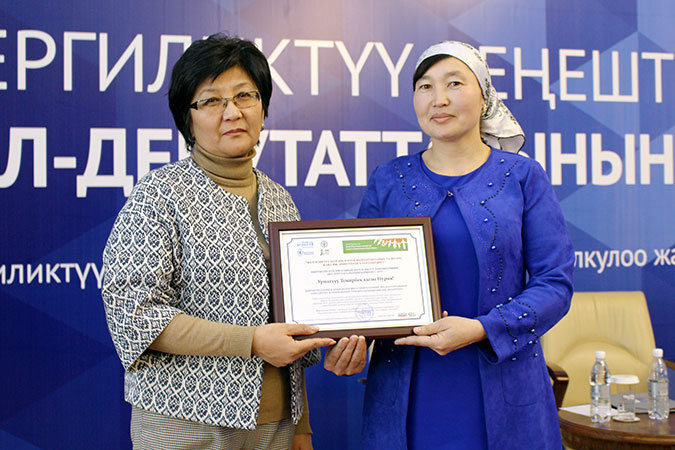 Taalaigul Isakunova, Minister of Labour and Social Development of the Kyrgyz Republic, is congratulates Nuriya Temirbek kyzy for being elected as a deputy of a local council. Photo: UN Women/Meriza Emilbekova

Nuriya Temirbek kyzy, a 40-year-old mother of three from Naryn, a region in central Kyrgyzstan, used to be a housewife. Although she worked all day, taking care of her family, she had less decision-making power since she didn’t earn an income. Today, her situation is vastly different. In 2016, Temirbek kyzy was elected as a member of the Ak-jara village local council, where she actively advocates for women’s rights.

Temirbek kyzy is among 1,500 rural women across 45 villages in Kyrgyzstan who have received training from the ‘Accelerating Progress Towards Economic Empowerment of Rural Women’ (RWEE) project implemented by UN Women, WFP, FAO and IFAD since 2014. In the Naryn region, where Temirbek kyzy lives, the poverty level is 38 per cent—higher than the national average of 32.1 per cent—and women earn 3.8 per cent less than men (as per the National Statistical Committee, 2015). The project aims to increase income opportunities and enhance leadership skills of rural women. The participants received training on women’s economic empowerment, including gender-responsive budgeting, sustainable farming, and livelihood skills—such as handcraft, photo and cellphone repair services, baking and sewing. Of the 1,500 women who benefited from the training, 805 are now running small scale businesses and have increased their income by 29.5 per cent on average.

For Temirbek kyzy, the training paved the way towards economic independence and a decision-making role. “After the training, my view of life changed. I realized that I could also make a difference and help bring about positive change, not only within my family, but also in my community. As my self-confidence grew and I got to know more people, I realized many women supported me. I decided to run for local elections.”

In 2016, Temirbek kyzy was elected as member of a local council, coming fifth place among 39 candidates, with 225 votes. The election victory galvanized her activism. She says, “This gave me a lot of strength and energized me to further work for women’s rights and to empower rural women.” 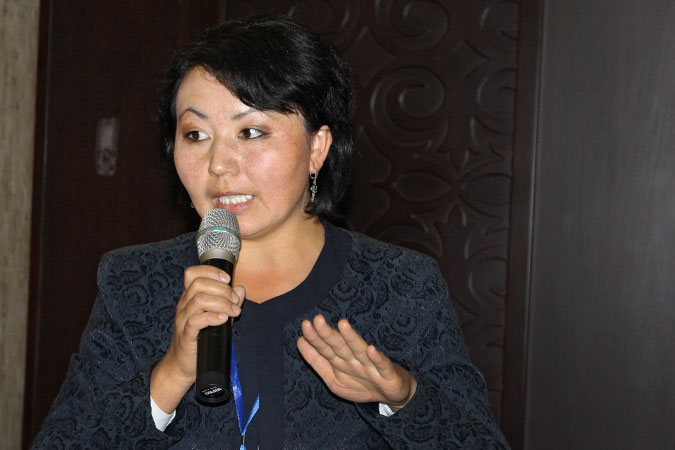 Tursunay Akmatova, a 33-year-old mother of three and a primary school teacher from Baizak village in Naryn, also benefited from the same project. The training enabled her to set up a greenhouse business as an additional source of income to support her family, while empowering her politically to advocate for the rights of rural women.

“I used to work as a primary school teacher, but my salary was insufficient to support a family with three children. My husband did not have a permanent job, so often we struggled to make ends meet,” recalls Akmatova. In 2014, after attending the RWEE training, she established a self-help group with other women and decided to grow and sell vegetables. “We live in a high mountainous area and never imagined that we could grow vegetables in such challenging climate conditions,” explains Akmatova. “Today, our group owns a greenhouse, where we can grow vegetables all year around and receive a sustainable income. Our business is so profitable that we can now afford all the necessities for our households. We plan to expand and involve more rural women in our agricultural business.”

Economic prosperity has yielded social and political dividends for the women of the collective. Akmatova, for example, has taken on an active political role: “I decided to run for community council elections to address the numerous challenges faced by rural women, and I recently won!. I will focus on developing rural infrastructure and opening a community kindergarten,” she says.

One of the successes of the project is its holistic approach to promoting gender equality, while tackling rural poverty and improving food security. “Thanks to the multidimensional approach applied in the joint programme, with four agencies bringing their unique expertise in one package, we are seeing positive changes across the nutritional, economic, social and political aspects of rural women’s lives,” says Jipara Turmamatova, UN Women project coordinator. “Rural women are not only taking charge of their lives and their families, but also contributing to community development and lobbying for changes in the national legislation, showing their often-untapped potential for leading sustainable development in the country”. Last year, the women successfully lobbied for changes in the national legislation to remove discriminatory measures that placed heavier social insurance tariffs on smallholder farmers, which often led women (who often had smaller land holdings than men) to transferring their land to male family members to avoid increased social insurance fees.

The project, funded generously by the Governments of Sweden and Norway, is set to conclude in October 2017, and has already benefitted 3,150 people through better access to resources and services. Two cooperatives and two local associations created by the project now serve at least 1,500 women members, and 15 gender-responsive strategies have been adopted since 32 women became members of the local councils.

Related News
30/01/2020
From where I stand: “Expanding economic opportunities of women is key to ensure safety and prosperity”
04/03/2019
Women in rural Kyrgyzstan bring change through water, technology and better infrastructure
29/08/2018
From where I stand: “We learned how to deal with conflicts in a constructive manner, transforming them into positive solutions”
05/03/2018
Sweden strengthens partnership to accelerate economic empowerment for rural women
02/03/2018
Youth in rural Kyrgyzstan champion gender equality and access to clean water
END_OF_DOCUMENT_TOKEN_TO_BE_REPLACED