In pastoral communities of Kenya, women bear the brunt of drought 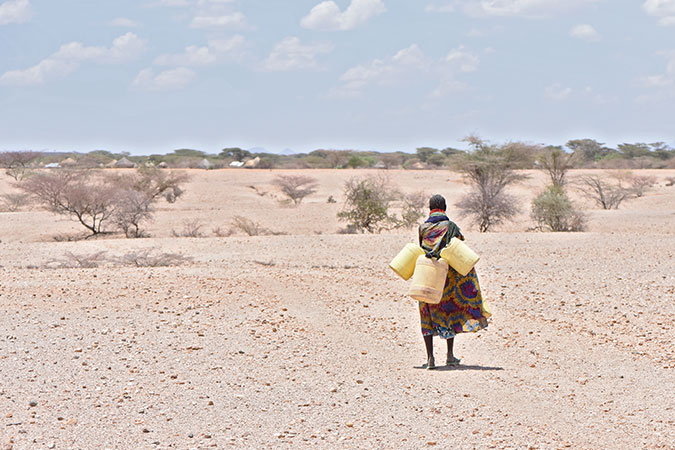 In the Turkana county of northern Kenya, walking miles and queuing at the water points has become a daily chore for many women.

“This is my routine three times a day,” says Paulina Epung’u, a resident of Lotureirei. “I have to fetch water for our use and for the goats and sheep too, as they are too weak to walk.”

Epung’u, 58 and a mother of seven, is one of the 2.7 million people affected by the on-going drought in the Horn of Africa. 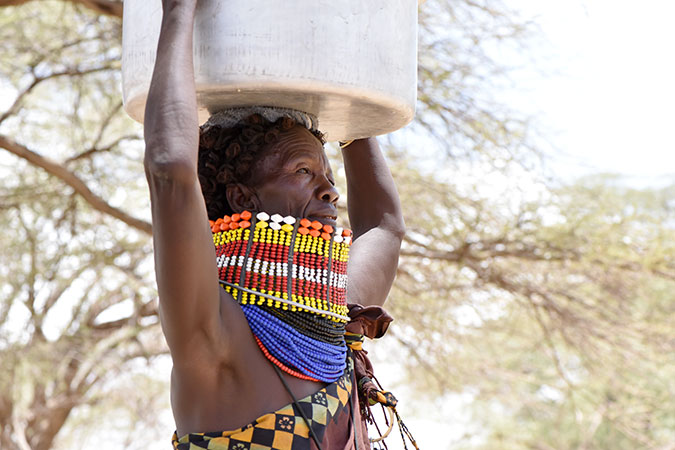 “On a good day, we get water from a solar water pump about a kilometre from here, but whenever the pump breaks down, we have to dig along the dry river beds for remnants of light showers.”

Some 10 kilometres away from Loturei, in Nakata Pan, Akidor Lopunga Nangiro, an elderly woman living with her two children, daughter-in-law and four grandchildren, can barely recall the last time they had meaningful rain.

“We just have light showers that disappear immediately,” Nangiro says. “We rely on livestock, which are now dying.”

Turkana county is one of the most arid areas of Kenya, and women bear the brunt of the impact of the ongoing drought. Not only are they in charge of supplying food for their families, they also contribute to their household income through gathering and selling firewood or gravel for construction in neighbouring towns.

"Here in Turkana we [used to] depend on our goats, camels and livestock for livelihood, but now we have to gather gravel and burn charcoal to sustain ourselves," shares Paulina Epung’u.

"We sometimes sell a bucket of gravel at 250 shillings, but this may take a week or two as the market for this is not guaranteed," said Akidor Lopunga Nangiro.

Three consecutive years of poor rains have exhausted people’s coping capacities, and intensifying conflicts over water and pasture are driving people out of the region—According to the UN Office for the Coordination of Humanitarian Affairs (OCHA), More than 20,000 Kenyans in Garissa and Turkana counties have been displaced by drought in 2017.

“Economic empowerment of women would reduce their vulnerability during such droughts,” explains Susan Aletia, Gender Advisor to the County Government of Turkana. “The government and society in general needs to give women space to do something on their own and compliment their family’s income”

The latest weather forecasts indicate below- to near-average rains this year, and the number of people severely food insecure is expected to rise further to four million according to UNICEF. The United Nations Food and Agriculture Organization (FAO) estimates that 42 percent of households in Turkana report skipping days without food.

Akidor Lopunga Nangiro’s household is a case in point— “We don’t have anything for lunch and even in the evening, it depends,” Nangiro says. “If we get it, fine, if we don’t, we will still sleep. Whenever we wake up, we do not anticipate any meal. On a good day, we have a single meal.” Due to prevailing gender inequalities, women and girls tend to experience higher food insecurity and malnutrition. When food is scarce, they often get even less food than male members of the household. 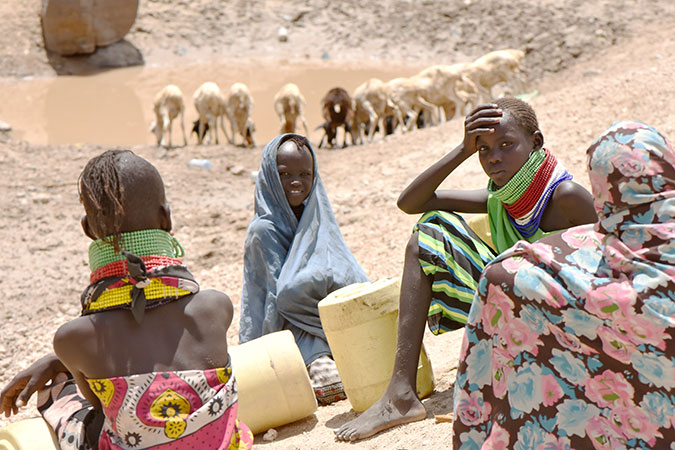 A dry river bed serves as a waterpoint for both humans and livestock. Photo: UN Women/Kennedy Okoth

On 10 Feb 2017, the Kenyan Government declared the drought a National Disaster, prompting the United Nations in Kenya to launch the US$ 165.8 million drought appeal. The funds would support livelihood interventions that could save lives, through rapid provision of animal feed and water, animal health programmes and timely purchase of animals for slaughter to protect the breeding herds while ensuring food security for communities that rely on livestock. According to OCHA, only US$ 54.5 million of the requested funds have come in.

UN Women is working with Kenya’s National Drought Management Authority to ensure that all interventions to address the drought take into considerations the unique vulnerabilities of women and children. “So far, UN Women has trained more than 60 staff working with the National Drought Management Authority to identify and address gender concerns during the drought response and recovery phases,” says UN Women Humanitarian and Disaster Risk Reduction Specialist, Beatrice Teya.

Going forward, UN Women will continue to work to strengthen government and other humanitarian institutions to ensure that the on-going humanitarian and resilience building programmes are gender-responsive.

Related News
19/08/2019
Not waiting for handouts: Five stories of resilience from one of the world’s largest refugee camps
19/08/2022
In Uganda, refugee women’s leadership drives inclusive humanitarian action
28/08/2019
From where I stand: “I think of my grandfather when I make Jikos”
18/06/2018
Resilient and empowered, South Sudanese refugee women find new beginnings in Uganda
23/08/2017
From where I stand: “I want the women in this country to be on equal footing with men”
END_OF_DOCUMENT_TOKEN_TO_BE_REPLACED