Malian artists take a stand to end violence against women 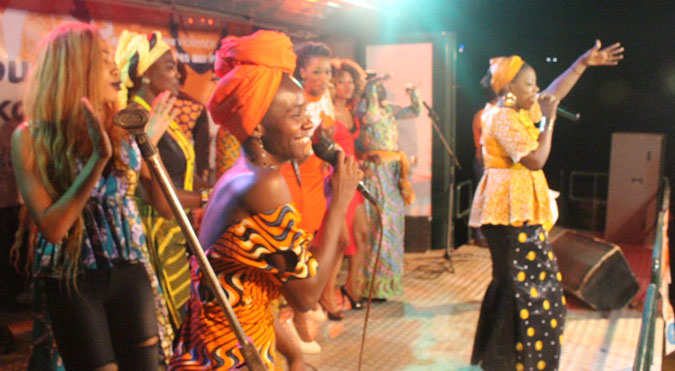 “We are women from here; women of Africa; strong women, proud women, loved women; and we say no to violence against women,” sang Pamela Badjogo on 7 April, 2017, in a packed concert in Mali, as part of the Moussoya ye Koba Ye’ programme, supported by UN Women.

Launched in April 2017 by a group of young women artists from different parts of Africa, the ‘Moussoya ye Koba Ye’ programme (meaning “It’s a great thing to be a woman”) aims to engage youth to take a stand against gender-based violence in Mali. The initiative is funded by the Embassy of Canada.

Badjogo, 35, a local Malian artist herself, also serves as the project manager and spokesperson of the programme. "Are you a girl? A woman? You have sisters? A family? You are a man and you support women? I invite you to come support us for this programme,” announced Badjogo, in front of an audience of over 200 people at the concert. 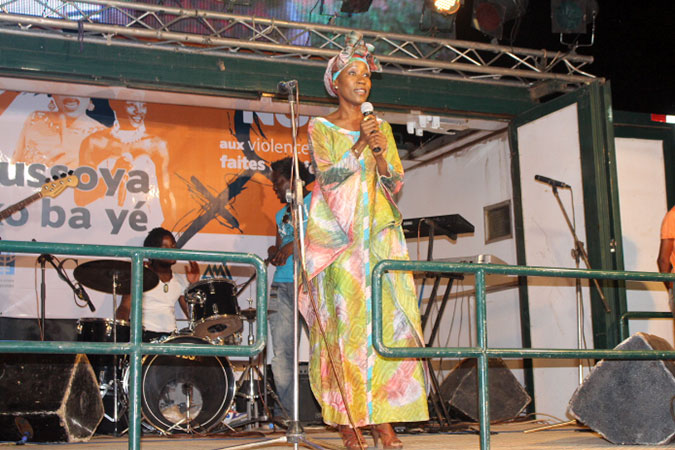 To date, more than twenty young artists, men and women—musicians, producers, photographers and comedians have joined the group, including the renown Malian artist, Rokia Traore, who champions the initiative.

For Aminata Daniogo, (aka Amy Yerewolo), a leading member of the programme, involving men in this cause is a must: "I invite all men and women to support the feminist cause, the noblest cause."

"No woman deserves to be raped, or be submitted to female genital mutilation, or any barbaric blows and wounds," implored Doussou Bagayoko, another Malian artist, who also performed at the concert.

Through musical concerts and more, the programme is successfully sensitizing Malian youth about domestic violence, which is often trivialized in Mali, and encouraging them to reject the practice of female genital mutilation. It is also building alliances with men and supporting them to speak out against such violence as part of UN Women's HeForShe campaign.

"We are in Mali, where the man is the head of the family,” said Coumba Bah, UN Women Communication and Partnership Officer. “It is vital that men agree to say no to violence against women and girls.” 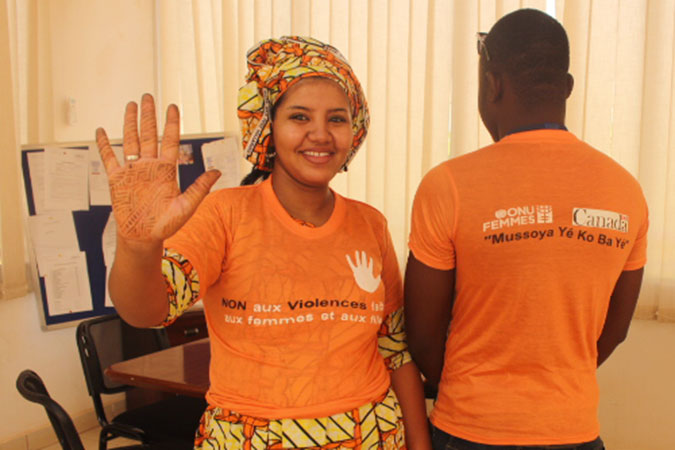 “The woman is the mainstay of the family. The very happiness of the family rests on her, so we are asking everyone to join us in saying no to violence against women and girls in Mali," added Oumou Bella Boré, Gender-based Violence Programme Manager at UN Women Mali.

Following the successful concert in April, the artists are now working on a traveling exhibition entitled, "Moussoya yé Kô bayé", which will feature photographs and testimonies of women survivors. The exhibit will be launched at the French Institute of Mali during the 16 days of Activism against Gender-Based Violence Campaign in November.

Related News
09/08/2021
I am Generation Equality: Immaculate Akello, climate change activist and lawyer standing up for rural women
16/07/2021
From where I stand: “It is everybody’s responsibility to take action”
28/04/2021
Take five: Young women leaders in Malawi are ready to build back better from COVID-19
16/11/2020
Hand over the mic to: Aisha, Kenya
07/01/2019
Getting Fatouma back to school
END_OF_DOCUMENT_TOKEN_TO_BE_REPLACED