HeForShe partners with the Scout Movement to advance gender equality 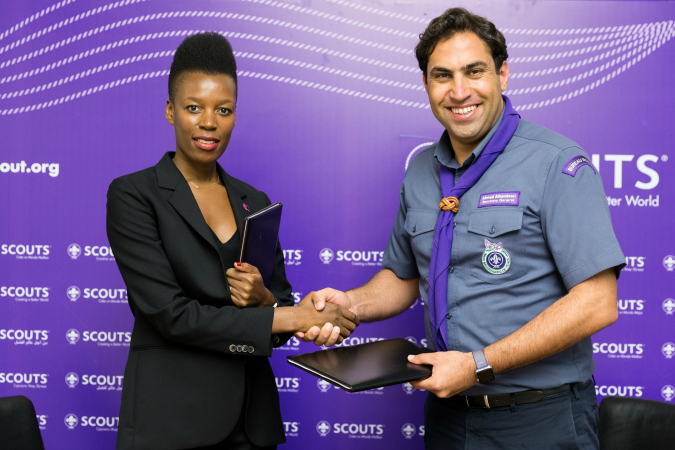 Elizabeth Nyamayaro, Senior Advisor to the Executive Director of UN Women and Head of HeForShe, and Ahmad Alhendawi, Secretary-General of the World Organization of the Scout Movement. Photo: HeforShe

They learn how to cook in the wild, care for the environment, and problem-solve in difficult circumstances. But the world’s 50 million Scouts are taught much more than that. They learn the values and personal skills that make the world a better place. At the 41st World Scout Conference in Baku, Azerbaijan, the Scout Movement added another dimension to the richness of what it means to be a Scout. Through a new partnership with UN Women’s HeForShe initiative, millions of Scouts all over the globe will strive for a more gender-equal world.

Over the next three years, both organizations will collaborate to increase awareness about gender equality and women’s empowerment, and inspire young people to take action. Moreover, all 50 million Scouts are expected to commit to HeForShe by 2020.

“HeForShe is incredibly excited about teaming up with the Scout Movement. While gender norms are formed very young, it is also often young people who ask the best questions like: ‘Why can’t things be better?’ or ‘Shouldn’t we all have the same opportunities?’,” said Elizabeth Nyamayaro, the Senior Advisor to the Executive Director of UN Women and Head of the HeForShe initiative. “We believe harnessing the energy of the world’s Scouts toward gender equality has the potential to change how the next generation approaches issues of gender, rights and equality.”

The Scout Movement endeavors to have 100 million young people creating positive change in their communities by 2023. Secretary-General of the World Organization of the Scout Movement (WOSM), Ahmad Alhendawi, said of the new partnership, “I’m honoured to pledge my support for the HeForShe initiative, and I invite everyone in the Scout Movement to join me. Let’s take action toward achieving gender equality and creating a better world!”

The reactions from some Scouts speaking out on social media was also very enthusiastic, with one young Scout commenting, “As a scout and HeForShe advocate, recognizing the power of the two... this couldn't make me more proud and hopeful.”