The Supreme Court of India gave a landmark judgment on 22 August, declaring the practice of unilateral and instantaneous triple talaq under the Muslim personal law unconstitutional by a 3:2 majority. The triple talaq is a practice under which a Muslim man can instantly divorce his wife by uttering the word “talaq” three times. The five-member bench delivering the historic judgement comprised of judges from different major faiths in India—Hinduism, Christianity, Islam, Sikhism and Zoroastrianism.

The Supreme Court judgment has been welcomed by women’s groups and hailed as being historic by the Government. The vulnerability and suffering of Muslim women caused by the triple talaq has been a part of the public debate for many years. The judgment comes two years after Shayara Bano approached the Apex Court after her husband of 15 years sent her a letter with talaq written thrice. Bano’s husband also took away her two children. Petitions of four other women were tagged with this case: Ishrat Jahan, the second petitioner from the state of West Bengal, was divorced over phone by her husband, who called from Dubai and uttered talaq thrice and disconnected. Gulshan Parween, the third petitioner from the state of Uttar Pradesh was divorced through a talaqnama or a divorce notice and rendered homeless after being allegedly subjected to domestic violence over dowry. Aafreen Rehman, also allegedly abused for dowry, received a speed post announcing the divorce. Atiya Sabri, another petitioner, was divorced on a piece of paper.

UN Women welcomes the judgment and its plausible positive impact on the lives of Muslim women in India. Immediately prior to the judgment, on 1 August, UN Women had facilitated a Roundtable Consultation with representatives from civil society, academia, government and religious leaders, for the Muslim Women’s Forum. The discussions focused on issues concerning the socio-economic status of Muslim women and the personal law framework, including the infamous triple talaq. 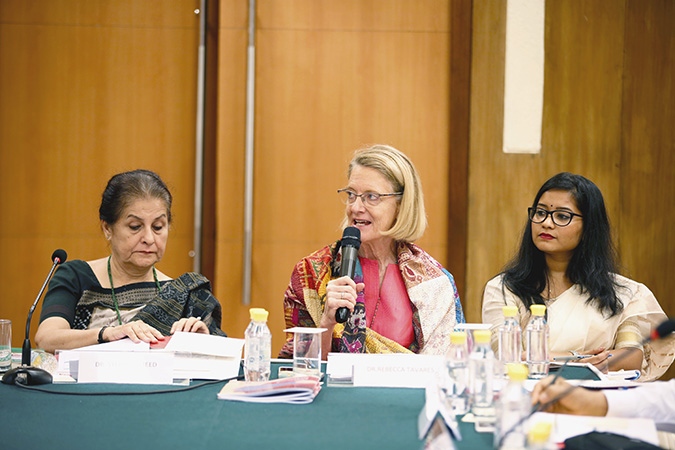 Speaking at the consultation, UN Women India Multi-Country Office Representative Rebecca Tavares emphasized, “Within the country, the SDGs cannot be achieved if anyone is left behind, which includes minority and other marginalized women and by the same token, the world can only achieve the SDGs if India achieves its goals”.

UN Women is committed to promoting equality and the rights of women from marginalized communities, including minority women in India. In 2016 ,UN Women initiated a needs assessment study for the Indian Ministry of Minority Affairs. The study brought to light the development priorities of minority women in select “Minority Concentration Districts” in six states of the country—Andhra Pradesh, Haryana, Karnataka, Madhya Pradesh, Odisha and Rajasthan.

UN Women partnered with a civil society organization, CSJ IDEAL, for an action research on ‘Assessing the Rights of and Entitlements of Women from Minority Communities’, involving the Rehnuma Centres. The Rehnuma Centres are socio-economic entitlement centres set up in Minority Concentrated Districts following the recommendations of the Sachar Committee, a committee set up by the former Indian Prime Minister Manmohan Singh to report on the latest social, economic and educational conditions of Muslims in India

Additionally, UN Women supported a study of the Prime Minister’s New 15 Points Programme in the states of Gujarat, Odisha, Tamil Nadu and Uttar Pradesh, to identify key gaps in policy conceptualization and implementation vis-à-vis the rights of minority women. The testimonies gathered as part of the study highlighted specific needs and priorities, such as: separate schools for girls, priority for women-headed households in all policy schemes, greater opportunities for employment and skill development, and enhanced budgetary commitment for Muslim women and girls.

Related News
11/02/2013
Abolishing Sang Chatti: Pakistan works to prevent compensation marriage and other forms of violence against women
22/09/2022
UN Women statement on the death of Mahsa Amini
15/08/2022
In focus: Women in Afghanistan one year after the Taliban takeover
15/08/2022
Statement: ‘Meticulously constructed policies of inequality’ – Afghanistan one year on
25/07/2022
Press briefing: The situation of women and girls in Afghanistan
END_OF_DOCUMENT_TOKEN_TO_BE_REPLACED