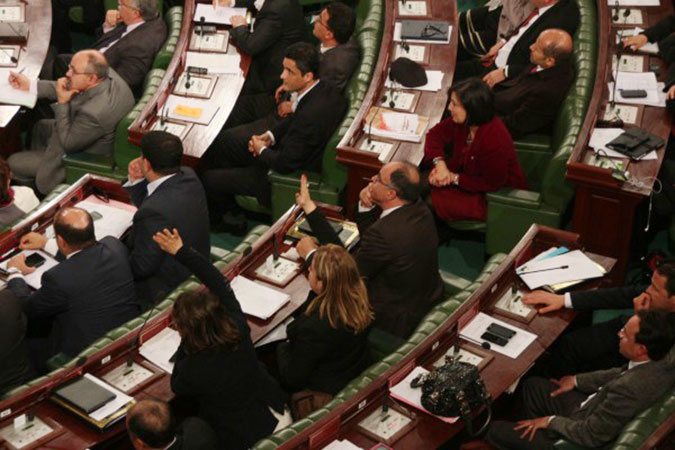 Tunisia made historic strides by passing its first national law to combat violence against women on 26 July, 2017. The long-awaited legislation, which passed with 146 votes out of 217 and zero abstentions, takes a comprehensive approach by combining measures for prevention of violence and support for survivors.

"As a Tunisian woman, I am very proud that this law has been adopted. This is the climax of the steps that began through the adoption of the Code of Personal Status in 1956,” announced Naziha Labidi, Minister of Women, Family and Childhood.

The new violence against women law adopts a broad definition of violence. In addition to physical violence, the law recognizes other forms of violence against women and girls, including economic, sexual, political and psychological. It also provides for new protection mechanisms that will enable survivors to access the necessary services and legal and psychological assistance. Furthermore, the law eliminates impunity for perpetrators of violence, for example, by amending the article 227 of the penal code, which pardoned a perpetrator of a sexual act with a minor when the perpetrator married his victim.

The passing of the law follows several years of advocacy efforts led by Tunisian civil society and national institutions, in collaboration with international organizations, including UN Women. Prior to this law, the only progressive legislation that promoted gender equality was the Code of Personal Status, which abolished polygamy, established the minimal age for marriage, introduced the requirement of mutual consent of both parties for a marriage, and created a judicial procedure for divorce.

Since 2014, UN Women has contributed to the review and finalization of the law on ending violence against women and provided recommendations, together with other international and UN partners, such as the Council of Europe and the European Union, UNDP, OHCHR, UNFPA and UNODC. UN Women also supported the development of advocacy tools, including a guidance for parliamentarians on the international standards to combat violence against women and an article-by-article analysis of the draft law which was then submitted by the UN System to the Assembly of People's Representatives (Tunisian parliament).

Pointing to several recent studies, including the national survey on violence against women in 2010, which estimated that nearly 50 per cent of Tunisian women have experienced violence in their lifetime, Member of Parliament, Bochra Belhaj Hmida said: "This is why the establishment of a legal framework against violence was needed. " She also stressed on the importance of education within the family and from an early age to prevent such violence.

“UN Women Maghreb is proud to have contributed to every step of this great success—from the very first drafting [of the law] in 2014, to the challenging debates that ensued. The law marks a major step towards achieving gender equality in Tunisia,” said Leila Rhiwi, UN Women Representative in Maghreb Multi-Country Office, adding: “I would like to stress the incredible mobilization, tenacity and perseverance of Tunisian civil society in this process. The sustainable and long term dialogue and partnerships that we built with them since 2014 is undoubtfully a key factor of this success.”

While passing of the law marks a significant step in the right direction, translating it into practice through appropriate implementation measures and resources will be key to making a tangible difference to women’s lives. Some mechanisms are already in place to assist the process—for example, under the project, "Creation of inter-sectorial mechanisms for the care of women victims of violence in Greater Tunisia 2014-2017", implemented by Tunisia’s National Office for Family and Population and the Ministry of Women, Family and Children and supported by UN Women, five Tunisian Ministries (Social Affairs, Justice, Women, Family and Children, the Interior and Health) adopted and signed multi-sectoral protocols in December 2016. The protocols constitute a set of procedural guidance and mechanisms to improve coordination among frontline service providers under these sectors to better serve survivors of violence, whose needs often encompass a full range of services, from justice to health and housing. Representatives from the five Ministries also meet every month to jointly follow up on individual cases of women survivors.

Related News
16/07/2019
Reforming the laws that forced women to marry their rapists
09/09/2015
New draft law to combat human trafficking brings hope in Morocco
20/02/2014
Positive developments for women’s empowerment and gender equality in Jordan – Executive Director
14/08/2012
One million sign to end violence against women in Pakistan
22/11/2022
In the words of Salma*: “We, as women and girls, deserve better.”
END_OF_DOCUMENT_TOKEN_TO_BE_REPLACED