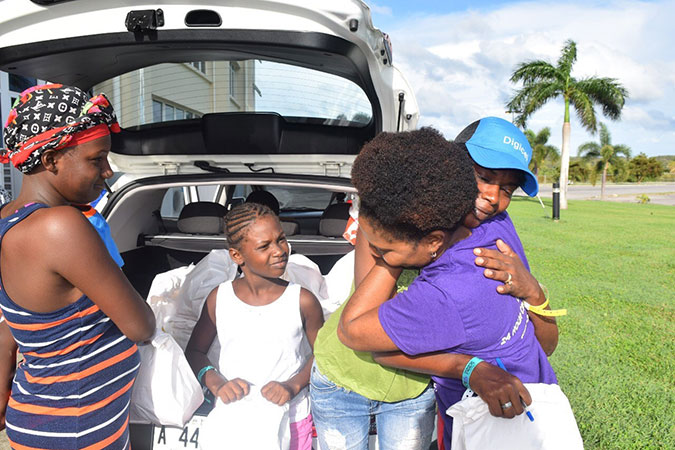 A joint effort by UN Women and UNFPA started the distribution of “dignity kits” containing basic health and hygiene products for displaced women and girls from the Caribbean island of Barbuda, as they arrived in Antigua, escaping Hurricane Irma.

The catastrophic hurricane has driven the entire population of Barbuda, a small island in the eastern Caribbean, to its twin island of Antigua. Of 1,413 people evacuated, more than 600— many of them women and girls with unique and often-overlooked needs, such as access to hygiene and sanitary products—are in temporary shelters. 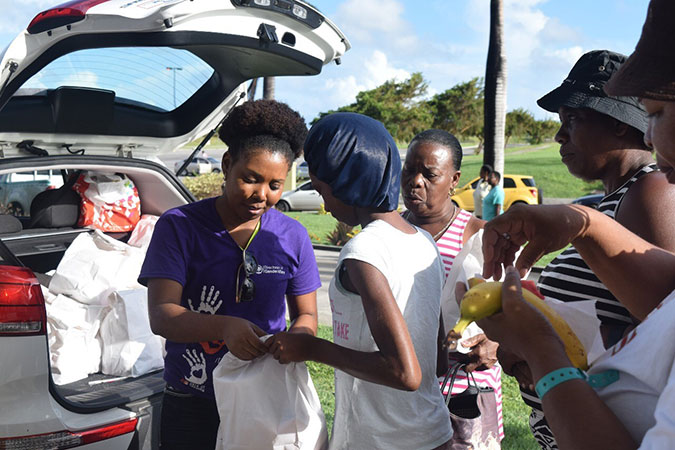 “There was a very huge need for [dignity kits] …because [although] there was mass distribution of different [aid] products and items, not a lot of focus and emphasis were placed on the sanitary items that women and girls needed in particular,” explained Farmala Jacobs, the acting Executive Director of the Directorate of Gender Affairs, the national gender machinery of Antigua and Barbuda.

At the aid distribution centre, as Ms. Jacobs talked to relief coordinators, displaced women ran up to her, because they had overheard about the dignity kit items and were looking for sanitary napkins and other products that women and girls urgently needed. 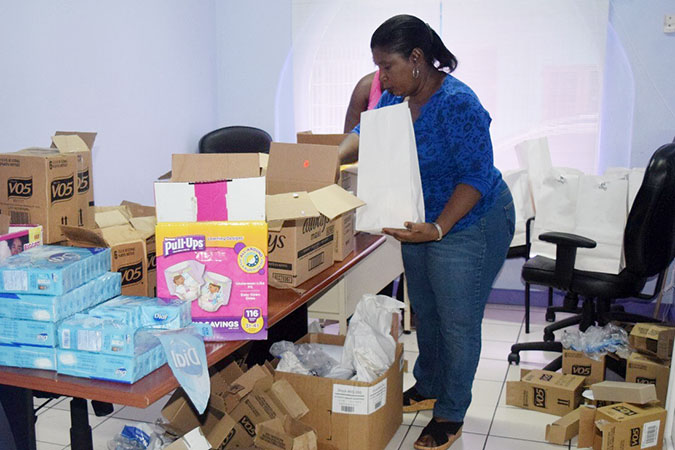 “UN Women knew we had to pull out all stops to ensure that once the population of Barbuda was evacuated, help would be on hand immediately for the women and girls who were displaced. Regrettably, we are not strangers to disaster recovery situations, so we moved swiftly and decisively to work with our UN partners and the national gender machinery in Antigua to jumpstart our relief effort. Our primary concern was the provision of items that could restore a measure of normalcy and dignity to women of all ages who would have been ripped from their homes. It was our duty,” said Alison McLean, UN Women Representative in the Caribbean.

With the first allocation of USD 15,000 from UN Women, which will be supplemented by UNFPA funds in the second tranche, 300 dignity kits were prepared by the Directorate of Gender Affairs. The kits contain basic health and hygiene products for women and girls, such as soap, underwear and sanitary napkins.

Shelter safety and security for women and girls

With Hurricane Jose still posing a threat, residents of Irma-ravaged Barbuda are being temporarily housed in shelters and private homes, some with family, in Antigua. As in most displacement settings, women and girls need protection from gender-based violence in crowded shelters.

Farmala Jacobs and her team are already on top of this, prioritizing the implementation of guidelines and protocols for sharing resources and spaces in the shelters to ensure the safety of women and girls:

“While we are distributing the kits to women personally, we are also using that opportunity to …ensure that all of the shelters protocols and guidelines are being followed... We are hoping [that] with UN Women’s support that we can also put the proper structure in place where there is monitoring of the shelters…as well as to ensure that the information that is needed is available to all the persons within the shelters about safety and prevention [of violence].”

Together with community volunteers, the Directorate of Gender Affairs worked under strenuous circumstances, even as the risk of storm surges loomed over the Caribbean island, to distribute 165 dignity kits on Friday evening, and to distribute the remaining 155 on Saturday.

With over 90 per cent of Barbuda’s infrastructure destroyed by Hurricane Irma, it is unclear when Barbuda residents will be able to return to their island. UN Women and UNFPA will continue to work with the Government to meet the needs of women and girls of the island displaced by Hurricane Irma and Jose.

Related News
01/04/2020
From where I stand: “I am fearful for smaller countries that have limited resources during COVID-19”
15/08/2018
Crisis update: Restoring dignity and livelihoods after storms in the Caribbean
07/12/2017
From where I stand: Leaving no one behind in Barbuda
15/08/2022
In focus: Women in Afghanistan one year after the Taliban takeover
15/08/2022
Statement: ‘Meticulously constructed policies of inequality’ – Afghanistan one year on
END_OF_DOCUMENT_TOKEN_TO_BE_REPLACED