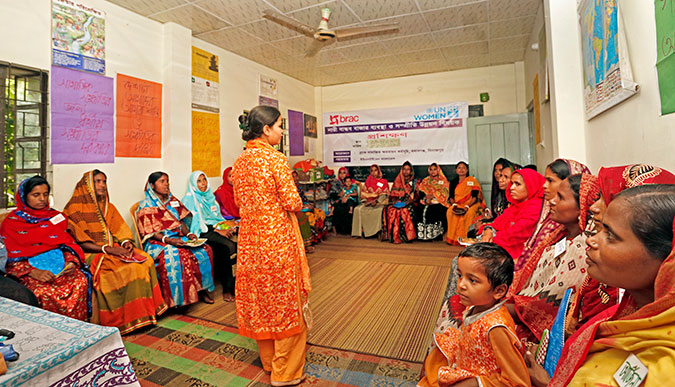 The idea is simple, and makes perfect sense—when women are empowered economically and are part of decision-making in their communities, societies are more cohesive and more peaceful.

It’s Wednesday morning in Dinajpur, a rural district in the northern part of Bangladesh. A group of women sit in a circle sipping tea, their children playing at their feet, as they prepare for a meeting. They are known in the community as “Polli Shomaj Women” [community-based women’s group], and they come from all walks of life—teachers, mothers, students, local elites and members of the local government—convened by a new programme supported by UN Women and BRAC.

They have assembled to discuss how to prevent violent extremism in their own communities. Often the go-to persons for resolving community disputes, together with other members of the community, the women are a critical part of the Dinajpur Community Action group. 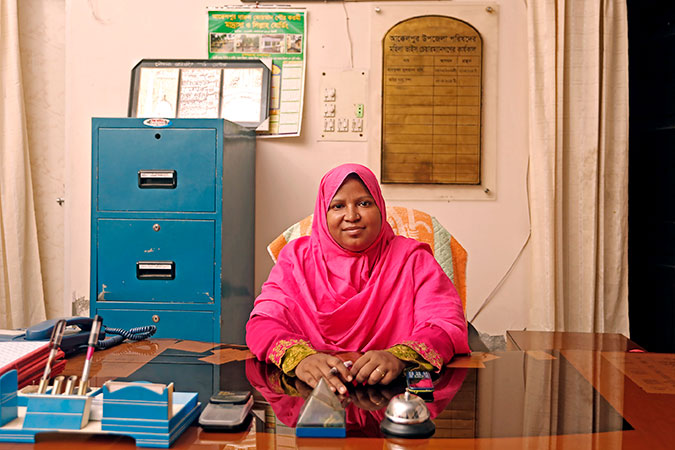 “I am now elected Vice Chairperson, but I was a simple Polli Shomaj Woman, so I understand their concerns and I know I can help the women. My family, specially my husband feels very proud of me for how I’ve been working for other women of our society.”—Asia Khanom Shompa, Vice Chairperson of Women Development Forum

Md. Munjur, a member of the Dinajpur Community Action group says, “A year ago, a young man from the village joined a violent extremist group. The boy was a good student, but he was very religious. When he moved for higher studies, he got involved with some bad people who turned him to extremism, and he was killed in a standoff with the police. The family needed support, so they came to our group. We had never encountered this issue before, so we weren’t sure how to help.”

Recent years have seen a dramatic rise in terrorist activities around the world, including in South and South-East Asia. The 2016 Global Terrorism Index ranks South Asia as the second most affected region in the world. Women and girls are impacted by rising extremism differently than men and boys. They are often the first victims of violent attacks; their rights and mobility, as well as economic capacities, are compromised even more than their male counterparts.

But women also play a vital role in preventing the spread of extremist ideology and activity. As community leaders, professionals, and as mothers, wives, sisters and daughters in family settings, they shape the values of their community members.

Hosne Ara Baby from Nawabgonj in Dinajpur district has been involved with the Community Action Group for the last two years. “We thought that the community should come together and help people solve problems. So BRAC helped us form this group,” she says. 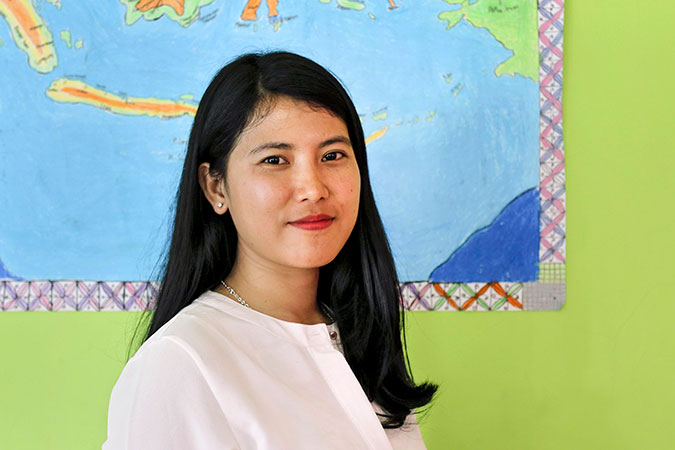 Meet Meyli Aryani, a small business owner in Pondok Cina village in West Java province of Indonesia. "My mother is Christian, my stepfather is Muslim, I am Christian, and my brother is Muslim," she said. "The village is an example of tolerance and mutual respect. Muslims join Christian for Christmas. During the Chinese New Year, we go to our Confucian neighbor's house. We all communicate well with each other. It is the key to having a peaceful village."

The peace village is part of UN Women's Empowered Women, Peaceful Communities programme, which works in Indonesia and Bangladesh to economically empower women through small business workshops and loans, and to support peaceful solutions to growing intolerance and violent extremism. The Wahid Foundation, UN Women’s partner in Indonesia, facilitates women's microfinance groups that meet weekly to learn about financial management and how to develop their small businesses. UN Women provides the groups with capital for loans. Through these groups, women of diverse religious and social backgrounds, like Aryani, learn to support each other. Read the full story»

Tying women’s economic empowerment to preventing violent extremism is a new idea for many, but to Baby, it’s common sense. She explains: “Women can play very strong roles in ensuring social cohesion, but first they need to be aware of their rights and to be included in the local economy. That will help them get involved with a wider network of people, improve their level of understanding regarding the society and the people they live around, and most importantly, this will increase their confidence, which will make them feel empowered.”

After receiving trainings through the programme, Baby worked with her group to lobby schools to include information in their curriculum on how to identify and prevent violent extremism. “We mothers are now more aware because we have attended the trainings. Women can work together and raise awareness within the communities.”

Talking about the programme, Shoko Ishikawa, UN Women Bangladesh Country Representative says: “We want to empower women in the community with the knowledge and skills to address instances of violent extremism and to see the warning signs before it happens. We also want to support women to have a greater say in their community when things are going wrong, and economically empowered women are better able to claim that space.”

Mosammat Kamrunnahar, one of the Polli Shomaj Women in Dinajpur is a case in point. She has developed her business skills and increased her understanding about the importance of cultivating a spirit of peace and tolerance in her community.

“Mothers can play a strong role in ensuring cohesion within their families as well as in the society,” she elaborates that mothers often know more about what their family members are doing and maintain friendly relations with other in a community. “So, they are well placed to help themselves and also others to avoid any possible extremism.” While preventing violent extremism takes awareness and effort from all parts of the society, the programme is among the first ones to specifically target and empower women. 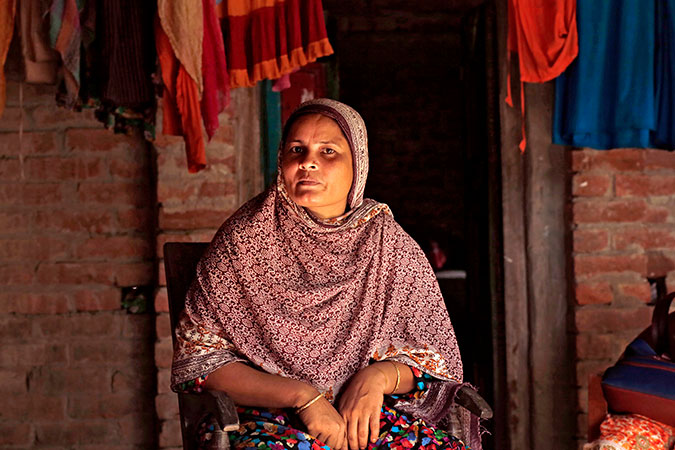 In less than a year since the programme started, the communities are already experiencing a difference: “Before, no one knew much about violent extremism or considered the actions they could take to prevent it in their communities,” says Shuvashis Chandra Mahanta, Manager-Capacity Building and Communication, BRAC. “Now we see that women are very outspoken about this issue, and they are talking to others about what they can do to prevent radicalization.”

“Once you give women their voice, there's no stopping them” 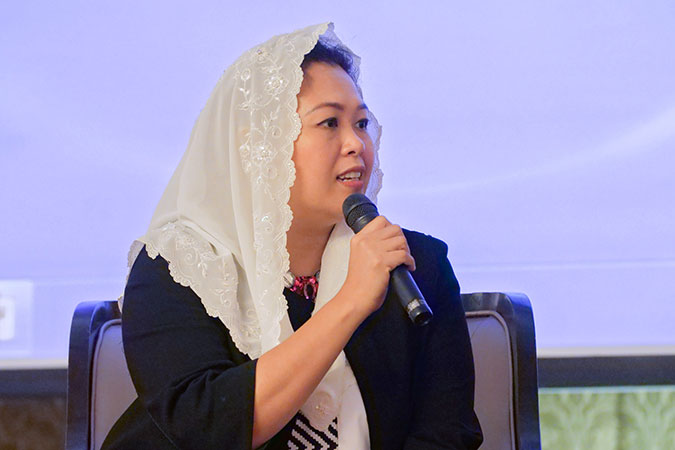 In 2017, as grassroots activists and experts from more than 20 countries in South and Southeast Asia convened in Bangkok to discuss “Engaging Communities in Approaches to Countering Violent Extremism and Incitement in Asia”, Ms. Wahid spoke about why engaging women at the grassroots level helps to prevent violent extremism in Indonesia.

“I wanted to make sure that communities in Indonesia stay tolerant and are not swayed by the radical groups' agendas. Our community tries to promote tolerance and be a vanguard of peace and tolerant views in Indonesia. We come from a tradition of tolerance. At the same time, the members of the community in Indonesia are usually very poor. They come from traditional communities, without access to good education or economic empowerment agendas.

Empowering women is part of that struggle, part of reclaiming that space. Once you give women their voice, there's no stopping them.”

Awareness and dialogue are at the heart of resolving and preventing conflicts. The Bangladesh programme is part of UN Women’s regional programme on preventing violent extremism in the Asia and the Pacific, which takes a four-track approach: working with governments to ensure that national and regional counterterrorism policies and strategies are informed by women’s experiences; developing research on the gender implications of extremism; expanding women’s economic resilience; and increasing their leadership and participation in preventing the spread of extremism within their communities. The programme in Bangladesh is expected to enhance the capacity, leadership, livelihood skills and resources of 1,200 Polli Shomaj women from all six districts.

Related News
28/11/2012
Setting the scene: using audio-visual tools to train peacekeepers to respond
07/12/2020
Viet Nam and United Nations convenes global conference to accelerate action on global commitments on women, peace and security
01/12/2020
Hand over the mic to: Minara
21/10/2020
In the words of Miriam Coronel-Ferrer: “I became the first female negotiator to sign a final peace accord with a rebel group”
03/09/2020
Interview with Motegi Toshimitsu, Japanese Minister for Foreign Affairs
END_OF_DOCUMENT_TOKEN_TO_BE_REPLACED