In the words of Faidah Suleiman: “Through my job I’m making changes in my family and in the society” 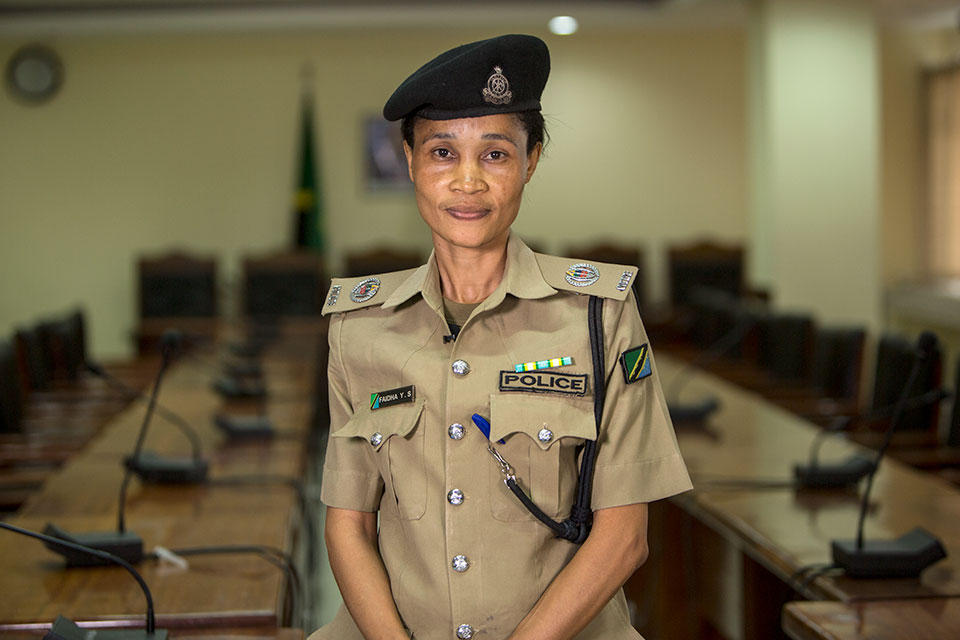 Faidah Suleiman is the Superintendent of Police, Gender and Children Desk in Tanzania. With 20 years of police experience, she has been part of the Gender Desk since it was established in 2009. In 2014, UN Women, with support from the Governments of Norway and Sweden, partnered with the Gender and Children Desks to improve the quality of services provided. Today, there are 417 Gender and Children Desks nation-wide, which received more than 31,000 reported cases of violence against women and girls in 2017. Suleiman is also a member of Tanzania’s Female Police Network, an association of female police officers formed to advance the interests of its members and their community.

Sometimes people have a negative attitude about [female] police officers, but I always liked police officers. Even before I knew there will be a Gender Desk.  My father died when my mother was pregnant. Everything was taken by our aunty and other relatives on our father’s side, and gender-based violence was always present, so I was eager to [protect] the rights of my family. The only way I thought I could do this was through the police and by learning the law. That’s why I became a police officer and I’m a lawyer too.

When I joined the police force there were only a few women. In a group of about 1,500, we were only 97 women police officers. Nowadays, you can see there are 200 or 500.  Since we established the Tanzania Female Police Network, we managed to have a woman commissioner for the first time in 2015, Commander Alice Mapunda.

Being a police officer and being a gender specialist enabled me to help not only my mother, but others in my family too. When my uncle passed away, there was again scrambling about items in his home. I stood up and said no, these are for his wife and kids and nobody should take it. The [deceased] husband was my blood relative, but I was fighting for the wife.

I’m proud that through my job I’m making changes in my family and in the society.

In the Gender Desk, we take criminal cases. We are dealing with gender-based violence and violence against children. The most common cases I see are rape. Our mandate is prosecution of criminal cases, but we don’t leave those with civil cases alone. We listen to them, we refer them to the right person and we call them. Sometimes we escort them to the right service and follow up on how their cases are going.

We are working on a “Protocol” with UN Women that will provide step-by-step guidance and make it easier to work with partners in other sectors, such as social affairs, health and education, on cases of gender-based violence. It is going to be signed by all the Permanent Secretaries of those Ministries, so we have a firm commitment. We expect to have it ready later this year, or by early next year latest.

The Female Police Network also visits schools around the country to teach children what to do [in case of violence], what is a crime and what is not.

Related News
10/03/2021
This is what leadership looks like: Meet Mzuri Issa, breaking down social barriers to women’s leadership in Tanzania, using the media
27/05/2021
UN Women Executive Director visits Mozambique, calls for women’s leadership in peacebuilding and ongoing humanitarian efforts, and bold commitments for the Generation Equality Forum
05/05/2021
From where I stand: “The more Roma women are visible, the more impact they have on society as a whole”
10/03/2021
This is what leadership looks like: Bernadette Gomina, a pioneering parliamentarian in Central African Republic
13/07/2020
From where I stand: “I want the views of older persons included in the planning of COVID-19 recovery programmes for my community”
END_OF_DOCUMENT_TOKEN_TO_BE_REPLACED