This is what leadership looks like: Meet Mzuri Issa, breaking down social barriers to women’s leadership in Tanzania, using the media

Through her work at the Tanzania Media Women’s Association in Zanzibar, Mzuri Issa is at the forefront of pushing for legal reforms and changing policies and attitudes that impede women’s access to leadership and decision-making. Her tough childhood experiences motivate her to advocate for the rights of women and girls, using the media. 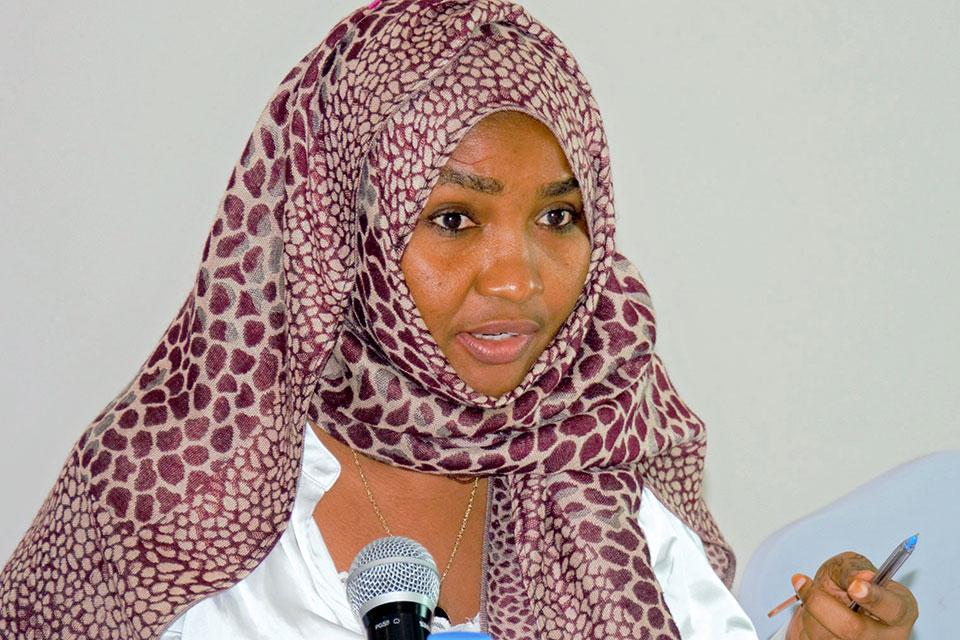 “Growing up, I faced a lot of rejection,” says Mzuri Issa, head of the Tanzania Media Women’s Association in Zanzibar (TAMWA-Zanzibar). “My mother didn’t have the means to raise me, and I spent most of my childhood moving from one home to another.”

“I became an adult very fast. At the age of 11, I was working at a fast-food kiosk just so I had something to eat every day. I witnessed countless forms of discrimination and abuse against women, including my own mother,” she adds.

Issa says that she learned valuable lessons about life from those early years, which motivated her to complete her education and establish the Zanzibar branch of TAMWA, in 2004.

Issa had just begun her career as a journalist in the early 90s, when she learned about a law that discriminated against women and girls who got pregnant out of wedlock. The penalty could include a prison sentence for the pregnant woman. She reported on the issue for years, and worked alongside media partners and activists, calling for the review of the law. The law was finally changed in 2005.

With funding and technical support from UN Women, TAMWA-Zanzibar has been working with religious leaders and grass-roots communities since 2010, to change cultural norms, attitudes and practices that create barriers to women’s empowerment – including their access to leadership and decision-making positions. For instance, women in Zanzibar are more likely to be unemployed and earn lower incomes, and patriarchal systems entrenched in Zanzibar’s culture constitute barriers to accessing decision-making roles within their homes, in their communities and within the institutions that serve as gatekeepers, such as political parties.

“Unfortunately, many still believe women cannot and should not be leaders, particularly in politics, and they base these beliefs on religion. But the leadership of women is evident in both the Qur’an and the Bible,” says Issa.

Issa is also at the forefront of pushing for legal reforms that will ensure women compete effectively for leadership positions on an equal standing with men, and for perpetrators of violence against women to be held accountable. She is specifically advocating to increase rape prison sentences to 30 years.

“I work in advocacy to change perceptions that lead to discrimination against women and [to uplift] women’s status in society,” she says. “My work is really fulfilling.”

In 2020, the organization worked with a team of 46 male change agents and over 70 religious leaders, to promote women’s leadership by raising public awareness. About 590 community members within eight districts of the Zanzibar islands of Unguja and Pemba were reached.

TAMWA also works closely with the mainstream media, sensitizing them on gender-responsive reporting, ensuring women are key news sources, well-represented in diverse roles, and jointly producing content, instead of being portrayed only as victims. In 2020, TAMWA trained over 50 journalists, and provided longer-term mentoring to ensure that they produced content promoting women’s leadership. As a result, over 263 news stories and features promoted women’s leadership and meaningful participation in decision-making in the period leading up to, and immediately after, the general elections in October last year.

“I work in advocacy to change perceptions that lead to discrimination against women and [to uplift] women’s status in society.”

Because of TAMWA-Zanzibar’s work, Issa believes that more women were visible in leadership roles, thus inspiring women to run for elections. “A total of 162 women won nominations within their parties and ran for election in the Zanzibar House of Representatives (ZHoR) and councils,” says Issa. “Of the 435 women who expressed interest to contest at various levels, five women ran for the presidency, a first for Zanzibar.”

Women currently make up 40.8 per cent of the House of Representatives, a 3 per cent increase from the previous five-year term, and almost double the average proportion of women in parliament in Sub-Saharan Africa (24.4 per cent).

To make even greater progress, Issa says increasing the number of women working within the media is critical. “Because the media serves as a mirror to society, we need more women working in media houses to accurately represent women’s lived experiences.”

“Better representation will help stop the perpetuation of negative stereotypes, and give women the voice and platform they deserve.”

Since 2014, the programme has been working to address challenges that women face in accessing leadership and decision-making roles across Tanzania, by identifying the gaps in legal and policy frameworks, building the capacity of aspiring and current women leaders, and supporting institutional change to create enabling environment for women to take up decision-making roles.

This year, UN Women plans to continue working with TAMWA-Zanzibar to expand its reach to other districts, and focus on engaging male allies and building leadership skills of young women, including those with disabilities.

Related News
13/07/2020
From where I stand: “I want the views of older persons included in the planning of COVID-19 recovery programmes for my community”
12/02/2019
Take five with Tchonko Becky Bissong: “With my voice, I can impact the masses”
18/10/2018
In the words of Faidah Suleiman: “Through my job I’m making changes in my family and in the society”
10/03/2021
This is what leadership looks like: Bernadette Gomina, a pioneering parliamentarian in Central African Republic
09/03/2021
This is what leadership looks like: Rewriting Kenya’s laws with Millie Odhiambo
END_OF_DOCUMENT_TOKEN_TO_BE_REPLACED