This is what leadership looks like: Bernadette Gomina, a pioneering parliamentarian in Central African Republic

Bernadette Gomina is a Member of Parliament for the administrative division of Bayanga, in the south of the Central African Republic (CAR) and one of two women elected in the first round of the 2020–2021 legislative elections in the country. She details the challenges that women leaders face and how the Forum of Women Parliamentarians has helped spark change. 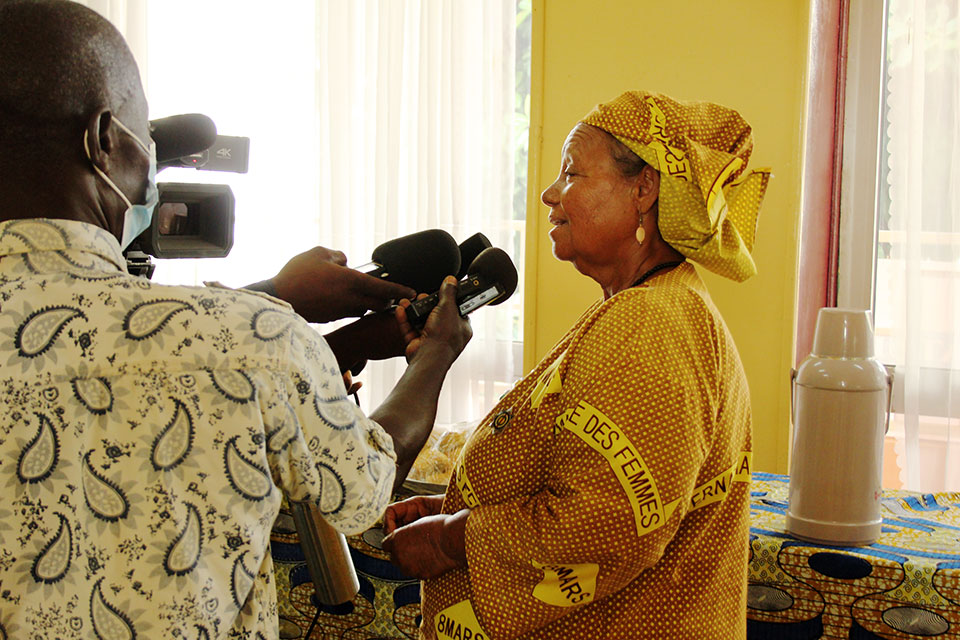 Bernadette Gomina is one of two women elected in the first round of legislative elections in the Central African Republic this year. Photo: UN Women/Novella Nikwigize

“I can tell you, perseverance pays,” says Bernadette Gomina, who ran unsuccessfully for the legislature in 2005 and 2010. She was elected in 2015 and reelected in 2020. “[Women parliamentarians] face issues at many levels: [lack of] finances, discriminatory behaviours and mindsets, but us women … we have our part to play; we must change our mindsets and get to work, together, to change this situation.”

The Central African Republic’s first-round presidential and parliamentary elections on 27 December 2020 were mired by violence and attacks by rebel groups. In the provinces, many candidates – women in particular – were threatened, robbed and even physically assaulted. In response to complaints by women candidates, UN Women and the United Nations Police established a hotline to receive reports of violence against women. More women are expected to run for election in the second round.

“I didn’t get discouraged by all the negative experiences,” says Gomina. “My [constituents] continued to encourage me, giving me the strength to continue campaigning.”

“When I first got elected, I found out that the schools in my locality had no teachers or equipment. Of course, each locality has a small budget, but it was managed by local authorities who were not responsive. I had to respond to these challenges on my own, through donations and hiring high school teachers that I paid from own my salary… because I couldn’t stand to see children in my locality lack a proper education.”

A former midwife, Gomina submitted several project proposals to international organizations, and built a Women’s Centre in Bayanga with MINUSCA’s support. She also championed “Open Days” at the parliament, when girls from high schools interact with women parliamentarians, and job-shadowing initiatives to encourage more young women to get into politics.

Since 2015, UN Women has supported women’s political participation by establishing the Forum of Women Parliamentarians, in collaboration with the United Nations Development Programme (UNDP), and by building the capacities of women parliamentarians and community leaders alike.

“The Forum has been an important [impartial] tool to advocate for women’s rights,” says Gomina, its Vice-President during the past legislature. “[It] is also a great platform for experience-sharing. When other parliamentarians talked about their initiatives, they gave me ideas as well. For example, I got inspired to bring solar-powered streetlamps to our villages following the testimony of another woman parliamentarian.”

“When I first got elected, I found out that the schools in my locality had no teachers or equipment...I had to respond to these challenges on my own, through donations and hiring high school teachers that I paid from own my salary.”

In a country where women comprise less than 15 per cent of Cabinet and 8.5 per cent of Parliament (in the outgoing government), UN Women has focused on strengthening legal frameworks.

Between 2015 and 2020, with support from the Peacebuilding Fund, the Governments of Canada and Sweden and UNDP, and through the Ministry of Women, UN Women supported the revision and adoption of gender-sensitive laws, including the 2016 Parity Law, which provides for a 35 per cent quota for women in all decision-making bodies.

However, implementation of the parity law remains a challenge because of lack of enforcement. Although parties are required to have a minimum number of women on their lists, they can provide a simple explanation to the Constitutional Court why they haven’t met the quota to get their party validated.

“When it came to the Parity Law and other laws on gender, [Forum members] … all agreed to convince fellow MPs and members of our respective parties to vote in favour. … It is because we were there, and we worked together, that today Central African Republic has its Parity Law.”

Leading up to the 2020–2021 elections, UN Women, in partnership with UNDP, MINUSCA and the European Union, also advocated for and supported a gender audit and gender strategy for the National Elections Authority and revisions to the 2019 Electoral Code. As a result, women represented 38 per cent of local electoral authorities, compared to 11 per cent during the 2015 elections.

In addition, 40 per cent of electoral trainers were women, recruited and trained with the support of UN Women. Moreover, 850 community volunteers have been engaged in outreach to ensure women’s participation at all stages of the electoral process, while 135 political coaches were trained to provide one-on-one coaching to over 540 potential women candidates.

With the support of UN Women and UN partners, women’s civil society organizations have also played a critical role in increasing women’s participation in the political space, says Gypsiane Aguene Roche, Gender Focal Point with the National Elections Authority. “Through their advocacy, we are seeing more women emerging in decision-making positions and young women can look up to female role models in politics.”

Related News
24/02/2020
My Take, Your Take: Ushering in a new generation of women leaders in Central African Republic
10/05/2019
Guinea adopts Law on Parity, securing equal representation of women on electoral lists
12/02/2019
Take five with Tchonko Becky Bissong: “With my voice, I can impact the masses”
06/02/2019
From where I stand: “Disability will not stop me from achieving my dreams.”
27/06/2014
Women in power and decision-making: Strengthening voices for democracy
END_OF_DOCUMENT_TOKEN_TO_BE_REPLACED