From where I stand: “Disability will not stop me from achieving my dreams.”

The status of women’s political participation in Nigeria is low, with less than 6 per cent of political positions being held by women. Lois Auta, 38-year-old polio survivor from Abuja, is all about changing the status quo. Auta is a candidate in the upcoming elections for the House of Representatives and received capacity-building training from UN Women. 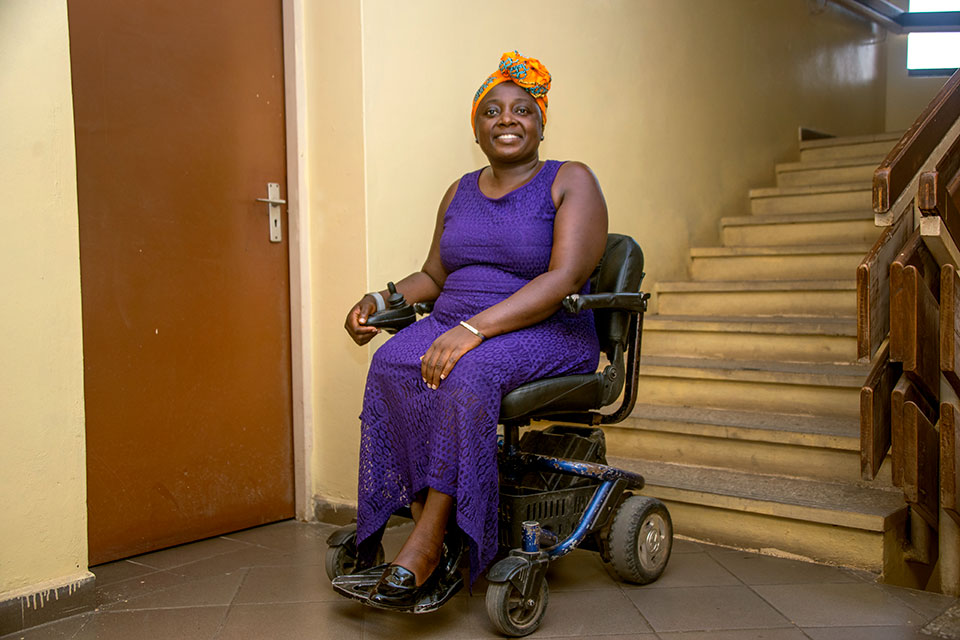 Lois Auta wants a seat in the House of Representatives so she can advocate for inclusive legislation. Photo: UN Women/Nathan Ali

I was affected by polio when I was two years old, but I see my disability as an opportunity to change the world. Disability will not stop me from achieving my dreams.

In April 2018, I decided to run for office and informed my party. After several consultations with traditional leaders, students and community members, I received enormous support and went ahead with my plans… I was nominated for my party to run for the House of Representatives because I was educated and qualified.

I see this as a huge opportunity because I have become a reference point for people with disability in elections. It’s a stepping stone to my political journey. My family was also happy because being a woman with a disability, I’m changing the status quo for women.

My main challenge is inaccessibility to meeting venues because I’m a wheelchair user. Some villages are harder to reach for me because sometimes you have to cross rivers. I also face challenges in funding, while most male candidates have sponsors.

I am an advocate of inclusive legislation. I am glad that the Persons with Disabilities Bill has been recently signed, which means we will have better access to infrastructure, healthcare and transportation. If I win the elections, I will sponsor bills that provide an enabling environment for persons with disabilities, especially in the area of education. I will also ensure there is a 10 per cent [reserved quotas] in every organization for graduates with a disability."

Polio survivor Lois Auta is a 38-year-old advocate for the rights of people with disabilities and a candidate for a seat in the House of Representatives (from Abuja Municipal Area Council, Bwari Ward, Federal Capital Territory) in Nigeria. An advocate for inclusive legislation, she has taken part in UN Women’s capacity-building training for young women under a regional programme to support Women’s Political Empowerment in four countries of West Africa, funded by the Government of Canada.

Related News
10/03/2021
This is what leadership looks like: Bernadette Gomina, a pioneering parliamentarian in Central African Republic
06/02/2019
It’s election season in Nigeria, but where are the women?
09/04/2018
In the words of Blessing Ihauku Daru: “Women need to be in the corridors of power and politics”
03/10/2016
Strong steps forward for the African continent as Nigeria and Liberia undertake new legislation
09/10/2015
Women’s Situation Rooms boost peaceful voting in Africa
END_OF_DOCUMENT_TOKEN_TO_BE_REPLACED