Take five: “We must support women and girls, especially survivors, to lead change” 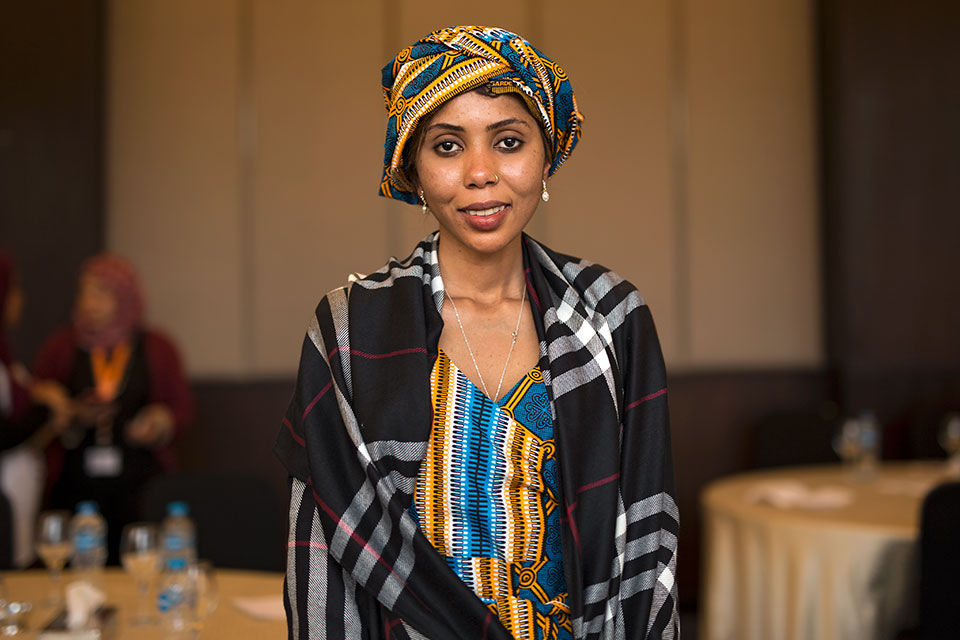 Jaha Dukureh, Regional UN Women Ambassador for Africa, is a survivor of female genital mutilation (FGM) and was forced into child marriage at age 15. Recently, she participated at the “North Africa Sub-Regional Dialogue on Child Marriage and FGM/C”, organized by UN Women Regional Office for Arab States and North Africa in November 2018. The dialogue targeted faith-based leaders and youth and its recommendations—consolidated with those of the regional offices in East and Southern Africa and West and Central Africa targeting traditional leaders—will be jointly presented by UN Women at the High-Level Meeting of Traditional Leaders during the African Union Heads of State Summit in January 2019. Globally, of the over 200 million girls and women who have undergone FGM, and the 650 million child brides alive today, many are migrants and refugees. In this interview, Ms. Dukureh speaks to UN Women about how best to address the particular vulnerabilities faced by migrant women and girls.

You underwent female genital mutilation and child marriage. How did these experiences affect you and how does it impact other girls?

I came to New York city on Christmas day when I was 15 to marry a man I had never met. Marrying so young is the most difficult thing any girl can go through. When you force a girl to marry you’ve given a man the right to rape her every single day.

Both FGM and child marriage are ultimately forms of discrimination and violence against women and girls, framed by a culture of gender inequality. I underwent FGM as a baby and didn’t realize what that meant until I was 15.

There are four types of FGM; I went through “Type 3”, which is the total removal of the clitoris, and the labia and the vagina are stitched together with only a small hole to urinate and menstruate. I realized that my marriage could not be consummated till I was deinfibrilated.

FGM and child marriage show that women and girls do not control their bodies, choices and lives. And this has serious socio-economic, physical, emotional, sexual and health consequences, including death. We must end these practices and address the gender discrimination and inequality that condone them.

SDG 5 focuses on gender equality and empowering all women and girls, with a focus on addressing the most vulnerable. Are migrant and refugee women and girls among the more vulnerable to practices such as FGM and child marriage? What are the additional drivers of these practices in their milieus?

FGM and child marriage are means of controlling women’s and girl’s bodies, sexualities and futures, and are invested with notions of purity, protection of female purity, desirability as wives, and cloaked in religiosity. Migrant women and girls who are moving because of their circumstances or refugee women and girls whom I have worked with, traumatized and fleeing war-ravaged countries to new countries with new cultures, are more vulnerable. There are additional pressures related to desperate socio-economic conditions, lack of regular legal status, safety and security concerns in alien contexts—all of which increase their vulnerability. Protection from sexual violence, the premium on sexual purity, the need for one less mouth to feed, cash and kind received at marriage, and possibilities of obtaining legitimate legal status by marrying a host country national are concrete factors driving FGM and child marriage among migrant and refugee women and girls.

Moreover, these communities carry their customs and traditions with them when they move to other countries. So FGM and child marriages are still prevalent in migrant communities, even in parts of the world that may not have known them before.

What are the religious justifications for FGM and child marriage and how can we counter them?

Islam prohibits mutilating, piercing or tattooing the body. FGM has no Koranic justification. It is Sunnah (the body of traditional, social and legal customs and practices of the Islamic community, based on the verbally transmitted record of the teachings, deeds and sayings.) None of the Prophet’s wives or daughters underwent FGM. So, there are no Hadiths on FGM.

But men control religion and people tend to accept general religious justifications without probing and questioning. Child marriage is more complex, but we have data and evidence, we can highlight the adverse health impacts of child marriage and laws that ban the practice, when there are conflicting religious arguments.

What strategies would you suggest to address the particular vulnerabilities of migrant and refugee women and girls to FGM and child marriage?

FGM and child marriage are often “coping mechanisms” for families, migrant women and girls in hardship conditions. These particular situations of vulnerability must be addressed. Informing migrant and refugee women and girls about the myths and impacts of FGM and child marriage is very important, and this information should be part of safe migration services and refugee welcome kits.

Equally important is to ensure education and viable livelihood opportunities for them and the provision of culturally sensitive, accessible services in host countries, including health and counselling services that do not re-traumatize them.

Help communities realize that women and girls are not just victims of conflict, displacement and other dire situations, but key to conflict prevention, resolution and development in their countries of origin and residence.

We must support women and girls, especially survivors, to lead change and be role models. When a survivor speaks to her own people, it touches a chord. Her experience cannot be dismissed as a ‘western intervention to save African people’. I screamed out against FGM and child marriage, wrote blogs, threatened to call law enforcement if I could not leave my husband, established an NGO to combat these practices and petitioned the Obama administration to investigate the profile of FGM in the United States of America. Subsequently, I contributed to the Summit to End FGM in 2016 at the United States Institute of Peace as well as to the legislation banning FGM in Gambia, my birth country. I want young girls to look at me, see that we share much in common and that their future is bigger than they imagine.

Change cannot come from talking to the converted in conference rooms. We must work with religious and traditional leaders, communities of men, boys and parents who think differently. We must listen to and understand their rationale and belief systems respectfully, and ensure that their privacy and dignity is maintained. We must avert judgementalism, use alternate religious interpretations and cite scientific evidence on adverse socio-economic and health impacts of FGM and child marriage. This approach would create an enabling environment for dialogues, and breakthroughs in social norms, mindset and behaviour change.

I want to see the day when no parent makes a decision that will change and limit their daughters’ lives.

Related News
12/12/2022
In the words of Jaha Dukureh: “As long as I am alive, I will wake up every single day and scream to the world that FGM is wrong and child marriage is not different from rape.”
11/12/2019
Take five: Morocco’s Anti-Trafficking Law and its link to migration
10/10/2016
Press release: UN Women Goodwill Ambassador Emma Watson shines spotlight on need to end child marriages
03/05/2016
A snapshot of UN Women’s work in response to the crisis in Syria
11/11/2015
UN Women and WFP unveil expansion of ‘Oases’ safe spaces in Za'atari refugee camp
END_OF_DOCUMENT_TOKEN_TO_BE_REPLACED