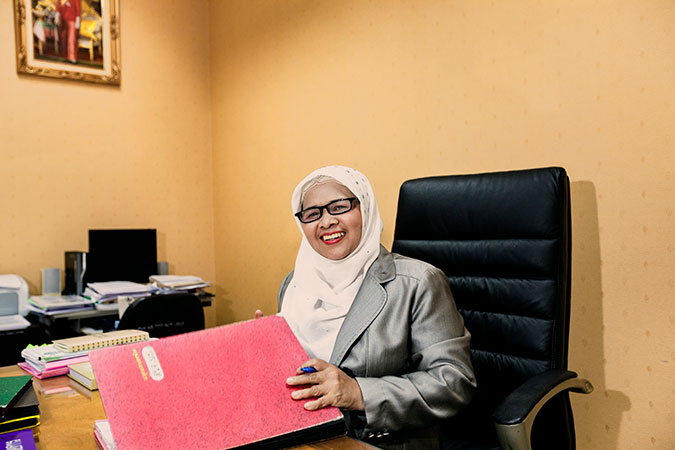 “I finally broke the glass ceiling,” said Patimoh Sadiyamu, the first Muslim woman to hold the position of vice provincial governor in Thailand’s southern border provinces of Narathiwat, home to over 2 million residents, and the scene of escalating violence.

A native of Yala, one of the three provinces in the area, Sadiyamu, now 52, is not new to politics, having spent almost three decades in the Interior Ministry. But coming from an impoverished rural area where Muslim women hardly stepped outside their homes, and lacked political know-how and access to politics, Sadiyamu’s journey to political leadership wasn’t easy.

“Education and mentorship of my parents lifted me out of poverty,” said Sadiyamu. “Education gave me a chance to learn to live with diversity of beliefs and religions in our rural communities.”

She firmly believes that “Women too have a political responsibility and an important role to play in public life … they are agents of peace when they are economically, socially and politically empowered.”

This is also the premise of UN Women’s programme, “Empowering women leaders and young people to build resilient, cohesive and peaceful communities in the southern border provinces of Thailand”, funded by private sector partners like Thai Airways International and Central Retail Corporation. The programme is active in the three southern border provinces – Pattani, Yala and Narathiwat. 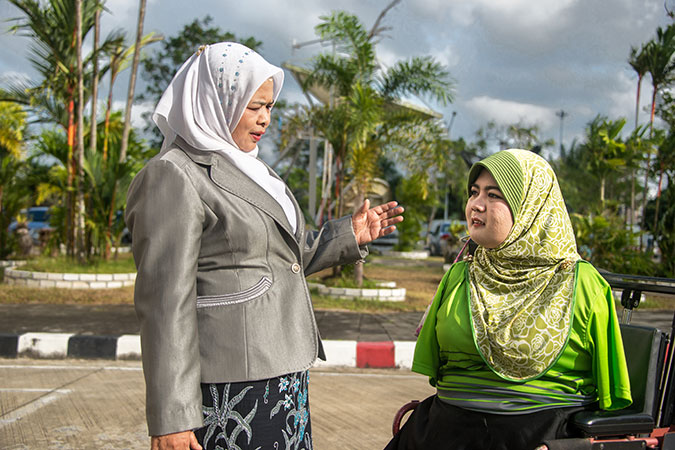 “It is true, that women are underrepresented in most facets of the political process,” continued Sadiyamu, pointing to social-cultural barriers, lack of training and resources for women's political organizing, and their precarious economic challenges. “Women tend to take care of their homes and family, the culture forbids them from running for political offices,” she added.

Sadiyamu’s strategic collaboration with rural women’s groups became her source of support and helped her run her office. Voices of rural women may have been forgotten or neglected in the past peace talks, but Sadiyamu has made it her mission to empower them and to work with rural youth through various development projects, such as youth radio programmes, cottage industry development and community market place where women and youth can earn income.

Yala and Narathiwat, along with the neighbouring province of Pattani and four districts of Songkhla province just to the north, have been hotbeds of violent conflicts driven by radical extremism for decades. Successive peace talks have failed to resolve the conflict.

While efforts are underway to initiate peace talks again, there’s little relief for the people who live in the area. There have been bombing and other forms of attacks targeting innocent people in public spaces, such as markets and sidewalks, where more women and children are present.

Not only are women direct victims of such violence, they severely lack autonomy and economic opportunities because of restrictive social and cultural norms. The chronic insecurity further compounds their vulnerabilities. Sadiyamu believes that women’s participation in the peace process is imperative at the moment.

“Even when we saw a single woman in a group of peace negotiators, that was progress from the usual absence of any women,” said the vice governor. “The government will benefit by engaging women in the peace process and by creating safe spaces where they are protected and empowered during crisis situations,” she added.

Related News
21/07/2019
Inclusive peace in Afghanistan means ‘women at the centre’, urges UN deputy chief in Kabul
21/10/2020
In the words of Miriam Coronel-Ferrer: “I became the first female negotiator to sign a final peace accord with a rebel group”
25/05/2018
In the words of Major Cleo Bigwood: “Many of us are working tirelessly to make things better for you.”
23/11/2015
Libyan women forge agenda for peace
05/11/2013
In Myanmar, efforts to bring women to the centre of peacebuilding
END_OF_DOCUMENT_TOKEN_TO_BE_REPLACED