In the words of Miriam Coronel-Ferrer: “I became the first female negotiator to sign a final peace accord with a rebel group” 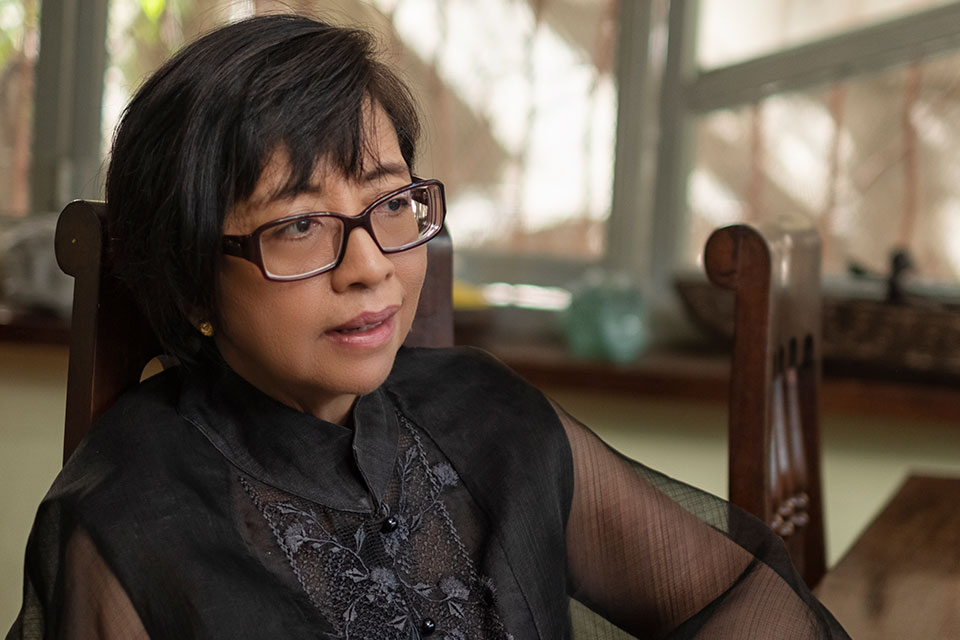 Miriam Coronel-Ferrer made history as the first female chief negotiator in the world to sign a final peace accord with a rebel group, the Moro Islamic Liberation Front in the Philippines in 2014. Today, she teaches political science at the University of the Philippines and works on mediation with the United Nations. UN Women spoke with Professor Coronel-Ferrer on the occasion of the 20th anniversary of UN Security Council resolution 1325, which continues to shape the agenda for women, peace and security, to include women and gender analysis in all aspects of conflict prevention, peace and reconstruction. Critical to the agenda, are women peace leaders gaining and exercising decision-making power.

When I was at the university in the late 1970s, the country was under martial law imposed by the Government of Ferdinand Marcos. I started to become politically active and after graduation, I worked in the underground activist movement. It was a dangerous time. I had friends who were killed; other activists were raped, tortured or detained.

In 1986, Marcos was forced to leave the country after people took to the streets, in what became known as the People Power Revolution. After that, all of my work focused on whether the democratic space created the potential for non-violent solutions to conflict.

The peace movement that emerged after the People Power Revolution was mostly led by women. We all came together across many different organizations and ideological positions. All of my best work, including working on the National Action Plan for the Philippines Government to implement the Security Council resolution 1325, the landmark resolution on women, peace and security , has involved coming together with women from many walks of life and working to pursue a common goal.

I joined academia and concentrated on peacebuilding and the peace process. This was how I eventually came to be asked by President Simeon Bengino Aquino to join the Government of the Philippine’s peace panel in 2010. Our aim was to negotiate and sign a peace agreement with the Moro Islamic Liberation Front, an armed group in Mindanao in the south of the country, which wanted to form an autonomous region of the Moro people.

After four years of hard work, I became the first female negotiator to sign a final peace accord with a rebel group.

It was also a landmark moment for women in the Philippines, because three of the five signatories on the Government’s side of the peace deal were women. [That experience] made me determined to work towards ensuring more women are participating and leading international peace processes. On the ground many women are working to advance peace and security agendas, but we need to be recognized and visible at the highest levels as well.

This has become all the more important in recent years as we have seen the return of authoritarianism and a pushback against women’s rights and the peace agenda. Sexism is everywhere in the public discourse, from social media to presidential palaces. I am concerned about how the next generation will look at this new wave of leaders and see how women tolerated them and men emulated them. This is disturbing and dangerous.

I feel that I was born under a lucky star because I have a lot of support from my husband and my family. Many women don’t have this kind of safe, supportive space, and struggle to be free from domestic violence, or the shackles of household work and lack economic freedom. It is for them that I don’t give up the vision of a future defined by peace and not by conflict and division.”

Related News
14/10/2015
Turn words into action involving women for lasting peace
21/07/2019
Inclusive peace in Afghanistan means ‘women at the centre’, urges UN deputy chief in Kabul
27/09/2018
Coverage: Fulfilling the promise of women’s meaningful participation in peace processes
13/10/2015
The most underutilized tool we have for successfully building peace is the meaningful inclusion of women – Executive Director
05/11/2013
In Myanmar, efforts to bring women to the centre of peacebuilding
END_OF_DOCUMENT_TOKEN_TO_BE_REPLACED