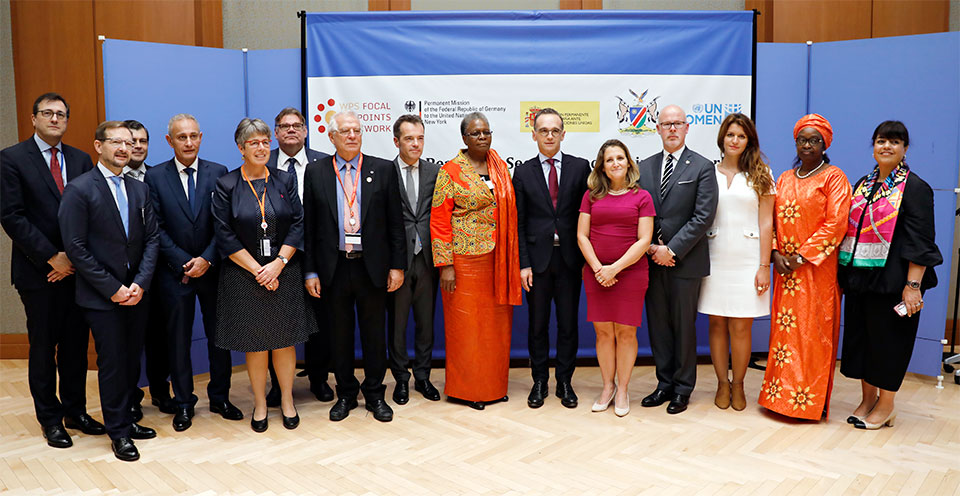 Participants of the Ministerial interactive discussion at the United Nations General Assembly side event of the Women, Peace and Security Focal Points Network on 26 September in New York. Photo: UN Women/Ryan Brown

“Women’s participation is not just a matter of gender equality; it’s a matter of peace. There’s no peace without women,” said Heiko Maas, Federal Minister for Foreign Affairs, Germany, in his welcoming remarks at the side event of the Women, Peace and Security Focal Points Network titled, “The Security Council and Women, Peace and Security: Fostering Practical Action” on 26 September in New York.

Taking place on the margins of the 73rd UN General Assembly (UNGA 73), the event, organized by the Permanent Missions of Germany, Spain and Namibia to the United Nations, in partnership with UN Women, convened ministers, UN officials and civil society organizations to discuss progress made in the women, peace and security (WPS) agenda and ways to increase women’s meaningful participation in peace processes, as well as protect them from conflict-related sexual and gender-based violence, especially through the WPS Focal Points Network. 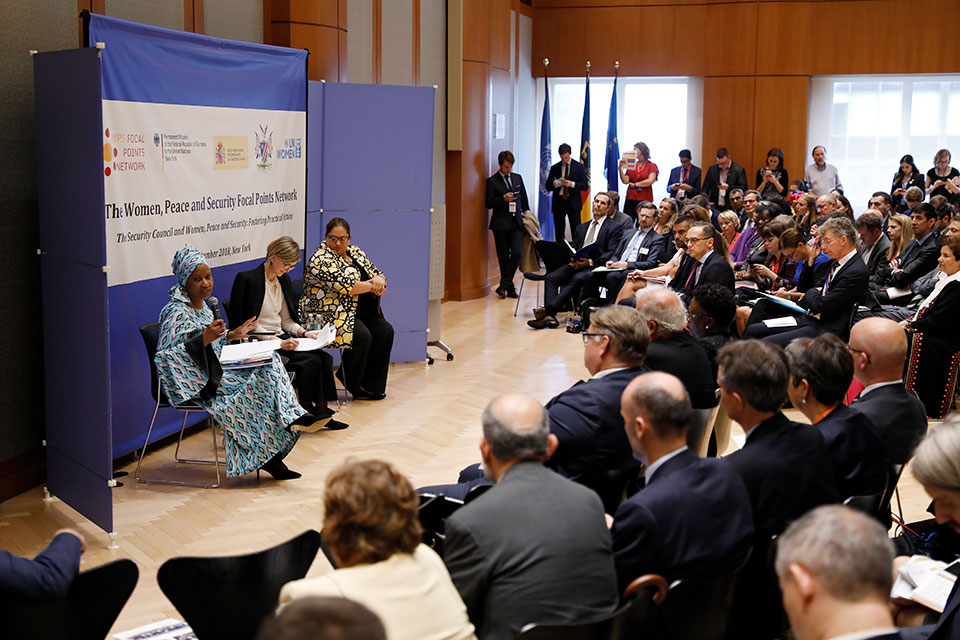 While participants unequivocally agreed that substantial progress has been made since the UN Security Council adopted the resolution (UNSCr) 1325 in 2000 and seven subsequent resolutions thereafter, to promote women’s leadership in peacebuilding, implementation has not been optimal. Speaking at the event, UN Women Executive Director Phumzile Mlambo-Ngcuka pointed out some trends to reverse: “The international community tend to be bystanders when internationally agreed provisions of security are being ignored,” she said.

“The percentage of women that are involved in mediation, given the quality and the potential of women to make a difference, is still very low,” she added. She urged action to improve the implementation of National Action Plans and more investment in the economic needs of women and their rehabilitation and reintegration in the aftermath of crisis.

With just two years left until the 20th anniversary of UNSCr 1325, other participants shared the sense of urgency.

“We need to sensitize and mobilize more; and we have to have more national plans of action [in Africa] but also implement the mechanisms that we have set,” said Bineta Diop, Special Envoy of the Chairperson of the African Union Commission on Women, Peace and Security. “We need your support to strengthen the data collection machinery on women, peace and security at the national level.” 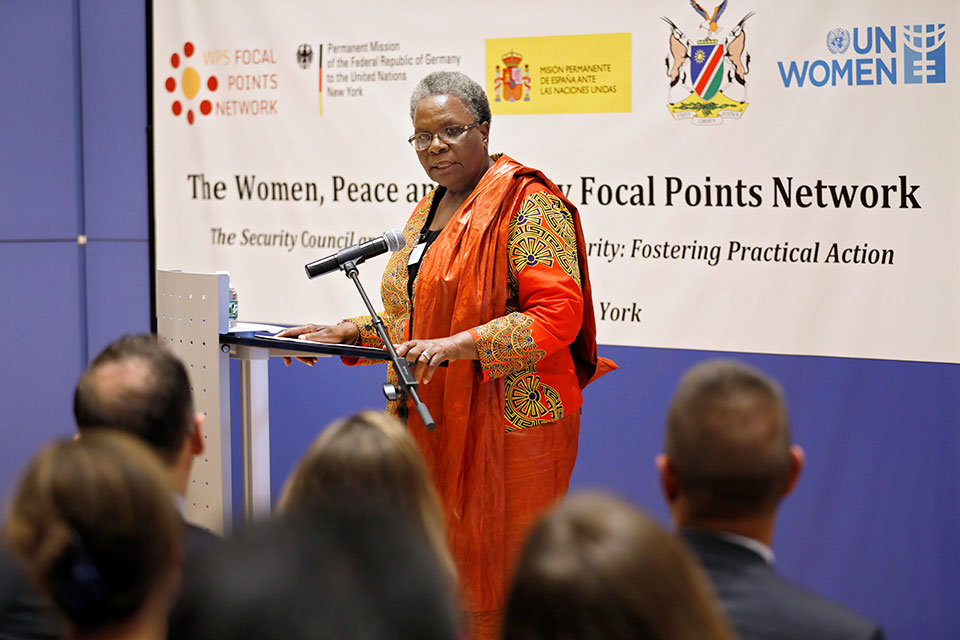 Netumbo Nandi Ndaitwah, Namibia’s Deputy Prime Minister and Minister of International Relations and Cooperation, said: “We need to bring more people on board to sign up to the WPS agenda,” adding that “peace is something that we need in our homes, even in areas where there are no conflicts… As we are discussing women and peace we cannot overlook the issue of disarmament and the issue of small arms and light weapons, because these small arms are being used to [perpetrate] gender-based violence.” Namibia is the incoming Chair of the WPS Focal Points Network, replacing Germany in the same role in 2019.

Many participants noted the need for more investment to promote women’s full participation and supporting women’s leadership at community levels. Tanya Gilly-Khailany from Iraqi Kurdistan, Co-founder of SEED Foundation and former parliamentarian, who legislated to secure 25 per cent quota for women in provincial councils, reminded why the women peace and security agenda is critical at the grassroots level: “These resolutions are important, and they have to be there, because it means that the world is taking notice of the plight of women. Women’s rights and status is linked to security and prosperity of nations. So we need to look at the rights of women in conflict countries as an essential part of the solution.” 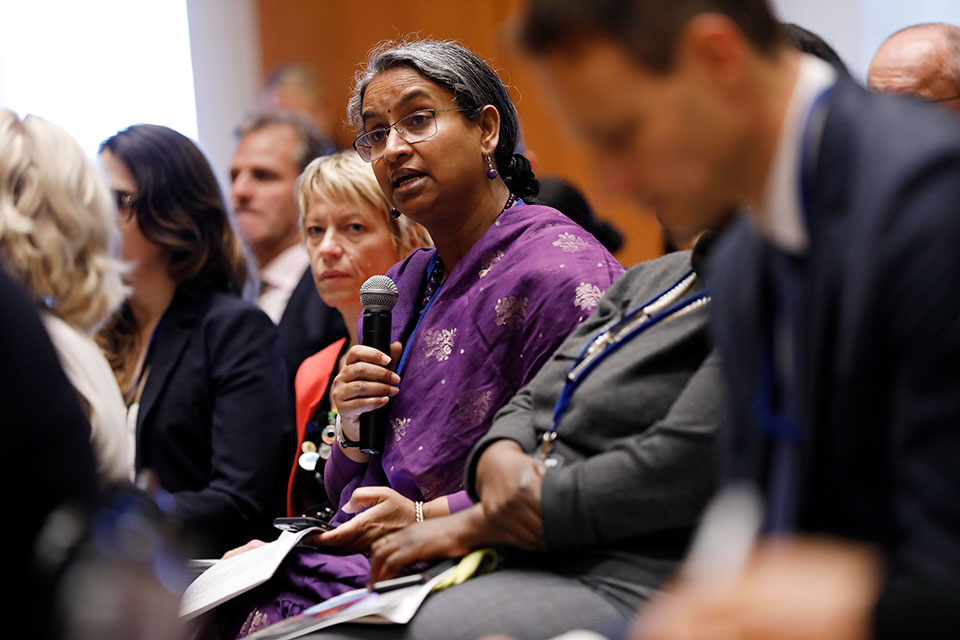 The WPS Focal Points Network, launched in 2016 by the Government of Spain, is a cross-regional forum for Member States and regional organizations, which collaborates with UN agencies and civil society to share experiences and best practices in advancing the implementation of Security Council resolutions on women, peace, and security. UN Women serves as the secretariat of the Network, which is currently composed of over 80 members, ten of which are current members of the Security Council, and 10 are slated to be Council members in 2019. Canada’s Minister of Foreign Affairs, Chrystia Freeland, announced during the meeting that Canada and Uruguay will co-chair the WPS Focal Points Network in 2020.

As part of the WPS Focal Points Network, Member States shared their progress, emerging challenges and recommendations, including creating more awareness, taking into account the experiences of migrant and refugee women, and engaging young women in peacebuilding, making the link with the Youth, Peace and Security agenda. Several speakers also highlighted the importance of utilizing existing mechanisms within the UN Security Council for investigating and prosecuting acts of sexual and gender-based violence, increasing the number of female peacekeepers and increasing briefings by women to the Security Council on pressing matters.

In her closing remarks, Susanne Baumann, Federal Government Commissioner for Disarmament and Arms, Control and Head of the Directorate-General for International Order, the United Nations and Arms Control at the Federal Foreign Office, Germany noted that, “We have to go beyond pure rhetoric and implement our agenda. The Security Council needs to take action.”

The next meeting of the WPS Focal Points Network will be hosted by Namibia from 10 – 11 April 2019, under the theme, “Women, Peace and Security: Towards Full Participation.”

Related News
21/10/2020
In the words of Miriam Coronel-Ferrer: “I became the first female negotiator to sign a final peace accord with a rebel group”
14/10/2015
Turn words into action involving women for lasting peace
13/10/2015
The most underutilized tool we have for successfully building peace is the meaningful inclusion of women – Executive Director
14/05/2013
In the words of Saran Keïta Diakité: Girls receive a visit from a different man every night, a ‘new husband’
21/07/2019
Inclusive peace in Afghanistan means ‘women at the centre’, urges UN deputy chief in Kabul
END_OF_DOCUMENT_TOKEN_TO_BE_REPLACED