(United Nations) 13 March 2018 – On 12 March, opening day of the 62nd Session of the Commission on the Status of Women (CSW62), the Spotlight Initiative, a multi-year partnership between the European Union and the United Nations, brought together leaders from Government and civil society to discuss strategies for eliminating violence against women and girls. 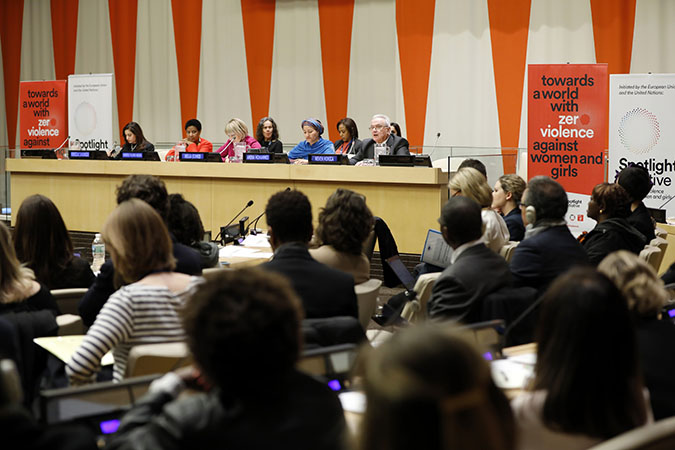 Bringing together experts, Member States, as well as representatives of civil society and the women’s movement, The Spotlight Initiative - Ending violence against ALL women and girls, “Leaving no one behind” event provided an overview of the latest research, policy developments, promising practices and intervention models on “leaving no one behind”. Photo: UN Women/Ryan Brown

During the session: “Under the Spotlight: Ending Violence against ALL Women and Girls,” presenters highlighted the importance of recognizing the multiple intersecting forms of discrimination faced by women and girls, and how to ensure that policies and programmes to confront violence “leave no one behind.”

“Violence against women and girls has nowhere to hide. We’re coming for it, in all its forms and manifestations, and around the world,” said Deputy Secretary-General Amina J. Mohammed who made the keynote address.

“Violence against women and girls is one of the worst violations of human rights. We must address it in all forms, everywhere. With the Spotlight Initiative, we say enough is enough,” said Neven Mimica, European Commissioner for International Cooperation and Development who delivered opening remarks.

At the ECOSOC Chamber at United Nations Headquarters, panelists agreed on the urgency of including women and girls who experience violence and discrimination based, not only on gender but also on ethnicity, nationality, age, disability, income, sexual orientation, and other factors.

In her remarks, Helga Schmid, Secretary General of the European External Action Service, emphasized the need for a collective response. “We need to engage as many [actors] as possible, international, regional organizations, individual states, but very importantly, non-state actors and civil society organizations.”

Experts included Ana Leticia Aguilar Theissen, Presidential Secretary for Women, who described anti-violence efforts in Guatemala, Lizzie Kiama, an advocate from Kenya who said that women with disabilities were “10 times more likely to experience violence than women without disabilities”, Dubravka Simonovic, UN Special Rapporteur on Violence against Women described current international policy and legal mechanisms, Tarcila Rivera from Peru underlined the special challenges faced by indigenous women and girls, and Miki Wali, a Trans and Youth advocate from Fiji urged wider efforts for inclusion of the LGBTQ community in policies and programmes.

The panel was moderated by News Anchor and Producer Munizae Jahangir from Pakistan, daughter of Asma Jahangir, a prominent human rights advocate and former UN Special Rapporteur who died in February. Under-Secretary-General and Executive Director of UN Women Phumzile Mlambo-Ngcuka paid tribute to the former Special Rapporteur during her closing remarks.

The Executive Director applauded the #MeToo movement and women in Hollywood as having energized changes in attitudes about sexual harassment. “We want to continue to forge an alliance with women who are in that [Hollywood] space so that their victory will be everyone’s victory,” Mlambo-Ngcuka said.

Launched in September 2017, the Spotlight Initiative will deploy targeted, large-scale investments in Asia, Africa, Latin America, the Pacific and the Caribbean, aimed at achieving significant improvements in the lives of women and girls.

The Spotlight Initiative is supported by a multi-partner trust fund, with the EU as its main contributor in the order of EUR 500 million, while other donors and partners are invited to join. The effort is being administered by the UN’s Multi-Partner Trust Fund Office, with the support of UNDP, UNFPA and UN Women, overseen by the Executive Office of the UN Secretary‑General.

Related News
19/06/2013
It is time for action to end violence against women: a speech by Lakshmi Puri at the ACP-EU Parliamentary Assembly
09/12/2015
Zero tolerance a must to end violence against women and girls leaders say at global UN conference
20/11/2015
Statement by UN Women Executive Director Phumzile Mlambo-Ngcuka for International Day for the Elimination of Violence against Women
06/02/2013
New law in Kyrgyzstan toughens penalties for bride kidnapping
24/12/2012
Confronting dowry-related violence in India: Women at the center of justice
END_OF_DOCUMENT_TOKEN_TO_BE_REPLACED