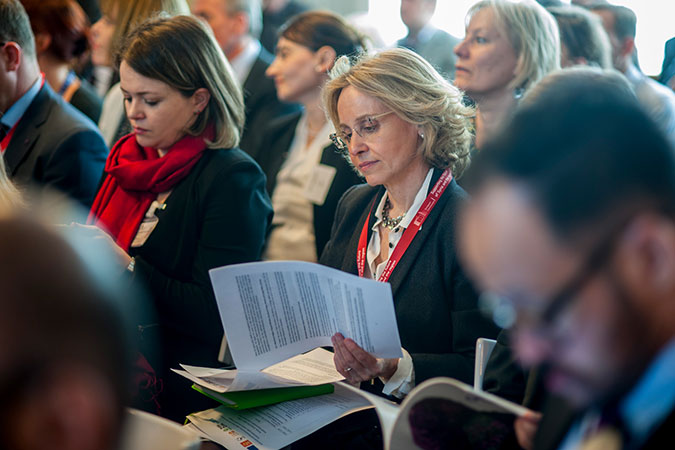 Scenes from the side event at the second conference on 'Supporting the future of Syria and the region', taking place in Brussels from 24 to 25 April, co-chaired by the European Union and the United Nations. Photo credit: Tineke D'haese/OXFAM

The European Union (EU) and the United Nations (UN) are co-chairing the second conference on 'Supporting the future of Syria and the region', which will take place in Brussels from 24 to 25 April.

The conference will bring together participants from more than 85 countries and organizations at ministerial level and the first day will focus on a dialogue with NGOs from Syria and the region. 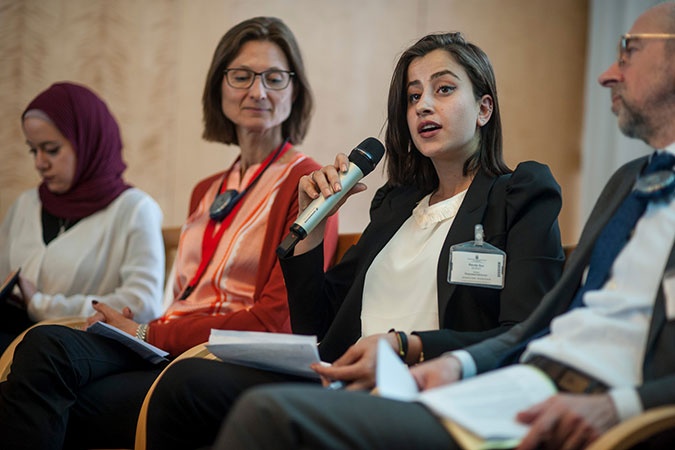 Side event at the second conference on 'Supporting the future of Syria and the region', taking place in Brussels from 24 to 25 April. Photo credit: Tineke D'haese/OXFAM

"No women, no peace."
One of the key messages that #SyrianWomen will deliver today to international policy-makers on the sidelines of the EU-UN Syria Conference 2018 in #Brussels. Read more: https://t.co/Ai2Bmgk75w #SyriaConf2018
Stay tuned for live updates!
Photo: @OxfamEU pic.twitter.com/jrz3fw3NoC

In its eighth year, the Syrian crisis has deepened, with an estimated 13.1 million people currently in need of humanitarian assistance, of whom 5.6 million people have fled the country and registered as refugees, mainly in neighbouring countries, and 6.6 million people are internally displaced. The first three months of 2018 witnessed some of the highest levels of displacement since the beginning of the crisis, according to the latest figures from OCHA.

The escalating humanitarian crisis in Syria has devastating and specific consequences for women and girls. From food insecurity to loss of education opportunities, lack of safe water supply or health services, and high rates of gender-based violence, women and girls are at the frontlines of the crisis. In 69 per cent of the communities assessed, early marriage was reported as a concern.

At the sidelines of the conference, UN Women, together with the European Union, UNFPA, Kvinna till Kvinna, Women’s International League for Peace and Freedom, CARE International and Oxfam, is organizing a side event on 24 April. The side event will feature a discussion between policy makers and ten Syrian women who will present their distinct perspectives on the conflict. Read the media advisory>

Proud to deliver intro remarks at UN Women event hosted by Sweden in margins of #SyriaConf18 to discuss role of women in humanitarian action, resilience and dialogues. I’ve met so many impressive women working for peace in Syria. #EU and #EEAS fully behind these efforts. pic.twitter.com/BXUIVNOIcf

Speaking at the side event, UN Women Deputy Executive Director, Yannick Glemarec, said: “We know that women, their organizations and their networks have pragmatic solutions to offer. And that empowering women and girls is an essential part of building peaceful communities that are less susceptible to the threat of violence and radicalization.”

“Women’s organizations and women leaders have the knowledge, experience and expertise needed to help broker a sustainable settlement. And we simply cannot afford to ignore this in Syria,” he added. Read the full speech>

"You have my word that when real negotiations start in #Syria, women will be part of them" -Staffan De Mistura, UN Special Envoy to Syria #SyriaConf2018 #SyrianWomen pic.twitter.com/1hve8Zg1AJ

Watch the public parts of the ministerial conference on 25 April via the European Council live streaming platform at http://video.consilium.europa.eu.