More than one million South Sudanese refugees have crossed over the border into Uganda since 2013. Along with immediate assistance, they need long-term support, including therapy to cope with trauma and opportunities to earn a living. UN Women-supported therapy groups in one refugee settlement have helped women come together, heal and discover new beginnings. 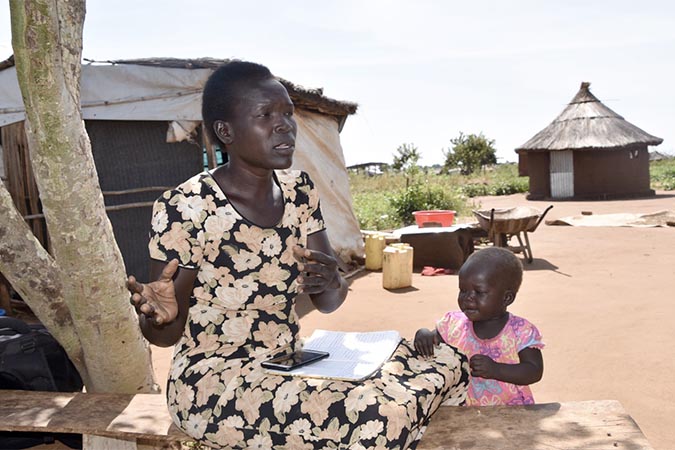 Pasca Kole, a refugee woman from South Sudan, with her daughter whom she gave birth to shortly after arriving in Pagirinya Settlement in Uganda. Photo: UN Women/Aidah Nanyonjo

Pasca Kole is a 42-year-old refugee woman from South Sudan living in the Pagirinya Settlement in northern Uganda. In July 2016, when the war reached her village in Pagere county, South Sudan, Kole escaped, along with her three children aged 14, 7 and 3 years. She was eight months pregnant at the time, expecting her fourth child. It was not an easy journey.

“We were stopped by the security officers at the South Sudan border, they refused to let us cross over at first,” recalled Kole. But the stakes were too high for Kole, and eventually she managed to cross after bribing the border security. “By the time we reached Elegu town in Uganda, it was already dark.”

Heavily pregnant, traumatized and now responsible for all her children, as her husband had stayed behind, Kole’s life as a refugee in Uganda was fraught with challenges.

“I came bare handed,” she explained. “I got a plot of land, but I couldn’t construct a house by myself because I was sick. I could not send my children to school. Imagine someone who used to work in an office, now depending on handouts.”

Kole is among the estimated 1,061,000 refugees from South Sudan who have crossed over the border since 2013. Most of them don’t know if and when they would go back to their home country. In these situations of protracted crises, needs are complex and long-term. Beyond food and shelter, women and girls also need psychosocial therapy to overcome the severe trauma they have experienced. 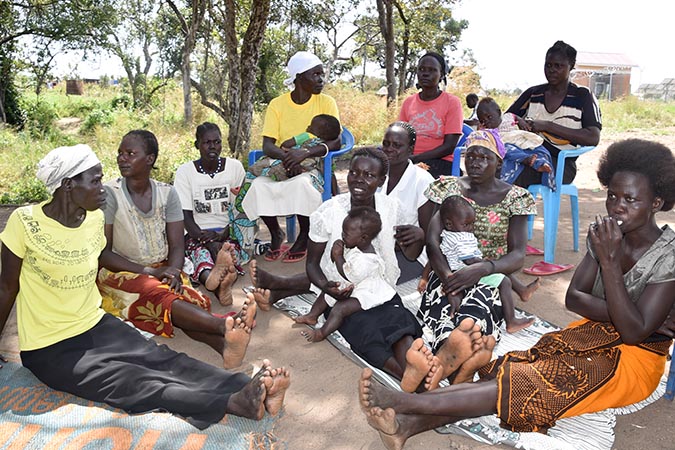 Funded by the United Nations Central Emergency Response Fund and the Embassy of Norway, UN Women and its implementing partner Transcultural Psychosocial Organization (TPO) is providing cognitive behavioural therapy to 5,233 women since 2016. Kole enrolled into group therapy with 12 other women suffering from trauma and post-traumatic stress. The programme also offers entrepreneurship and leadership training to women so that they can start living productive lives.

The therapy group became a lifeline for Kole. The members met every two weeks to share their stories and problems and came up with solutions. For example, Kole’s group supported her to build a house and helped her enroll her children in school. Kole gave birth to a baby girl almost two years ago and now her husband has also joined her in Uganda.

“I used to have a lot of worries because of what I went through. But when members of the group started sharing their stories, I cried throughout the session,” shared Kole. “Their stories were horrible. I realized I was not alone. In fact, my problems were smaller compared to some of theirs. That’s how I finally started coping with my situation. The group gave me hope and courage to live again.”

Immaculate Anyango, a social worker who works with the groups explained that Kole’s group has completed the biweekly therapy sessions and now meets twice a month, as a support network. “We empowered them, and now they continue to meet on their own to discuss how to improve their lives.”

Saluwa Grace, 25, further elaborated: “As group members, we love each other. We are united and work together. For example, the food ration we get is not enough, but no member has to sleep on an empty stomach. Fellow members share their food. If it is about buying medicine or books for children, we collect some money from each member and contribute.” 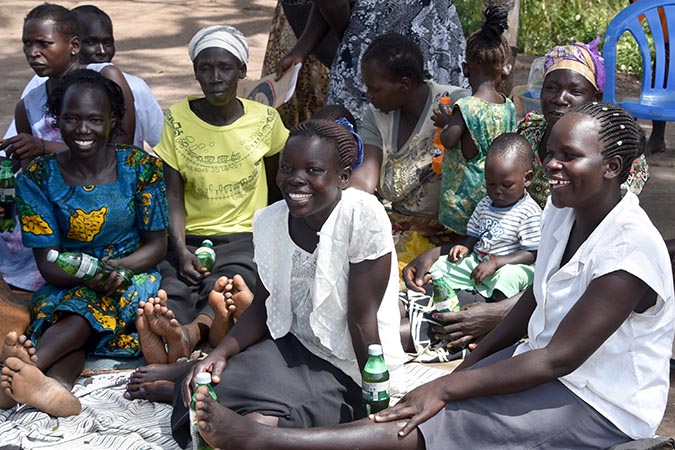 The groups also help in diffusing tension between family members and reduce the risk of domestic violence. “Whenever I have domestic problems, I share with my group,” said Grace. “One day, my husband beat me up and burnt all my clothes. I talked to my group members for advice. They visited my home and counselled both of us about the benefits of ending violence in our home.” Grace and her husband are living peacefully now, and have also learned anger management skills.

“Today our faces are shining. There is a lot of change in our lives,” added Kole, stressing on the need for continued support. “What we went through cannot disappear at once, it’s a process.”

To build women’s resilience further, the programme has provided start-up funds to the groups to raise goats, make and sell bedsheets and other handcrafts, and invest in small savings schemes. It also provides legal aid and organizes community dialogues to prevent domestic violence and child marriage.

“Now that women have overcome trauma, and are earning some income, they feel they have more voice. Many of them have started sending their children to school and meeting their basic family needs,” said UN Women acting Deputy Country Representative Anna Mutavati, adding, “We are now scaling up the programme with new funding from the Government of Norway, to increase the opportunities for women to lead and participate in refugee and host population decision-making processes, enhance adult education and vocational skills, as well as improve their economic opportunities.”

As for Kole, she is raising goats and saving money now. Her group received 500,000 Ugandan shillings (USD 130) from the programme and bought six goats. “Our goats reproduced and the number has already doubled,” she says with a big smile. She is also the chairperson of the therapy groups and mobilizes the members to meet regularly.

Related News
19/08/2022
In Uganda, refugee women’s leadership drives inclusive humanitarian action
15/06/2020
Women peace mediators become key actors on the front lines of COVID-19 prevention in refugee settlements in Uganda
19/08/2019
Not waiting for handouts: Five stories of resilience from one of the world’s largest refugee camps
18/06/2018
From where I stand: “Always rely on yourself”
23/05/2016
From where I stand: Nahimana Fainesi
END_OF_DOCUMENT_TOKEN_TO_BE_REPLACED