Take Five: "We have the expertise to bring solutions" 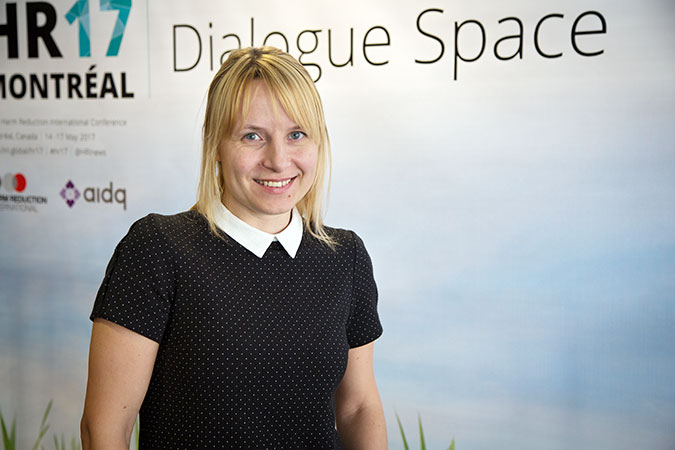 Svitlana Moroz is a Ukrainian women’s rights activist living with HIV. She is one of the founders of the Union of Women of Ukraine affected by HIV “Positive Women” and since 2013 she has coordinated activities for the Eurasian Women’s Network on AIDS. UN Women partnered with the Eurasian Women’s Network on AIDS on a number of initiatives, including on the engagement of women living with HIV in localizing SDGs in Ukraine.  Svitlana is a leading author of the  community-based research led and driven by women living with HIV “Sexual and reproductive health, gender equality and human rights, gender-based violence, economic and political opportunities of women living with HIV in Ukraine”.   As thousands of HIV activists from around the world attend the 22nd International AIDS Conference in Amsterdam from July 23 to 27, Moroz spoke to UN Women about the importance of women’s voices in the conference and beyond.

The theme of this year’s 22nd International AIDS Conference is “Breaking Barriers, Building Bridges.” What are some key challenges and opportunities you see for the meaningful engagement of women living with HIV in shaping policies and programmes that impact them?

Women living with HIV still don’t have access to adequate mechanisms and resources to meaningfully engage in the design of the national HIV strategies and plans. For decades, we have been talked at and used to advocate for HIV prevention and treatment, but only sporadically engaged to tackle key issues that fuel HIV, such as gender inequality and gender-based violence. Now we are seeing the growth of a new generation of women living with HIV who clearly prioritize addressing non-biomedical drivers of the HIV epidemic, such as social injustice, gender inequality, women’s human rights, sexual and reproductive health and rights, and violence against women and girls. However, they need support to be consistently engaged to shape policies.

When women and girls living with HIV participate in HIV response and decision-making, does it make for better outcomes? Can you give some examples?

When women participate in HIV response and decision making, we have more chances that their needs are met. World Health Organization’s consolidated guidelines on sexual and reproductive health and rights of women living with HIV, launched in February 2017, is a case in point. It was compiled with the participation and contributions from women living with HIV from around the globe. These women advocates reviewed outdated protocols (2006), conducted their own community-based research and provided a set of clear and practical recommendations for the guidelines based on our needs and preferences.

For example, with their inputs, WHO now recommends that policy makers and service providers should recognize the increased risk of intimate partner violence faced by women living with HIV who are considering voluntary HIV disclosure and facilitate safer disclosure, along with access to violence prevention and care services. Informed by the experiences of women living with HIV, the new WHO guideline also recommend that elective caesarean section (C-section) should not be routinely recommended to women living with HIV.

What are some of the major unmet needs and priorities of women living with HIV in the region?

National programmes and strategies in our region rarely factor in specific and diverse needs and priorities of women living with HIV, especially women from “key populations” (sex workers, women who use drugs, transgender people). For instance, if you are a woman living with HIV, who is using drugs and is a sex worker, you would be offered access to HIV treatment, a clean syringe and a condom. But you wouldn’t be able to access rights-based sexual and reproductive health services (including safe abortion), cervical cancer screening or protection from intimate partner violence or violence from the police.

In the meantime, criminalization of HIV, drug use/possession and sex work is on the rise, combined with the prohibition or lack of substitution therapy programmes, threats of losing the legal custody of children, societal judgment, harmful gender norms, cultural and religious traditions.

In Eastern Europe and Central Asia, according to UNAIDS, in 2016, women accounted for 42 per cent of new HIV infections; and among young women aged 15-24, the numbers reached a staggering 57 per cent. How can we ensure that the Sustainable Development Goals (SDGs) equally benefit and build on the agency of various groups of women, including young women and girls, to prevent and mitigate the impact of HIV in the region?

We must create safe and engaging platforms and spaces for women to participate, voice their priorities and be heard. We must support the women’s movement to invest and nurture women’s leadership skills, build alliances, conduct needs assessments and gender analysis of the laws and legal frameworks that hold back women living with HIV from enjoying their human rights.

One of the very practical measures is to integrate gender-responsive indicators into every national HIV strategy and programme, with participation and inputs from women in all their diversity. In the last few years, we have seen strong support from UN Women and UNDP for capacity building on the SDGs localization process. For example, UN Women’s support and collaboration with the International Community of Women Living with HIV resulted in guidance that looks at the SDGs from the perspectives of women living with HIV. It has also   increased the capacity of women to advocate for the inclusion of their perspectives in policy-making to localize the 2030 Agenda. In Ukraine, women living with HIV successfully mobilized and engaged in the national consultations and working groups to localize the SDGs and put their needs on the agenda.

What is your message to policy-makers at this conference?

We need a seat at the table and we need to be heard—this should become a systematic and consistent effort with commitments and strong accountability. Realizing these commitments and being accountable to these commitments must be measured by the gender-responsive changes in the laws and the size of investments. Our shadow reports and our community-based research provide a wealth of information. We have the expertise to bring solutions. We have to be part of the solution. End structural violence against women and give us voice, then we will stop dying of AIDS!