Empowerment through employment for Syrian refugee women in Jordan

1.3 million refugees are currently hosted by Jordan, a country that continues to demonstrate humanitarian leadership in the Syrian refugee crisis. In 2012, UN Women opened its first Oasis— a centre for refugee women and girls to access emergency aid and specialized gender-based violence services at Za’atari refugee camp in northern Jordan. Over time, the scope and impact of the Oasis model has expanded to encompass multi-sectoral services that build women’s resilience and empowerment. Currently, UN Women operates four Oasis centres in two Jordanian camps: Za’atari and Azraq. 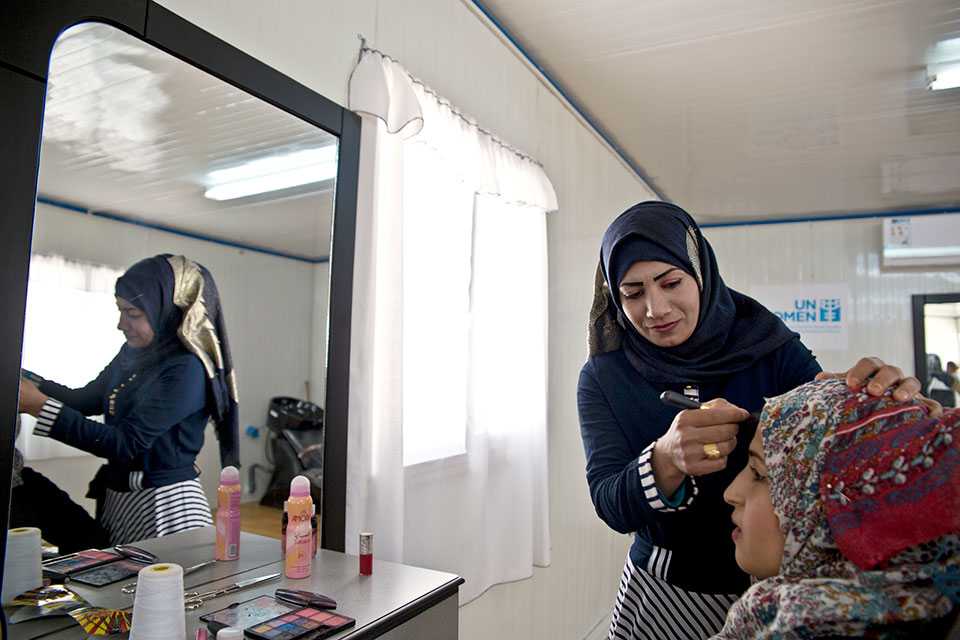 Intesar Hassan, 20, Syrian refugee woman learned to be a hairdresser through aworkshop at the Oasis Center for Resilience and Empowerment of Women and Girls in the Azraq refugee camp.Photo: UN Women/Lauren Rooney

In 2015, Intesar Hassan and her family fled Syria shortly after the death of her mother. Hassan, her ailing father and her five siblings (four of whom are medically blind) settled in the refugee camp in Azraq. At just 17 years old, Hassan became the head of her household. “The beginning was incredibly hard,” she remembers, so when the opportunity came to work in UN Women’s Oasis, she took it right away. “I knew this was a way to provide for my family. It was the best choice I have made. Today, not only am I sustaining my household, I am also working in a sector that I’m passionate about: beauty.”

As part of UN Women’s cash-for-work programme at the Oasis, Hassan now earns a salary as a qualified beautician doing make-up, hair and nails. “Before the Oasis, I did not have much of a chance to do this for women. Now I make women happier on a daily basis. Not only has the Oasis provided me with this chance, but it has helped me improve my psychological well-being.”

At Za’atari, Ghada Um Saleh, 48, faced challenges similar to those of Hassan when she arrived at the camp. With five children to support and a husband who was unable to work, Saleh was desperate to find work. She enrolled in the centre’s cash-for-work programme and trained as a tailor. She recalls having much to learn when she first started at the Oasis, but with time she began to excel. “The Oasis gave me courage, and the skills to be a good tailor.”

After a year of honing her tailoring skills, Saleh sought work outside the centre. She had the necessary skills to get a job in the tailoring industry, but she, and many other women, were unaware of how to secure a work permitOnly 3 per cent of the work permits issued to Syrian refugees went to women in 2017. To fill this gender gap, UN Women, in partnership with the UN Office of the High Commissioner for Refugees (UNHCR) and the International Labour Organization (ILO), began hosting awareness sessions and job fairs specifically geared towards women. Saleh is now employed by Jerash Garment Factory, and, as of January 2018, 11 per cent of the work permits are going to women refugees. 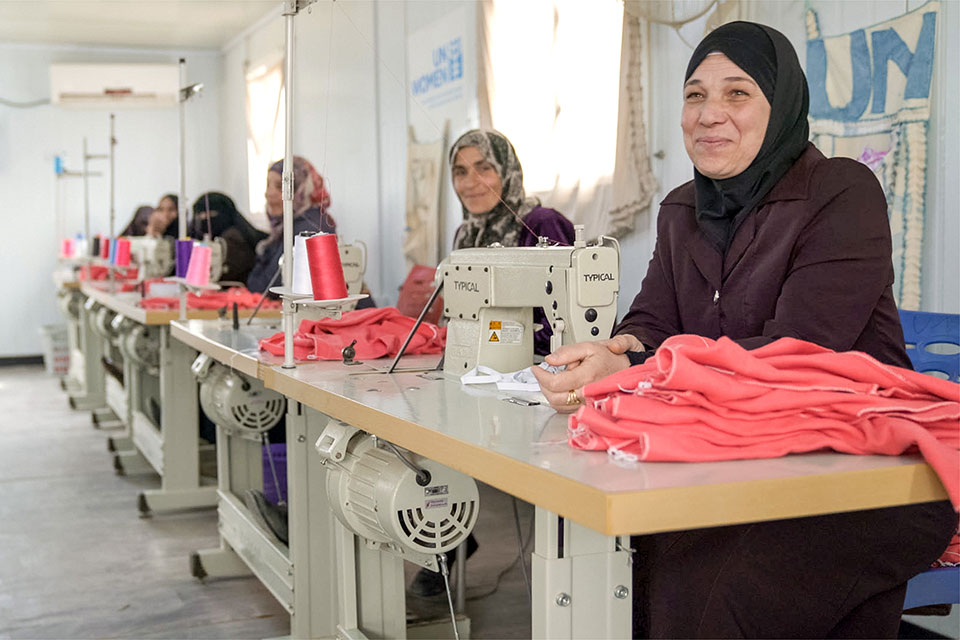 A scene from the ‘Oasis Center for Resilience and Empowerment of Women and Girls’ operated by UN Women in the Za’atari refugee camp in Jordan. Photo: UN Women/Christopher Herwig

Hassan and Saleh’s stories exemplify just two of the 405 cash-for work opportunities provided by UN Women each day in Jordan. In addition to empowering women through employment, the Oases childcare services benefit 400 children daily and refer an average of 75 refugees to counselling and protection services each month. With the generous support of the Governments of Australia, Finland, France, Iceland, Italy, Japan and UN Women National Committees, the Oases support 16,000 refugees every year.

“As the number of female-headed households is on the rise among Syrian refugees residing in Jordan, it has never been more important to ensure that our collective response reaches and empowers women,” said Ziad Sheikh, UN Women Representative in Jordan. “The Oases have been recognized as highly successful models with proven results and impact for women in generating income and creating an enabling environment for their own empowerment.”

Moving forward, the Oases will integrate their remedial education with their business development and job placement services, to equip refugee women with the skills and knowledge they need to start a small business or secure decent work in the future.