In the words of Spartak Kosta: “The media should raise awareness about the issue of trafficking of women and girls” 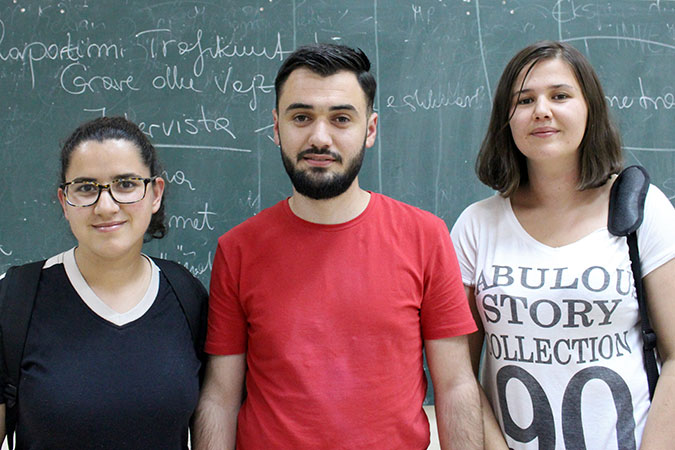 Xhoana Vranici, Spartak Kosta and Kleodora Elmasllari (left to right) are among the first group of journalism students in Albania to have followed a specific course on how to report trafficking of women and girls  Photo: UN Women Albania/Yllka Parllaku

Spartak Kosta is a third-year journalism student at the University of History and Philology in Tirana, Albania. He was among the first group of students to take a new university course on the reporting of trafficking of women and girls. The educational course was developed at the recommendation of a UN Women monitoring report. The study finds that journalists often write shallow trafficking stories that lack deep analysis and use unethical language with regards to victims.

Using core funds, the course was supported by UN Women and hosted in cooperation with the Department of Journalism, the Ministry of Interior, academics, students and journalists. Over the last four years, UN Women, with support from the European Union, has been working with Albanian media outlets to improve reporting on trafficking cases and to better inform the public on the issue.

Now I have the full knowledge on the sources I can use to start an investigative story. I know where to focus and how to shape the story. That is why I think journalists and the media should launch an awareness campaign about trafficking of women and girls. Increased awareness about the issue would help audiences look at trafficking from another perspective and increase support for victims.

In my opinion, the course should be taught to all journalism students.

The course covers so much material that I think it would be beneficial for it to be taught over a longer period of time. And, in the future, I think the course should have more information about shelters and their services so that the public is informed of the available resources.”

Related News
28/06/2021
Winners of the comic and cartoon competition, “Generation Equality: Picture It!”
29/07/2019
In the words of Milica Gudović: “Economic empowerment is crucial, not only for survivors, but for any woman”
13/11/2018
From where I stand: “People with disabilities don’t talk about the violence they experience because often it means reporting the people closest to them”
29/09/2017
Making the change: Promoting gender equality in Moldova’s media
30/03/2016
Breaking the cycle of human trafficking in Albania
END_OF_DOCUMENT_TOKEN_TO_BE_REPLACED