UN Women convenes experts on sexual harassment at the workplace

What does zero-tolerance to sexual harassment look like? Feminists, gender experts and UN officials came together to discuss promising practices to curb sexual harassment and assault in a UN Women-organized “Feminist Think Space” from 30 to 31 July in New York. 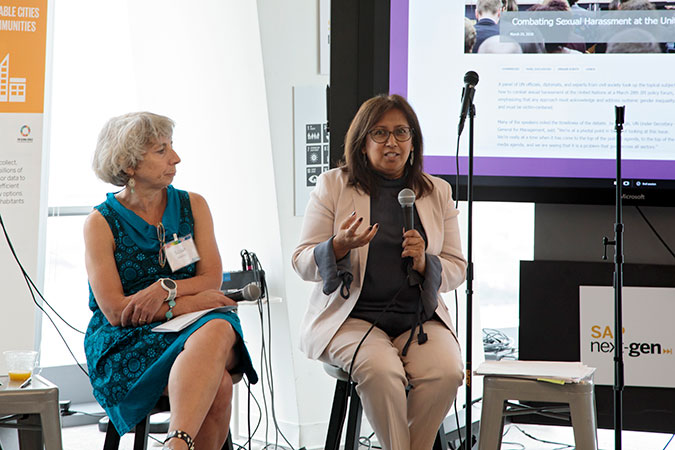 Purna Sen, UN Women’s Director of Policy, currently on special assignment as Executive Coordinator and Spokesperson on Sexual Harassment and Discrimination with Susan Maddox, Chief of the Disciplinary Unit in the Administrative Law Section of the Office of Human Resources Management in the Department of Management at the United Nations Secretariat. Photo: UN Women/Jodie Mann

Hosted by Purna Sen, UN Women’s Director of Policy, currently on special assignment as Executive Coordinator and Spokesperson on Sexual Harassment and Discrimination, the two-day event gathered inputs from feminist thought leaders and gender experts to inform UN Women’s ongoing work on sexual harassment as a form and expression of gender inequality. This included UN Women’s engagement with the work of the UN Chief Executives Board High Level Task Force on sexual harassment. Since its creation by UN Secretary-General António Guterres in November 2017, the Task Force is working to strengthen prevention and investigation of sexual harassment as well as provide better protection and support to victims.

“The data tells us that a lot of women fall by the wayside because the system is too difficult. We have to do better, especially within our own system,” said UN Women Executive Director, Phumzile Mlambo-Ngcuka, speaking at the event. “Men become repeat offenders because they can. Now we’re seeing men who were previously untouchable being punished. And that needs to be the norm. You cannot harass hundreds of women over your career and then retire with a bonus and a golden watch and a party,” she added.

The global outrage against sexual harassment spurred by #MeToo and other movements has challenged impunity across the world. Countless institutions, including the United Nations, are under scrutiny to end gender inequality and deliver justice and human rights for victims. 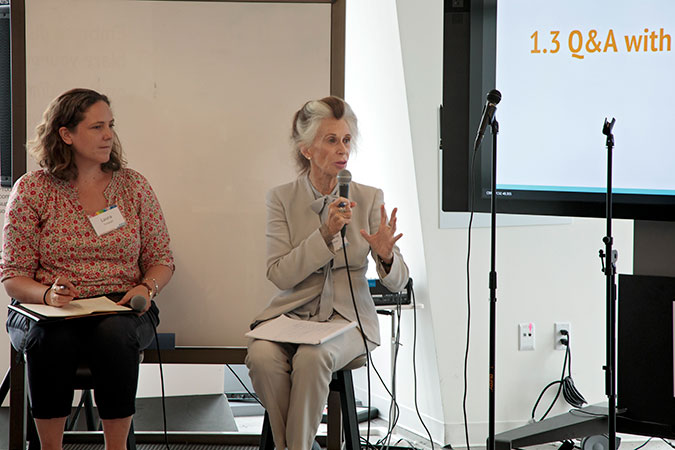 Catharine A. MacKinnon, a Professor of Law and a practising lawyer, speaks about promising practices to curb sexual harassment and assault Photo: UN Women/Jodie Mann

Catharine A. MacKinnon, a Professor of Law and a practising lawyer who created and implemented the legal claim for sexual harassment and the concept of “gender crime” at the International Criminal Court, agreed that leadership and survivor-centred policies are crucial for preventing and addressing sexual harassment. “I’ve never met a survivor who didn’t want to tell their story. It is just a question of when, how, to whom, under what conditions. It is our challenge to be worthy of their trust” she said, adding: “There’s a real role for leadership and accountability—people in leadership, people at the top standing up and saying we’re not for this and meaning it.”

“Reporting won’t increase until people feel supported by the procedures,” said Ms. Sen. “While we must talk about procedures, we need to talk about how different leadership and cultural change make a difference.”

Participants acknowledged the unique momentum to eradicate sexual harassment and other forms of violence against women and discussed measures to bridge the persisting gaps and challenges in existing UN policies and procedures.

Esther Waweru, Legal Adviser with Equality Now in Africa, identified the need for appropriate follow-up mechanisms and transparent investigations conducted by independent investigators, among other measures.

UN Women’s Director of Human Resources, Greet De Leeuw discussed the current policies and measures in place to address sexual harassment and sexual exploitation and abuse within the organization, which include the establishment of the Workplace Relations Advisor in 2017, regular town hall meetings led by the Executive Director, a revamped handbook of policies and procedures to address sexual misconduct promoted across the organization, and UN Women’s active participation in the UN Chief Executive Board Task Force on sexual harassment.

“UN Women will participate in the screening database on sexual misconduct which prevents the re-hiring of perpetrators,” she added. The database is a new effort to keep track of reported abusers across the UN system.

Adequate training and sensitization of those in leadership positions as well as staff were also raised as critical needs. However, Muthoni Muriu, Senior Director of International Programmes at Oxfam America cautioned, “Transforming organizational culture means examining power structures. Mandatory staff training is not enough, individual face-to-face conversations on ‘What do our values mean to you and how do you live them every day?’ need to happen as well.”

In addition to informing UN Women’s own practices and its engagement with the UN Chief Executive Board Task Force’s ongoing work in creating a joint UN policy to address sexual harassment, the recommendations stemming from the Feminist Think Space will contribute towards a UN Women publication on sexual harassment and assault, to be released in the fall of 2018.