Take five: “Yemeni women and girls are the ones who are paying the price of war” 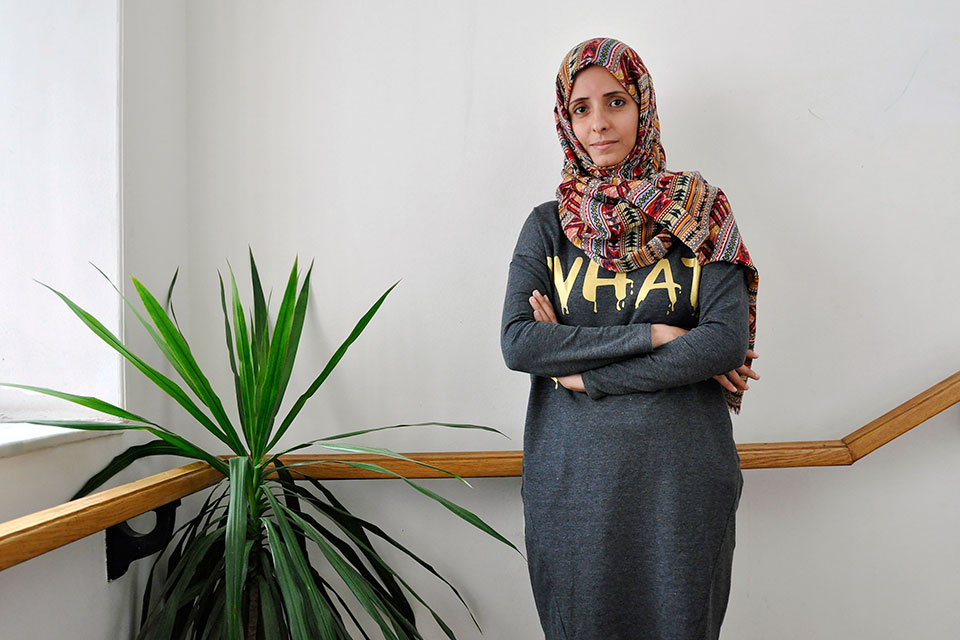 Areej Jamal Al- Khawlani has worked with UN Women as a Programme Associate in Yemen since 2017. Prior to joining UN Women, she was part of the Yemen Parliamentarians Against Corruption and worked for the Mwatana Organization for Human Rights. As the conflict in Yemen nears its fourth year, the conditions are worsening for women and girls: 76 per cent of internally displaced persons (IDPs) are women and children, and an estimated 3 million women and girls are at risk of gender-based violence, according to UNFPA. In this interview, Ms. Al-Khawlani shares the current needs and priorities of Yemeni women and girls.

How has the conflict in Yemen affected daily life for people in the country?

Daily life in Yemen has become very difficult whether it is at home, university or work. More than 22 million people need urgent assistance, people are exhausted and starving

The challenges, both personal and professional, of working under these conditions cannot be underestimated. For instance, the deteriorating security situation in Sana’a means that people cannot even access their work place. But working from home is challenging with the regular power cuts. Can you imagine while you’re working, you’re hearing the sound of explosions and airstrikes near your home?

Are there specific challenges that international organizations are facing in this context?

The dynamics of the conflict have placed many restrictions on the work of international and local organizations. This requires us to think creatively about how we can achieve our objectives to support women and men, girls and boys of Yemen, particularly those most affected by the war.

For instance, while supporting women’s participation in politics, peace negotiations and decision-making bodies is a critical priority, all parties to the conflict tend to think that while the conflict is ongoing is not the time to address women’s right and empowerment issues. There are also heightened sensitivities about gender-based violence issues. Therefore, working on these issues means that non-governmental organizations and international organizations must be careful about how these issues are phrased and addressed through their projects.

Are women and girls impacted differently by the war? What are the unique challenges that they are facing?

Yemeni women are now having to step into roles that were traditionally filled by men because so many men have been killed or injured, forcibly disappeared or have lost their jobs. But now they have the double burden of being the family’s main provider while also performing their expected role of primary caregivers in the family.

The most urgent issues for women include the lack of medical care and the consequences of economic devastation. Women and children also account for the largest number of civilian victims. Reported gender-based violence incidents increased by 36 per cent in 2017, and child marriage rates have escalated to 66 per cent, as of 2017.

How is UN Women supporting women in Yemen?

However, we know the importance of equal representation of men and women in peace negotiations and conflict resolution, and we know that ceasefire agreements can and should contain gender-sensitive provisions. When women are part of these negotiations, the agreements address issues such as sexual violence and include women in follow-up mechanisms.

UN Women supported the establishment of the Yemeni Women’s Pact for Peace and Security, a voluntary platform of Yemeni women from diverse backgrounds, in 2015 and has worked with its members since then. The Yemeni Women Pact calls for women’s engagement in all political dialogues. We support the Pact by facilitating meetings with representatives of parties to the conflict and the Special Envoy of the UN Secretary-General for Yemen. We also try to facilitate informal alliances between women within political groups and members of the Pact so that they can find common grounds and solutions that work for women.

What are the top priorities for women in Yemen at the moment?

Currently UN Women is prioritizing supporting the voices of Yemeni women in political dialogues and peacebuilding processes, to ensure that the UN’s response to the crisis addresses the needs of Yemeni women and girls. For instance, one of the priorities identified by women is to deliver immediate protection and livelihoods services to displaced and marginalized Yemenis. Moreover, UN Women Yemen is working on gender mainstreaming the UN response and addressing information gaps about Yemeni women’s needs and vulnerabilities.

Related News
20/06/2013
Syrian women refugees face forced early marriages and restricted mobility: UN Women report
09/12/2021
Take five: “There are many stories that encourage me to do more”
29/07/2020
In Yemen, women face added challenges posed by COVID-19 amidst ongoing armed conflict
07/03/2019
Yemeni women leaders call for recognition and support of women-led organizations as part of humanitarian response in Yemen
21/01/2019
In the words of Nur Omar: “I’ve healed the wounds of war and feel more confident about my future”
END_OF_DOCUMENT_TOKEN_TO_BE_REPLACED