My take, your take: Changing social attitudes and stopping violence against women in Bangladesh 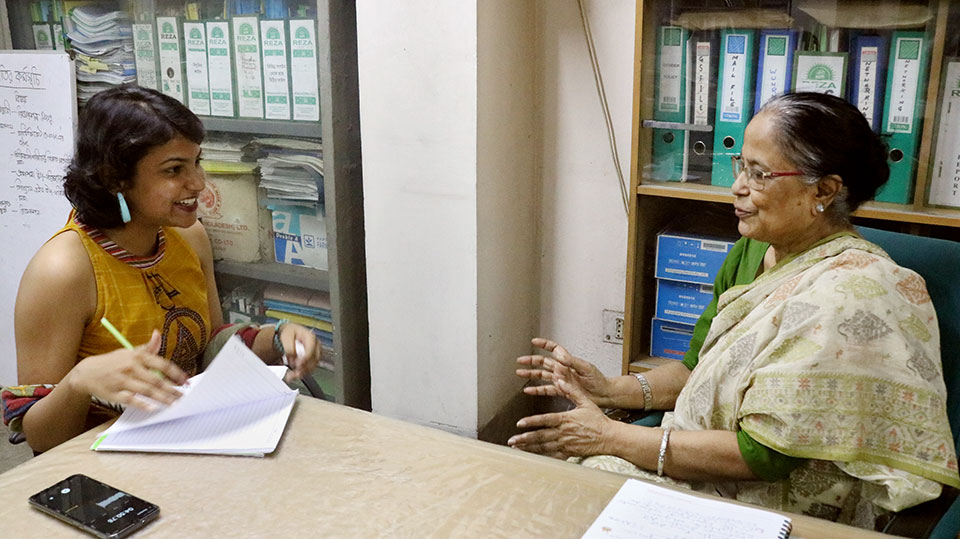 Zefroon Afsary, 25, works with UN Women as a UN Volunteer supporting the Rohingya refugee response programme in Bangladesh. Prior to this, she worked as a journalist and advocated for the rights of transgenders, ethnic communities and domestic workers in Bangladesh.

In her conversation with Ayesha Khanam, Afsary agrees that social attitudes and perception towards women and girls still haven’t changed sufficiently in Bangladesh, despite overcoming economic barriers: “The girl child is still a perceived as a “burden” in rural Bangladesh while teens in Dhaka face gender-based violence at home, public spaces and educational institutions.”

Reflecting upon the progress made for women’s rights since the adoption of the Beijing Platform for Action, Afsary says, we have miles to go in some of the areas highlighted by the visionary agenda, such as, “[Ending] violence against women, access to education for girls and women, and institutional mechanisms for the advancement of women are all lagging. For girls my age, the “women and media” mandate has not been achieved…the Beijing Platform will be relevant until systemic changes are accomplished.”

When and why did you join this field of work?

Ayesha Khanam: Curiosity got the better of me. I started asking the most obvious, yet mind boggling questions, such as, “why is the world inequal? What history has brought us to the current present? Why are little girls taught to be docile? Why are my rights hidden? How do I find them? When do I find them? Are the supposed limitations of a women internally experienced or externally forced? How so?” The search for these answers led me to become a student activist when I entered the university. In 1972 I joined Bangladesh Mahila Parishad, where [I could] take concrete steps to address the core issues I was deeply concerned about.

What has been the biggest change for women in Bangladesh since the Beijing Platform for Action was adopted?

Ayesha Khanam: More than 20 years of groundwork and feminist struggles led to the conference and the Beijing Platform for Action. I remember the sheer excitement, the thirst for knowledge, the buzz that came from the presence of thirty to forty thousand women activists in a room! The most memorable parts for me was the fine-tuning of my own ideas of pluralism, of breaking out of my unconscious biases and taboos as I interacted with other women activists who are different from me.

The biggest change since then is visibility of women! Today we “see” women in all professional arenas, from peacekeeping to sports, politics, business and science. The notion of the “challenging profession for women” has been broken, there is no profession that is “unsuitable” for women. And, this presence of women is not for the purpose of tokenism, there are thousands of women in each of these spaces who have had to claim their place.

In Bangladesh, what hasn’t changed yet for women? Where do we go from here?

Ayesha Khanam: The social attitudes towards women have not changed sufficiently. Whether it’s in the bedroom or the boardroom, attitude towards women is derogatory. A culture of violence has emerged, at home, in the workplace, as well as in public spaces. The propensity of gender-based violence is so high that it seems that the perpetrator can be anyone from law enforcement agencies to the men on the streets. Additionally, there is a tendency of victim blaming which hinders any progress made to curb such violence.

With religious revitalization and [weakened] democracy, women’s rights have suffered a setback in recent times. I believe that lack of education played a big role here. Mainstream curriculum has ignored human rights and gender issues for decades. I see strengthening institutional mechanisms for gender sensitization is an absolute must, especially in the judiciary system. It is important to remember that women are both targets of development and agents of development.

My message to the younger generations is, with equality comes equal responsibility. Be strong, brave and persevere.

Related News
07/12/2021
In Cox’s Bazar, gender-responsive policing efforts build trust with Rohingya women and girls
07/10/2021
From where I stand: Learning sessions gave me the courage to aim for a career as a police officer and end illegal behaviour against women
01/12/2020
Hand over the mic to: Minara
13/11/2019
I am Generation Equality: Shireen Huq, anti-violence crusader
10/09/2013
Half of men report using violence and a quarter perpetrate rape according to UN survey of 10,000 men in Asia-Pacific
END_OF_DOCUMENT_TOKEN_TO_BE_REPLACED