This story was originally published on UN Women’s website for the Arab States region. 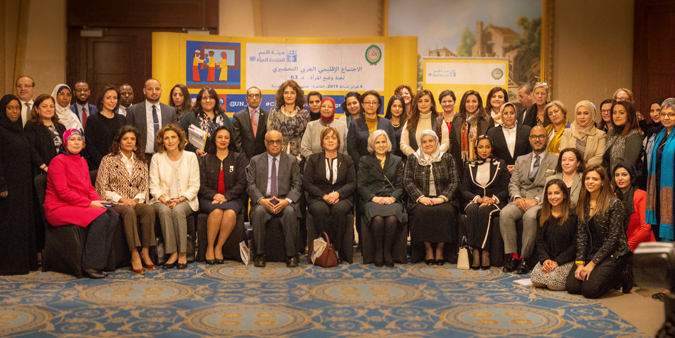 Participants in the Arab regional preparatory meeting for the 63rd Session of the Commission on the Status of Women. Photo: UN Women

Representatives from 19 Arab States Governments and the international community gathered from across the region to participate in the regional preparatory meeting for the 63rd Session of the Commission on the Status of Women (CSW63) that took place in Cairo, Egypt on 4 February 2019.

Held under the auspices of the League of Arab States, with the support from UN Women, the preparatory meeting aimed to develop a common regional position and a set of tangible, concrete recommendations that Member States can take to CSW63 meetings at the UN Headquarters in March. “This meeting is unique in that it brings together representatives from across the region, demonstrating their willingness to work together and articulate a common position that can be leveraged later in New York,” said Ambassador Haifa Abou Ghazalah, Assistant Secretary-General and Head of the Social Affairs Sector at the League of Arab States in her opening remarks.

Ghania Eddalia, Minister of National Solidarity, Family and Women Affairs of Algeria and Chair of the 38th session of the Arab Women Committee said, “I am very happy to be here among my sisters and brothers from the Arab world to discuss and advance the highly important agenda of women’s access to social protection in the region.” After a thorough presentation of Egypt’s progress in the area of social justice and more specifically that of women’s access to social protection and infrastructures over the past years,. Ambassador Ahmed Ehab Gamal El Dine, Assistant Foreign Minister for Human Rights, Social and International Humanitarians Affairs, speaking on behalf of Egypt, the host country, expressed his hope for a successful meeting that would materialize in a concrete and powerful outcome document.

Mohammad Naciri, Director of the UN Women Regional Office for the Arab States, welcomed the participants and commended the League of Arab States initiative to hold this preparatory meeting. He also said that, “increased spending in social protection, public services and infrastructure should be seen as an investment for the economic development of the region”.

Mehrinaz El-Awady, Director of the Center for Women at the United Nations Economic Commission for Western Asia (ESCWA), stressed that, “the challenges in the region place great responsibility on Arab countries to implement their international, regional and national commitments to women. This requires the concerted efforts of all parties. The partnership between the League of Arab States and the United Nations is a vital demonstration of the potential for investing human and financial resources. We hope that countries will adopt this participatory approach at the national level and be open to all partners whether in the governmental, private or public sector to build on their experience, programmes and expertise.”

During the day-long meeting, participants were briefed on the upcoming CSW63 and on the outcomes of the previous sessions, including the organization of the Committee, the membership of its Bureau and on the most relevant technical items to inform the region’s contribution to the final CSW63 outcome document and pave the way for the subsequent regional review of implementation of the 1995 Beijing Declaration and Platform for Action, 25 years since its adoption (Beijing+25).

The meeting focused specifically on the theme of the upcoming CSW63, namely social protection systems, access to public services and sustainable infrastructure for gender equality and the empowerment of women and girls. Delegates examined the specific challenges and opportunities in the region to ensure Arab women and girls can access and participate in such systems in accordance with international and regional legal frameworks.

The meeting agreed upon a set of forward-looking recommendations that were integrated into the “Arab Declaration for CSW 63”. This outcome document that will feed into the proceedings of the upcoming CSW63 reiterates the Arab States’ commitment to effectively implement various United Nations resolutions on women, security and peace, and the Arab Regional Strategy and Executive Action Plan, “Protection of Arab Women: peace and security”. It also calls for strengthening the normative and legislative frameworks to enhance interlinkages between social protection schemes, public services and sustainable infrastructure in order to achieve gender equality and promote women’s and girls’ economic empowerment. The “Arab Declaration for CSW 63” also urges Member States to ensure women’s access to, and meaningful participation in, social protection systems, public services and infrastructure. Finally, it recognizes the need and makes concrete recommendations to build women’s awareness and capacity and mobilize the resources required for the implementation of the commitments made.

Speaking on behalf of UN Women, Åsa Regnér, UN Women Deputy Executive Director, recognized in her concluding remarks the “groundbreaking shifts in personal status laws, in rights becoming more equal, and in women taking on positions of leadership” in the region, and congratulated the meeting’s participants for “making a solid commitment to break down the barriers that prevent women and girls from accessing public services and to make sure that these services are of adequate quality”.

The Arab region consultation took place right before the African ministerial pre-consultative meeting organized by the African Union, providing the opportunity to exchange knowledge and leverage best practices between the regions.

Related News
08/02/2019
African Union calls upon its Member States to prepare for the 63rd Commission on the Status of Women
03/03/2014
Collecting herstories in Egypt
24/02/2014
Opening remarks by Lakshmi Puri on the MDGs, post-2015 development agenda, gender equality and the empowerment of women and girls in the Arab region
20/03/2018
Coverage: System-wide Strategy on Gender Parity: How to walk the talk?
14/11/2017
Standing up for survivors in the Shari’a court every day: Ayah al-Wakil is determined to leave no woman behind
END_OF_DOCUMENT_TOKEN_TO_BE_REPLACED