At CSW 63, youth ask for increased investment, accountability and seat at decision-making tables 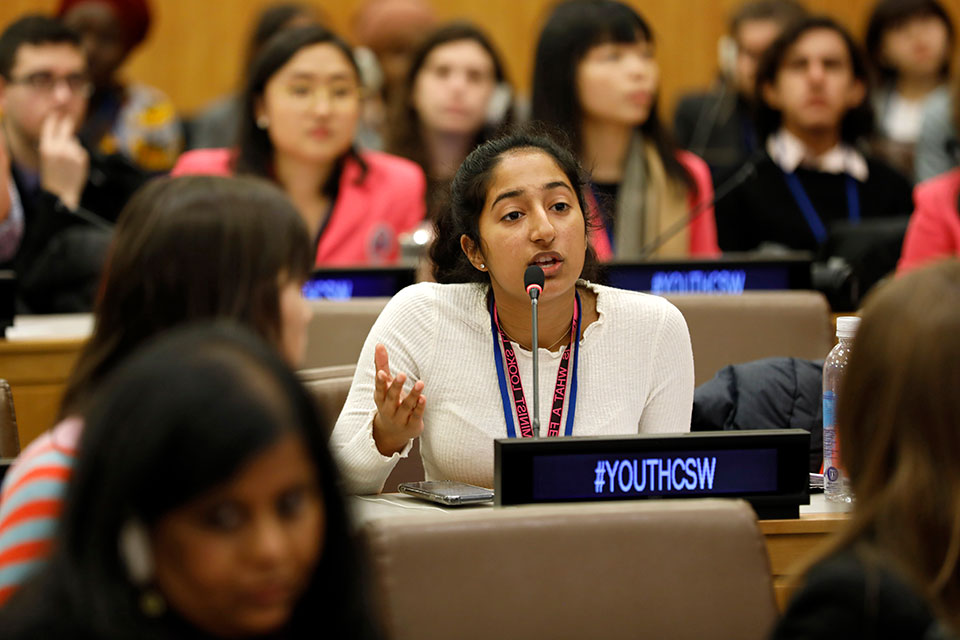 At a side event during the 63rd session of the Commission on the Status of Women, youth leaders from 100 countries urged political leaders and senior UN officials to make strong commitments that safeguard and improve access to social protection, public services and sustainable infrastructure for women and girls, including young women and girls, worldwide. Equally important, they said, was to engage young people in shaping the solutions that affect their lives.

At the “Take the Hot Seat: A High-level Intergenerational Dialogue” event, organized by UN Women, the UN Secretary-General’s Special Envoy on Youth and youth partner organizations, youth participants presented a set of “common minimum standards” that emerged from the pre-CSW Youth Forum on 9 March. They posed questions to policy makers and Heads of State on how they propose to engage youth in policy discussions, improve social protection and public services for survivors of violence, and how they can ensure youth leadership in the implementation of the Beijing Declaration and Platform for Action, which will mark its 25th anniversary in 2020.

ED @phumzileunwomen announcing that the #Beijing25 Forum in 2020, hosted by France and Mexico, will focus on youth engagement: “Right from the start, we are starting with young people”. #YouthCSW #CSW63 @franceonu @MexOnu pic.twitter.com/hOfrUkeXOv

“We are here to ensure that our voices as young people are at the centre of conversations,” said Olaoluwa Abagun, founder of Girl Pride Circle, and moderator of the intergenerational dialogue.

The “Common Minimum Standards”, generated through discussion with over 500 young people from all over the world, represent the united voice of youth in demanding young people’s access to universal, rights-based social protection, public services and gender-sensitive infrastructure.

The Common Minimum standards call for:

Geraldine Byrne Nason, Permanent Representative of Ireland and currently chairing the CSW, introduced the Common Minimum Standards during her introductory remarks to the CSW, calling on all governments to not only read them, but to bring them into policy discussions and negotiations.

“Your right is the right to challenge, and you do that in the common minimum standards, and I’m getting that message as chair,” said Ms. Byrne Nason during her turn on the “hot seat”. She encouraged youth participants to talk to their respective governments attending CSW63 and share the Minimum Standards with them before the final negotiations. “Your voice is your power,” she added.

During the Intergenerational Dialogue, youth called for concrete commitments from policy-makers on youth-related issues and the inclusion of young people in all levels of decision making.

Adriana Salvatierra, President of the Senate in Bolivia, highlighted Bolivia’s work to get more young people in politics, including by lowering the minimum age for candidates to 18 years, and the creation of political youth councils in municipalities.

“Having young people in public policy is not just an ideology,” said Ms. Salvatierra, the youngest to hold the position of President of the Senate in Bolivia. “My country understands that to build human rights and progress is a political decision.”

The policy-maker, representing Member State, UN agencies and the Commission on the Status of Women emphasized the critical importance of hearing youth voices, and pledged to make youth voices heard in decision-making.

“You are not part of the future, you are part of the present...You need to participate. You need to have your voices heard,” said Marta Lucía Ramírez, Vice President of the Republic of Colombia.

"Let it be expensive but it is an investment we have to make… if there is no space at the table, then we have to make our tables bigger… so that those voices that were not heard before can be heard now." - @jayathmadw, @UNYouthEnvoy #YouthCSW #CSW63 pic.twitter.com/8HwXWQJRxG

Ms. Carlsson also highlighted the importance of including the voices of those most marginalized and vulnerable into these discussions.

“You are the first SDG generation. I dare you to be brave, not only for yourselves, but to speak up for those who cannot be heard or seen,” she said. “You are the generation that can make sure that we are leaving no one behind”.

Jayathma Wickramanayake, United Nations Secretary-General’s Envoy on Youth, also spoke about understanding the diversity among young people, and giving space for young women and men with diverse needs and an opportunity to speak up.

“We need to have targeted investments and targeted interventions to make sure those young people that are the most marginalized are included,” said Ms. Wickramanayake. “If there is no space at the table, we have to make our tables bigger and move our chairs and create space so the voices that were not heard before can be heard now.”

With the 25th anniversary of the Beijing Declaration and Platform for Action approaching, UN Women Executive Director Phumzile Mlambo-Ngcuka emphasized the role of youth in leading the way forward in implementing the Platform.

“When we celebrate 25 years, my commitment to you is that you will be there,” said Ms. Mlambo-Ngcuka. “You will speak for yourselves. You will tell us what you want and the future you want.”

Related News
19/03/2021
At CSW65, youth leaders call for intergenerational co-leadership and accountability for the Generation Equality Forum
19/03/2018
Youth Dialogue at CSW62 presents policy recommendations for inclusion of young women and girls living in rural areas
30/06/2017
From where I stand: “Being a person with disability is challenging. Being a woman with disability adds extra challenges”
06/04/2017
From where I stand: “Technology sees skills before gender and disability”
20/03/2017
Young women call for increased women’s leadership, and change in the world of work
END_OF_DOCUMENT_TOKEN_TO_BE_REPLACED