Ask a girl who codes: What’s your message to girls who want to join ICT? 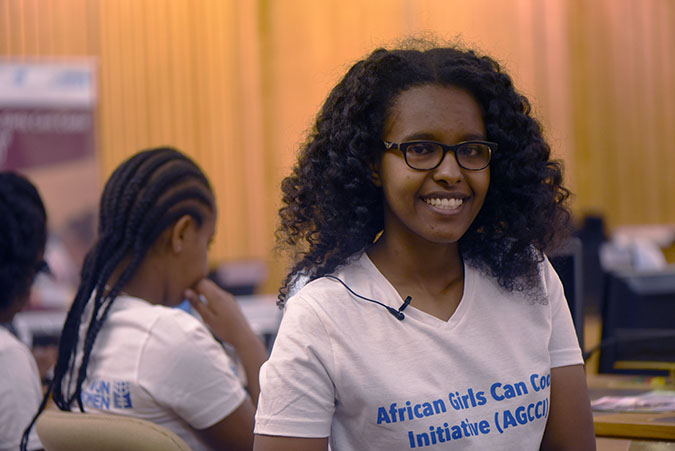 Rebecca Azanaw, 17, from Addis Ababa, Ethiopia, participated in the first coding camp as part of the joint UN Women and ITU “African Girls Can Code Initiative”, funded by the Government of Denmark. In February 2019, she and 10 other girls from the programme met with UN Secretary-General António Guterres on the sidelines of the African Union Summit in Addis Ababa, to share their experiences and ambitions. On International Girls in ICT Day, we hear from Azanaw on how she has continued to hone her skills and empowered others.

Do not be scared to try! If you really want to do it, you can… even the sky is not a limit.

I tried learning coding before I attended the coding camp organized by UN Women in Ethiopia. But I started seriously coding after the camp. The coding camp showed me anyone can code, so I believed that I could. I continued working, using Python programming skills that I had learned during the camp.

I formed an ICT club at my school that teaches coding for younger girls and we practise coding together.

When I first heard the news that I was selected to meet the UN Secretary-General, it made me look back at my experience at the coding camp. I looked back at the photos of all the girls I had met there, and that inspired me to work harder. I woke up early [the day of the meeting], I was excited and looking forward to meeting the other girls who code and were going to be in the meeting.

The Secretary-General told us the future of our countries in terms of ICT is in our hands. So we have to keep working on it!

Related News
11/02/2019
UN Secretary-General to African girl coders: It needs a movement of girls to bring more women in science and technology
05/10/2018
From where I stand: “We are trying to build a drone…to dispense medicines in rural areas”
04/10/2018
Meet the African girls who are coding to make a difference
08/10/2021
Addressing the digital gender divide in Africa through the African Girls Can Code Initiative
23/04/2019
From where I stand: “Girls have to contribute towards innovation and technology”
END_OF_DOCUMENT_TOKEN_TO_BE_REPLACED