A place of peace, reconciliation and growth 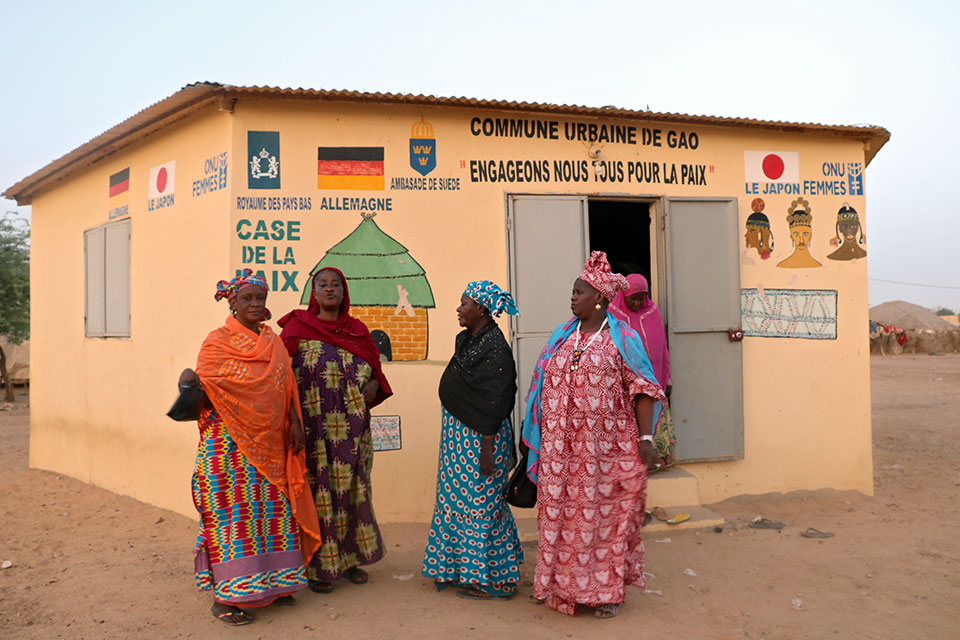 The air is dry and hot in Gao. Here, in the north of Mali, the temperatures rarely fall below 30 degrees even in colder months. Around 1 million people live in the largest northern city, who have suffered tremendously as a result of the violent conflict through 2012 and 2013 and the occupation by militant Islamist groups.

Thousands have been displaced, the economy had almost collapsed and is now recovering slowly. Much has been destroyed during the fighting—the airport, markets and public buildings—infrastructure and services that make life normal. Gao is still one of the most dangerous places in Mali.

In 2014, one year after the region was freed from the extremists, a small hut was built in Gao, surrounded by larger buildings and barely visible from the street. Anyone who passes through the driveway and enters the hut in the middle of the dusty courtyard has a specific goal: Dialogue, exchange and cohesion. Welcome to the Women Peace Hut. 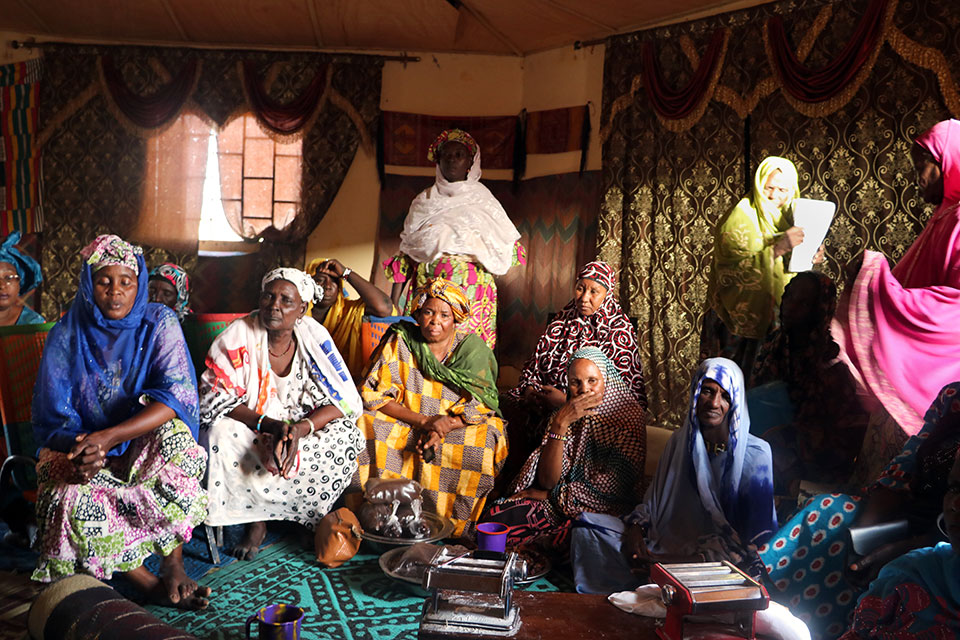 Women from all ethnic groups in Gao and the surrounding villages come together in the Peace Hut. Photo: UN Women/Sandra Kreutzer

On a Thursday afternoon, five women have gathered inside the hut and play Oware, a traditional and popular strategy game in West Africa. Soon, more women arrive, and there are 25 women sitting together in circles. They have come together to speak about their peace hut and what they have achieved.

"We have been seven women's associations in the beginning, each has about 30 to 35 members. Today, our community has grown to 65 women's associations," says Mouna Awata, the President of the Women Peace Hut. The women come from all ethnic groups living in Gao and the surrounding villages: Songrai, Bambara, Peulh and Touareg. Each association is specialized in some income-generating activity. Some of them produce leather bags and key chains; others make soap, fabrics or coffee made from date beans. "Although each association works in a different field, we all share the same destiny and we try to collaborate,” Awata adds. 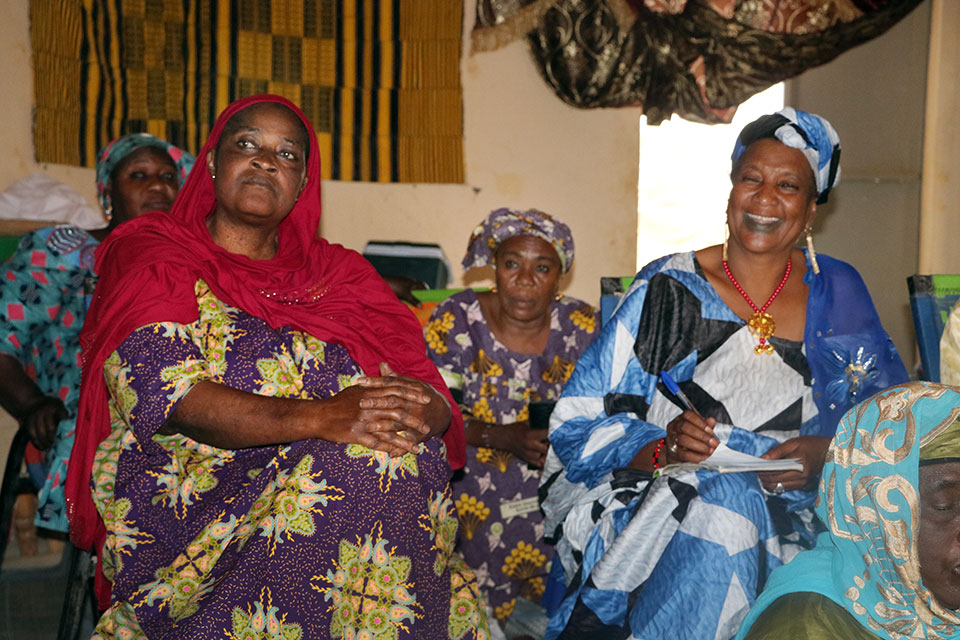 Every Thursday and Sunday, the leaders of the associations, along with the members, meet in the tiny mud hut, decorated with wall carpets, colorful sheets and photos. There, they sit and discuss hard topics such as the implementation of the peace agreement, or how to help survivors of violence against women and prevent the abuses, and how to grow their businesses to make a living. Sometimes, the women invite politicians, authorities and religious leaders to address security problems and to make their voices heard at the highest levels.

"At first, we barely knew each other. Of course, we had many discussions concerning the future and our lives. And often we did not share the same opinions. But this house was built… to get to know each other and exchange our thoughts. Today we eat, talk and even celebrate together,” said Biba Haidara, the treasurer of the Peace Hut. The sense of cohesion among the women coming from diverse ethnic groups and differing opinions is crucial for building and extending peace within their families and communities.

A hut for everyone

The Women’s Peace Hut in Gao is one of 28 sites across Mali, built by UN Women with financial support from the governments of Germany, the Netherlands, Sweden, Japan and the Peacebuilding Fund. Following the successful examples of the such Peace Huts in Liberia, the first ones were built in Mali in 2013 to give women a place where they can meet independently from their communities and families. Founded as a “meeting-place”, the Women’s Peace Hut in Gao has now become a well-known institution.

"Many people come when they have questions or need advice. Everyone knows that he or she gets help, for example, when there is a dispute in the family. Then we try to mediate between the parties. Everyone is allowed to come, even our men," Haidara explained, smiling.  And then, she told the story of how once a woman from the Songrai community denied access to a Touareg woman who wanted to join the Women Peace Hut. And how the other Songrai women asked their own sister to leave instead of the Touareg woman. “This hut is a place where everyone is welcomed, no matter what background he or she has,” she proudly reiterated.

From a place of dialogue to a driver of economic growth

Today, six years on, the peace hut in Gao has become much more than a place for peace and reconciliation. "When we opened the Women’s Peace Hut in 2014, we invited the women and trained them on leadership, management and advocacy techniques. Together with our partners from the UN Peacekeeping mission MINUSMA, USAID, Oxfam and local NGOs, we also increased their knowledge on gender-based violence and the peace agreement, which was important to build initial capacities,” shared UN Women project manager in Gao, Sekou Traoré. “Now the women are completely independent. They have built their own structures and run their own budget. Meanwhile, they are also focusing on growing their businesses and finding niches for selling their products. But the hut is fully in their own hands.” 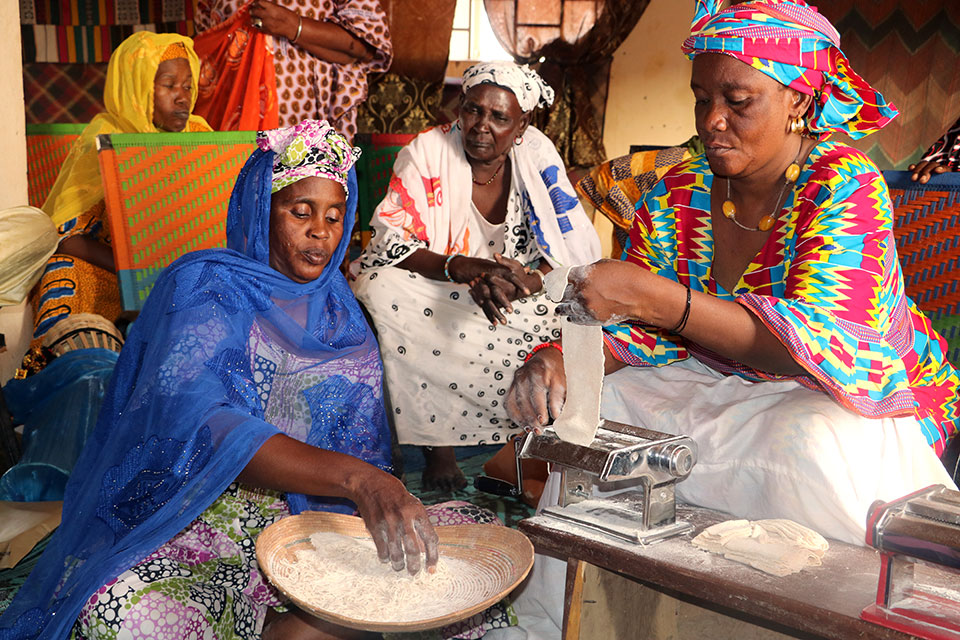 Women from Gao also learned leadership and business skills, and some now have businesses to independently to sell their products. Photo: UN Women/Sandra Kreutzer

The Peace Hut has a legal status with statues and regulations. The women opened a joint bank account, which is managed transparently. Every member can borrow money for personal needs – a benefit especially for the widows who receive less assistance from their families. Together with its partners, UN Women continues to build their capacities through training sessions on business development. Through another initiative by the Embassy of the Netherlands and UN Women, some women have sent their handcrafts to the capital, where they are being sold in local shops where they fetch more profits.

Although the women are now pulling closer together, the ongoing violence interrupts development. Due to continued attacks, they fear going to local markets to sell their products. "We cannot move freely, not in Gao, not to the South. We are almost stuck here," one woman explains. For these women, “peace” is not merely a ceasefire, but rather, peace of mind, freedom from the constant threat of violence. “When your mind is not free, your heart can never be,” another woman chimes in. “All we want is sleeping and living without fear of getting attacked or robbed.”

The women of Gao know about their influence on political decisions. "After all, it is the women who can begin a war and who can end it,” says Awata. “It is us who send our men, brothers and sons to war or keep them from leaving homes. We can achieve a lot, if we want it. But we have to stay together, and this is what we have learned here."

Next year, they want to participate more actively in the process of disarmament and promote the voluntary hand-over of weapons and arms within their communities. "The most important thing is that the violence stops”, the women concluded. “We can only develop this country in peace—and we, the women of Gao, have already found our peace."

Related News
09/10/2015
Women in Mali demand equal role in Peace Accords
14/05/2013
In the words of Saran Keïta Diakité: Girls receive a visit from a different man every night, a ‘new husband’
09/04/2013
Sahel Conference says women’s full participation essential to conflict resolution and economic recovery
05/04/2013
Media advisory: Conference on Women’s Leadership in the Sahel
05/05/2021
From where I stand: “The more Roma women are visible, the more impact they have on society as a whole”
END_OF_DOCUMENT_TOKEN_TO_BE_REPLACED