A new sport programme in Fiji is breaking gender stereotypes among students and coaches alike, as both male and female school teachers get trained as coaches. 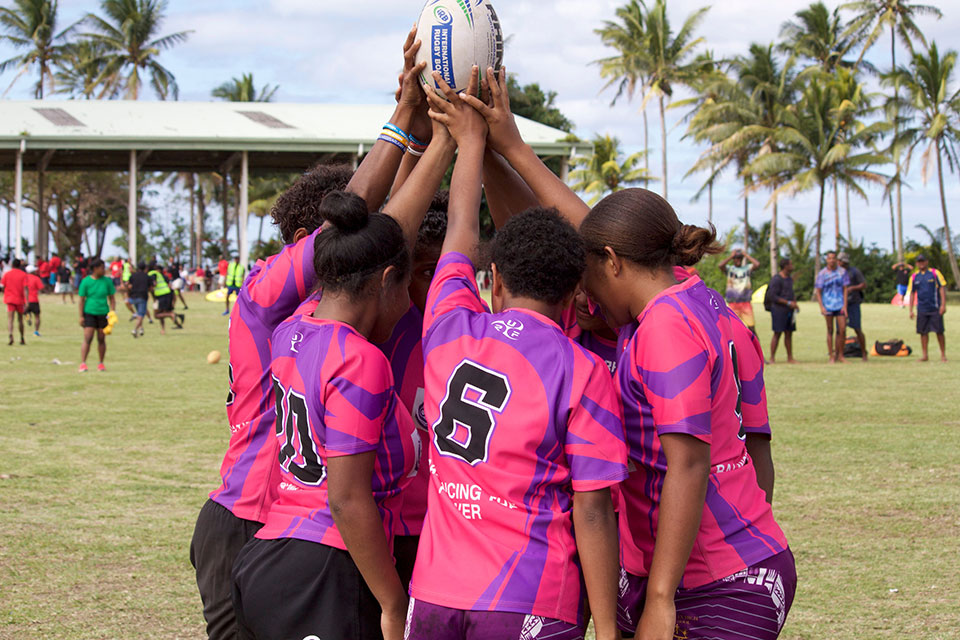 Rugby, often considered a male sport, is levelling the playing field for girls and boys, men and women in the Pacific island of Fiji.

“It’s an honour and a privilege to be a Get into Rugby PLUS coach,” says says Kitiana Kaitu, a primary school teacher from Nasinu, Fiji. She has recently qualified as coach and life skills trainer for the Get Into Rugby PLUS programme.

“I’m not just a rugby coach, but also an advocate for those who cannot voice their opinion. I love that I’m working together with others for the future of the nation,” she adds.

Sport is a powerful tool to challenge gender norms and roles, and in the Pacific region, rugby is a particularly influential sport. Kitiana Kaitu is one of the now highly skilled coaches who is learning new ways to support equal and safe rugby participation for girls and boys in Fiji . 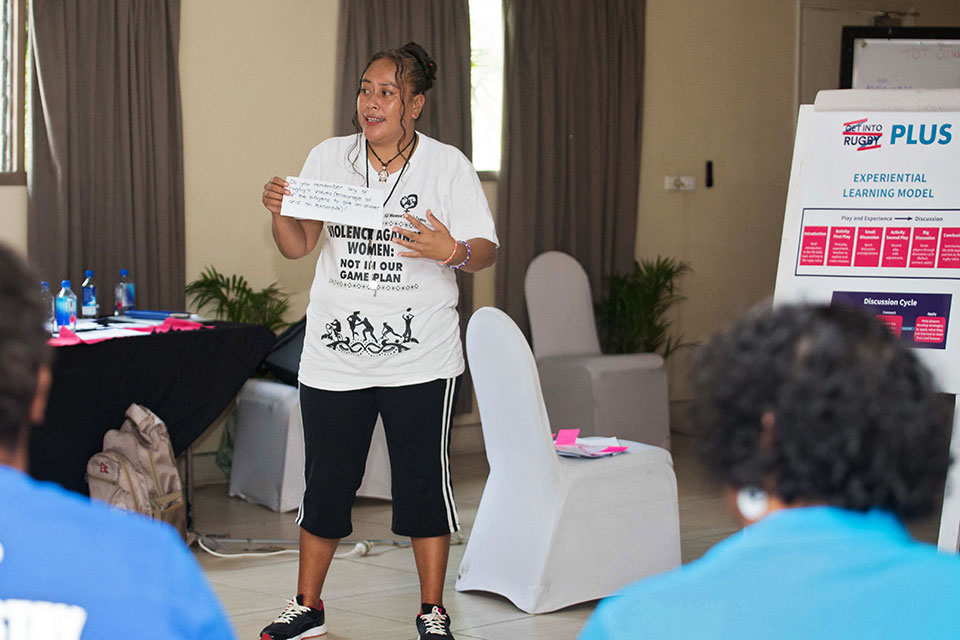 Kitiana Kaitu, known as Kiti, a primary school teacher in Nasinu, Fiji, and coach and newly qualified Lifeskills Trainer for the get Into Rugby PLUS programme. Photo: Oceania Rugby

The programme was developed for the Pacific region by UN Women in partnership with Oceania Rugby (the regional governing body for rugby unions), to promote gender equality and to prevent violence against women and girls. The European Union and Australian Government are supporting the initiative, including through the Pacific Partnership to End Violence Against Women and Girls.

The Get into Rugby PLUS programme has a special focus on developing highly skilled coaches to teach rugby and life skills to young players aged 11-14 years. The coaches support young people to develop critical thinking and reflection around issues of gender and power, and respectful relationships, all built around the rugby values of integrity, solidarity, respect, discipline and passion.

The coaches learn through a series of eight training sessions that include a range of topics including gender sensitisation, safeguarding, and ensuring the safety and well-being of all girls and boys involved in rugby clubs, programmes and activities. 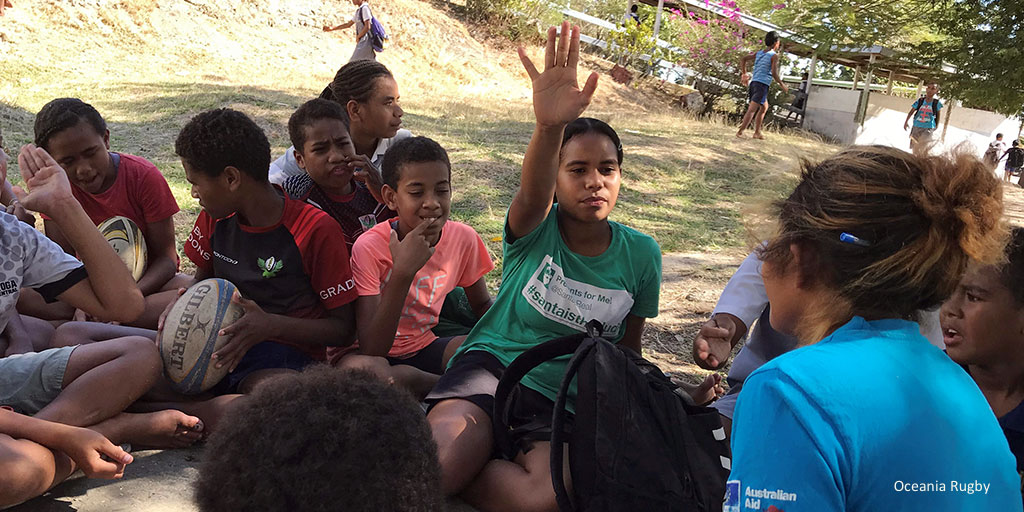 Through this unique training, the coaches also learn about human rights, how to challenge gender stereotypes, prevent violence against women and girls, and to seamlessly integrate life skills and rugby skills activities, so that both girls and boys can play rugby in a safe and inclusive environment.

“This is a long-term approach to shifting attitudes and beliefs around gender, power, violence and respectful relationships using a coach mentoring and peer-to-peer approach,” said UN Women Representative in Fiji, Sandra Bernklau. “Promoting an equal playing field in rugby for girls and boys, women and men, and opening up discussions about gender, is a key strategy to addressing equality between women and men, and preventing violence against women and girls,” she added.

School teacher and get Into Rugby PLUS coach, Neli Nabogi, is a case in point. She says: “I would recommend this programme to other people. I can share my own experience of how it has changed my life and changed the lives of the children. The programme really changed my mindset. I come from a family where I hardly had a say… I myself had the mindset that rugby was a male sport. [The programme] changed me, made me a confident woman.”

It’s about lifelong skills on and off the rugby field." 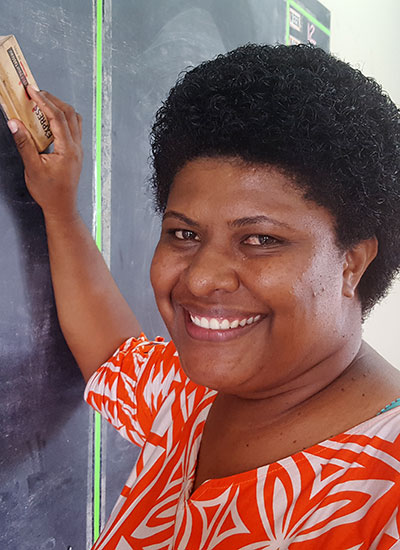 She believes that these lessons will give the children different perspectives about gender equality and the role of women and men. “It’s not just about rugby, it’s about lifelong values and skills, both on and off the rugby field”.

In addition to Get into Rugby PLUS, the regional partnership between Oceania Rugby and UN Women also facilitates women’s equal participation in community rugby events and will support a research study in Fiji, Samoa and other countries to better understand and address the connections between violence against women and girls and sport in the Pacific.

Get into Rugby PLUS training sessions for coaches on gender, gender-based violence (GBV) and human rights sensitisation, have been facilitated by the Fiji Women’s Crisis Centre (FWCC) that provides 24/7 telephone crisis counselling for women and children in Fiji at risk of any form of violence. World Rugby Level 1 Rugby Coaching and Strength and Conditioning courses are supported by Fiji Rugby Union and Oceania Rugby.The programme is co-funded by Oceania Rugby, through Rugby Australia and the Australian Government’s Pacific Sports Partnership (PSP), and by UN Women Fiji MCO, through the EUR19.5m regional Pacific Partnership to End Violence Against Women and Girls (Pacific Partnership) funded by the European Union and Australian Government with support from UN Women.

Related News
03/06/2019
From where I stand: “It’s about lifelong skills on and off the rugby field”
29/08/2014
Markets set to improve with Pacific women in the lead
19/04/2022
Interview: Taking a survivor-centred approach to protecting women migrant workers in South East Asia
06/04/2022
New global directory offers a lifeline of support for women and girls who experience violence
07/12/2021
In Cox’s Bazar, gender-responsive policing efforts build trust with Rohingya women and girls
END_OF_DOCUMENT_TOKEN_TO_BE_REPLACED