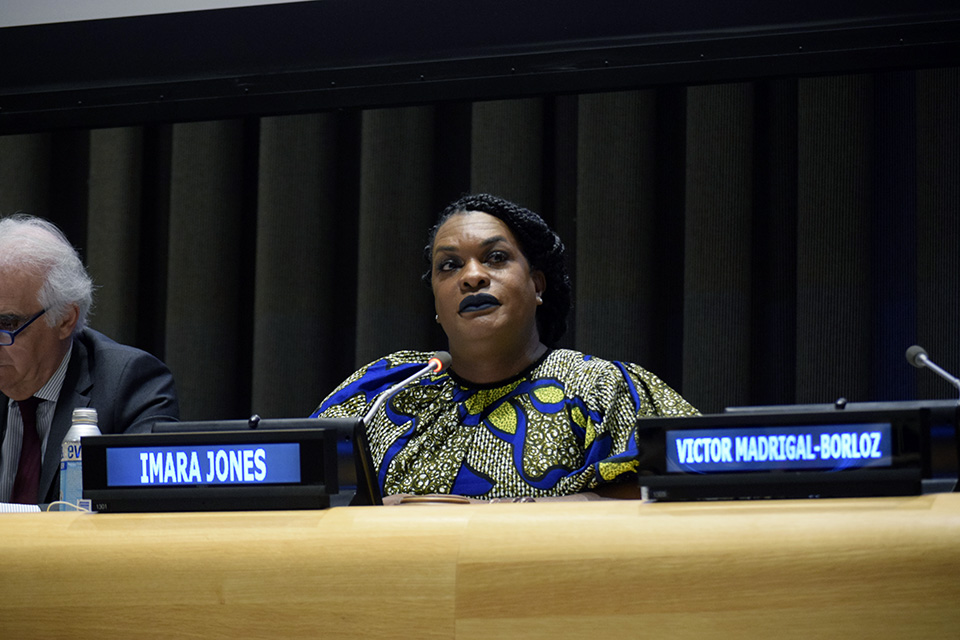 In the first ever high-level meeting on gender diversity and non-binary identities held at UN headquarters in New York, Member States, UN entities and civil society came together to discuss the current state of LGBTI rights globally.

“We are at a stage where there is tremendous, one might say unprecedented progress,” said Imara Jones, journalist and moderator of the event. “There are trans people and gender nonconforming people and gay people, and lesbian people and bisexual people who have been elected to offices around the world. There’s a tremendous amount of advance of rights, both in the global north and the global south, and of course tremendous representation in the media... But the violence and the backlash is also unprecedented and in some places in the world, historic.”

The event, hosted by UN Women, OutRight Action International, The Permanent Mission of Argentina to the United Nations, UN Globe, UN OHCHR and the Kingdom of the Netherlands, gave space to trans and gender non-conforming individuals to speak on their experiences and call for the UN and the global community to take action to protect their human rights.

Activist, multidisciplinary artist and Religion Fellow for OutRight Action International, Katlego Kai Kolanyane-Kesupile, emphasized the importance of seeing and hearing from trans and gender-diverse persons in all spaces on all issues.

“Trans people aren’t just surgery, psychoanalysis and body politic. Some of us care about the climate, some of us really care about farming, or fashion. We are whole human beings and if you don’t allow trans and gender diverse persons to really be more than the politic of you trying to figure out how and when they exist, you really cease to let them fully exist,” she said.

Geena Rocero, founder of Gender Proud, agreed about the significant impact that representation has on the community.

“I believe that dignified, nuanced and accurate representation of trans and gender diverse people, saves lives. It could save thousands, all of our lives,” Rocero said. “If you’re not getting accurate representation, you’re being dehumanized… If we’re going to use media as an advocacy tool, I want to centre the voices of the most marginalized.”

"How do we keep going forward for us to really be understood as not just, 'What is your preferred pronoun?'" - @kkolkes, @OutRightIntl Religion Fellow#BeyondBinaries pic.twitter.com/h77TNUG0vg

"This is who I am. I don't need to debate anybody about who I am." - @GeenaRocero, @GenderProud Founder #BeyondBinaries #LGBTQI pic.twitter.com/q9sEZpIpTF

UN Women Executive Director Phumzile Mlambo-Ngcuka highlighted the role of the UN and UN Women in pushing the global community for equality for all, through setting standards and calling for laws that protect women and gender-diverse people.

“The UN has a unique voice to support the human rights and fundamental freedoms of all people, especially those who may have their backs against the wall,” said Ms. Mlambo-Ngcuka. “We speak up against human rights violations everywhere, so it’s natural to us to support the LGBTI agenda… Women and people with nonbinary gender identities must have their own spaces in which to speak, to exercise power, to act, and to own and drive their own movement.”

“We all have the right to be unique and distinguishable from every other person in the world.” - @victor_madrigal, @UN Independent Expert on Protection against Violence and Discrimination based on Sexual Orientation & Gender Identity#BeyondBinaries pic.twitter.com/g9v123sRQJ

Victor Madrigal-Borloz, UN Independent Expert on Protection against Violence and Discrimination based on Sexual Orientation and Gender Identity, echoed the sentiment, and stressed the critical need to defend the human rights of gender-diverse people.

“Nobody’s life is to be determined by the circumstances in, or with which you are born,” he said. “There is no inextricable relation between particular genital configuration, and the role you play within a society. There is freedom and autonomy to be implemented in each moment of our lives.”

In addition to increased visibility and social acceptance, members of the LGBTI community also need legal recognition and protection.

“Our commitment to LGBTQI+ is also related to our law,” said Ambassador Martín García Moritán, Permanent Representative of Argentina to the United Nations. “Today is the ninth anniversary of the same-sex marriage law in 2010.”

The event was convened on the sidelines of the UN High-Level Political Forum on Sustainable Development 2019.