Take five: “This year’s Pride is marked by a critical need to not just stand but act in solidarity in seeking racial justice and equality” 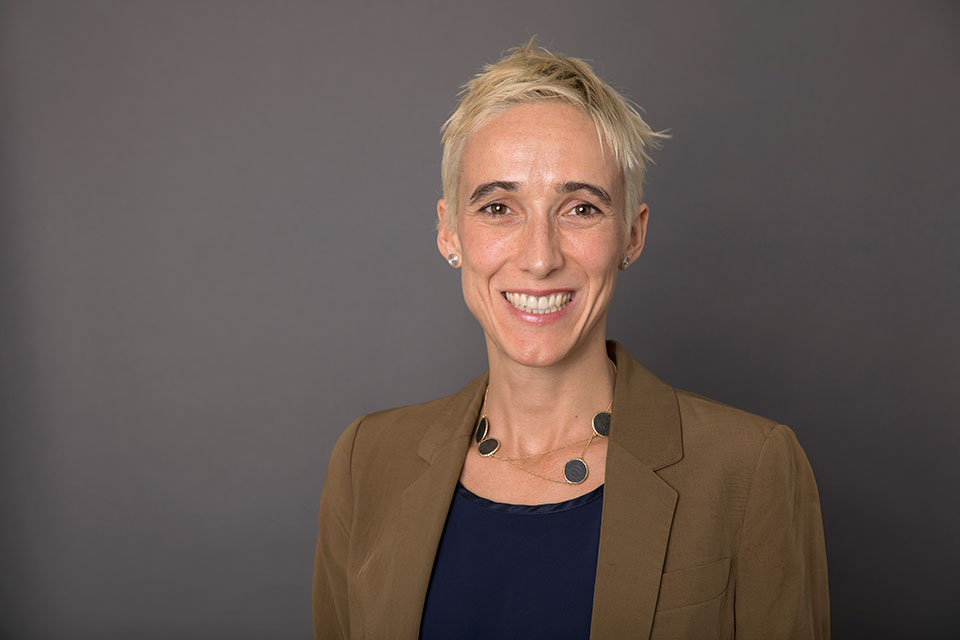 Sophie Browne (she/her; they/them) is UN Women’s recently appointed LGBTIQ+ Policy Specialist. In this newly created, dedicated post, Browne will work across the organization, globally, and with external partners to integrate an LGBTIQ+ lens to UN Women’s work. Browne has long worked on gender and social justice causes in research, policy, advocacy, law reform and programming capacities. Sophie is also on the board of UN-GLOBE, the system-wide staff body for LGBTIQ+ personnel, and co-founded UN Women’s global LGBTIQ+ staff network.

Every Pride Month is about justice and equality, but this year is exceptional. We already knew it would be, with digital preparations underway to adapt to the reality surrounding the COVID-19 pandemic. Now, we must also pay attention to the rising protests against systemic racism and police brutality, against Black people in the United States of America, but also worldwide.

It is a cause that is deeply meaningful to LGBTIQ+ movements, which are rooted in and fortified by the work of Black people, Latinx and Indigenous people and people of color.

Pride is marked in unique ways throughout the year, across the world. June marks the anniversary of when our LGBTIQ+ ancestors in the U.S. rose up against police brutality, 51 years ago, led by trans women of color, which triggered a global movement.

The LGBTIQ+ movement has made promising advances, but not with equal benefit for all of us. Progress for the LGBTIQ+ community, as a whole, is not fulfilled until our Black and brown, particularly trans, community members no longer live in constant threat of danger and discrimination.

While we express our sense of pride for who we are and how far we have come, beyond celebrations, this year’s Pride is marked by a critical need to not just stand but act in solidarity in seeking racial justice and equality.

How is UN Women working on LGBTIQ+ issues in the context of gender equality and the SDGs?

LGBTIQ+ rights are an intrinsic element of UN Women’s mandate to achieve gender equality. The SDGs, with its guiding principle of ‘leaving no one behind’, gives UN Women further impetus to develop intersectional approaches to addressing a broad spectrum of gender inequalities.

Recently, UN Women created the post of LGBTIQ+ Policy Specialist to pave the way in building UN Women’s capacity to integrate an LGBTIQ+ lens across multiple areas of work, including global programming, policy, advocacy and intergovernmental work, while also collaborating across the UN system, with civil society partners, and internally to ensure a workplace culture that reflects and houses all whom we represent.

Has COVID-19 impacted the LGBTIQ+ community differently? What can be done to respond to their needs in COVID-19 response and recovery plans?

The COVID-19 pandemic is aggravating entrenched inequalities in countless ways, with disproportionately disastrous impacts for those who are already stigmatized and discriminated against in healthcare settings, essential service provision and the wider society, namely LGBTIQ+ people. While it is promising that considerable attention has been given to the numerous negative impacts on women in general, those with diverse sexual orientations, gender identities and sex characteristics remain relatively invisible from data collection, response and recovery efforts. The first step to ensuring LGBTIQ+ needs are meaningfully integrated into plans is comprehending the extent and nature of these impacts, and the nuances of addressing LGBTIQ+ people’s needs in various cultural and country contexts, and depending on factors like immigration or economic status, for instance.

How can efforts in the UN to achieve gender equality be more inclusive of LGBTIQ+ persons and centre their needs, and why are diverse voices important in this?

It is incumbent on the UN, being the home and embodiment of the Universal Declaration of Human Rights, to be a global leader in promoting spaces and opportunities for a wide diversity of perspectives, especially of those most affected by human rights abuses.

In reality, the feminist movement spans races, sexualities and gender identities, with intersectionality as its hallmark. For the feminist principles that are instilled at the UN to be truly relevant to lesbian, bi, trans and queer women, non-binary and intersex people, not to mention women of colour, indigenous and refugee women, women living in poverty and women with disabilities, to name a few, they must be underpinned by a deep recognition of the complex ways in which oppression intersects in different people’s lives. For the UN to uphold its commitments to addressing gender and other forms of inequality and non-discrimination, it must not only speak out about or ‘empower’ but give power to this diversity of people to transform societies as well as UN spaces.

What can everyone do to be allies to the LGBTIQ+ community?

The role of allies has been crucial for amplifying the interests of the LGBTIQ+ community. As with all social justice issues, it falls on allies to not just make an appearance at celebrations, parades, rallies or on social media, but to keep showing up and instill what they learn from these movements in their attitudes and actions. It is essential for allies to sustain this sentiment by spreading this knowledge with others and consistently defend all LGBTIQ+ people’s rights.

The vast LGBTIQ+ community, with the disparate levels of power, affluence and privilege its members bring, must also look internally at how we act as allies within. Ceding ground to make space and give power to a greater diversity of faces, voices and issues is key to this.