From where I stand: “I think of my grandfather when I make Jikos”

Refika Cornoleus, escaped the war in Sudan with her her six children, but had to leave behind her home, her husband and her grandparents. She lives in Kakuma Refugee Camp in Kenya, where she makes eco-friendly stoves, which are high in demand. 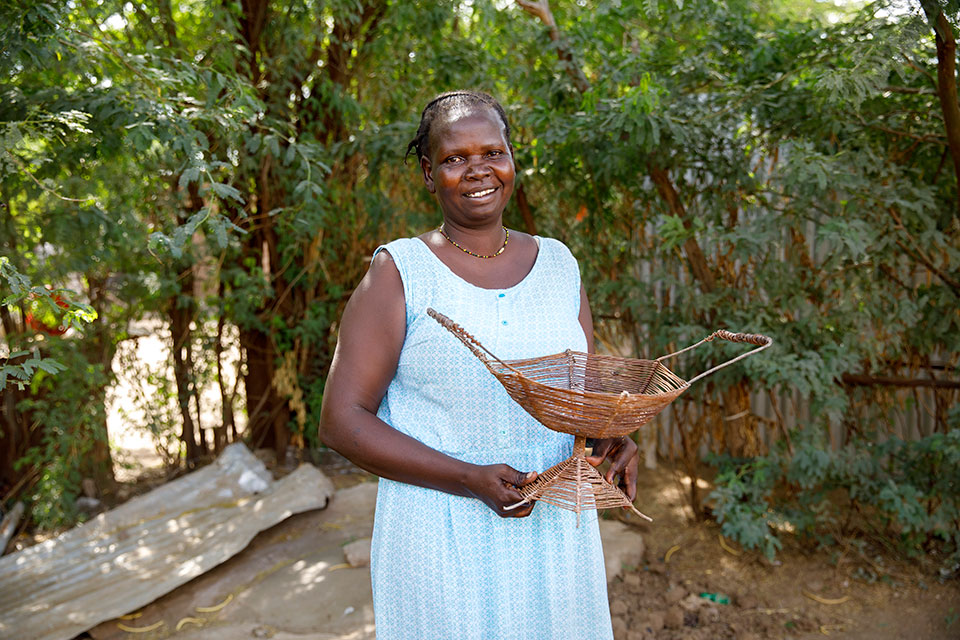 We left  Sudan in 2012, because of the war. I left with my children, leaving behind my husband, grandfather and grandmother. We traveled on foot for three weeks to reach South Sudan. From there, we paid USD 400 for a ride to Kakuma.

It was difficult when we arrived… there was no money and not enough food.  My grandfather back home had taught me how to make Jikos [handmade wire-stoves].  They disperse heat efficiently and take less charcoal. It takes me 2 – 3 hours to make one, and I can sell them for 250-500 Kenyan shillings [USD 2 - 5]. But I can only make them when I have the materials.  When my children go out to play, I will ask them to try and find some wires. I think of my grandfather when I make Jikos.

There are not many others who make stoves like these. I have taught five people in the camp to make them.  Now when people want a Jiko, they come to my home to buy them.

I wake up early in the morning, prepare breakfast for myself and the children before they go to school. My eldest daughter wants to become an IT engineer and my eldest son wants to be a doctor.  Sometimes, after they leave for school, I have time to make a Jiko, and then I go to attend classes. I am learning English, Kiswahili and Mathematics.  My favourite subject is English.

[Someday] I want to be reunited with my family in Sudan. I have met people in the camp that I knew from home, but they have not had any news about my family.”

Refika Cornoleus, 39, is a refugee from northern Sudan and a mother of six. She supports her family in the Kakuma refugee camp in Kenya by making eco-friendly stoves and with aid from UNHCHR. She longs for her husband but wakes up every day and gets to work and attends classes to improve her chances of getting a better job. The organization FilmAid filmed Cornoleus as part of a series produced to raise awareness about the resilience, voice and agency of refugee women, under a UN Women project funded by the Government of Japan.

Related News
19/08/2019
Not waiting for handouts: Five stories of resilience from one of the world’s largest refugee camps
14/10/2019
From where I stand: “My dream is to own my own garage”
11/10/2019
Climate-friendly biogas becomes ‘fashionable’ in rural Tanzania
02/03/2018
Mango farmers in Kenya get access to new technology to counter post-harvest losses
12/12/2017
Press release: UN Initiative to boost resilience of women and youth in the Sahel through climate-smart agriculture launched at One Planet Summit
END_OF_DOCUMENT_TOKEN_TO_BE_REPLACED