From where I stand: “I didn’t let myself become a victim; I used my pain to rise.”

Kaushilla Nepali advocates for the legal rights of Dalit women in Nepal, in particular enabling their access to justice, and regarding critical issues such as citizenship, domestic violence, and sexual violence. Committed to ending the entrenched discrimination against Dalit community on the basis of caste, Nepali started her journey with her own empowerment. 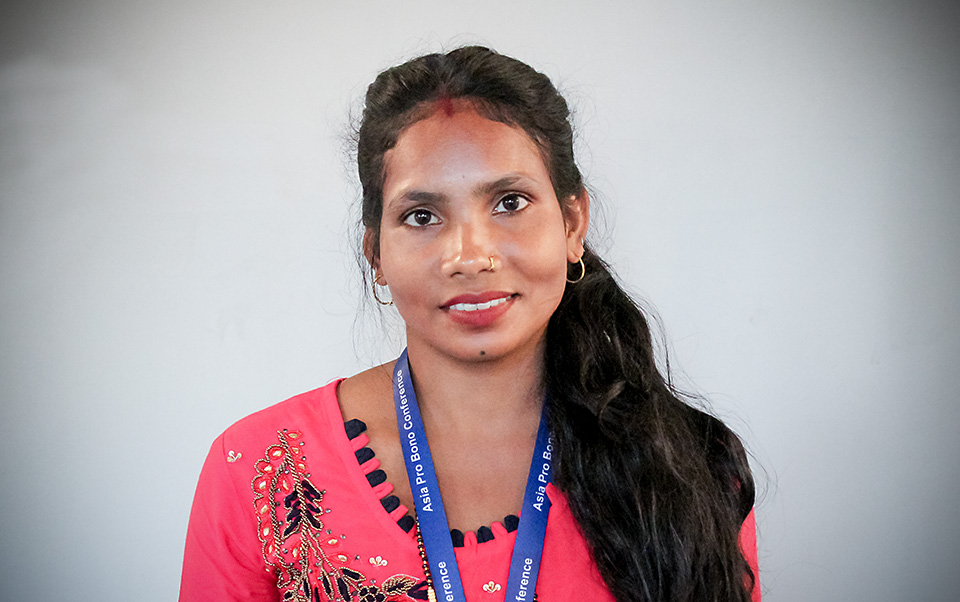 Kaushilla Nepali, 27, was one of the participants of the three-day Asia Pro Bono Conference held in Kathmandu. Photo: UN Women/Anam Abbas

Nobody can imagine the violence and pain I suffered in my life. But every instance of discrimination hit me in the opposite way. I didn’t let myself become a victim; I used the pain to rise.

When I was a child, my parents told me that I wouldn’t be able to complete my education, let alone get a job, because I was a girl and a Dalit. They sent my brother to school, while my sisters and I were made to stay at home. During those days, I used to take my brother to school and wait until he was done with his classes. A teacher noticed me and asked if I was interested in joining. After I said I was, the principal allowed me to sit in without admission. After six months of attending, I got free admission to the school and appeared for exams. In one of the exams, I scored the highest marks in the class and this motivated me to tell my parents, who didn’t know until then that I had been joining in. Initially my father was reluctant, but after some time he let me continue school since education is free for all in public schools. Several years down the line, I became the only girl from the Dalit community in my village to complete a bachelor’s degree.

When we were growing up, women and girls were told to stay in abandoned sheds while they menstruated – this practice is known as Chhaupadi. These sheds were meant for animals. They were not only unhygienic but also posed a threat to the lives of women and girls by making them vulnerable to the harsh winter, snake bites, and sexual violence. At the age of 19, I decided to destroy the shed after one of my friends was raped there. My blood boiled and my heart ached at this and I set the shed on fire. The community members cursed me for jeopardizing their cultural values and I was beaten by my family, but I felt that it was necessary to resist and speak out to break the vicious cycle of discrimination against women.

In 2016 I joined the Dalit Women’s Rights Forum Nepal and a paralegal committee in 2018, to actively engage in challenging the social discrimination prevalent in our community. Through these organizations, we have been advocating for the rights of survivors of domestic violence by filing cases in the courts and familiarizing women with the provisions of law. We have also organized free health camps in my community to provide medical treatment to women suffering from a range of reproductive health issues. Many women do not have marriage certificates because their husbands emigrated with the certificates and often simply do not return. We have provided pro bono legal support to such women to obtain replacement marriage certificates, which are required for many services and procedures.

No one recognized the struggles I faced along the way or the achievements I made while defending the rights of women in my community. Instead, some doubted if I could ever make a living doing what I do. I recently passed a test for a government job and have been shortlisted for an interview. It’s uncommon for a Dalit woman like me to get a government job. But I want to be a role model for other women and inspire them to feel hopeful about their future. I have been resilient and courageous throughout my life because I feel no one can break you if we have these qualities.”

Kaushilla Nepali was supported by UN Women within the framework of the joint UN Women, ICJ and OHCHR programme “Enhancing Access to Justice for Women in Asia and the Pacific: Bridging the gap between formal and informal systems through women’s empowerment”. The programme is generously supported by the Swedish International Development Cooperation Agency (SIDA). As part of the project, Nepali participated in the 8th Asia Pro Bono Conference in Kathmandu from September 13 to 15, along with members of 29 other grassroots women’s organizations. The three-day conference emphasized the significance of pro bono work in enhancing access to justice for women and excluded groups in Asia and across the world.

Related News
06/04/2017
Abolishing chhaupadi, breaking the stigma of menstruation in rural Nepal
01/05/2015
UN Women to address gender-based violence in the aftermath of the earthquake in Nepal
01/08/2021
Joint statement by UNFPA and UN Women: Impacts of the compounded political and health crisis on women and girls in Myanmar
16/11/2020
What happened after COVID-19 hit: Nepal
03/06/2020
UN Women and Rohingya women on the front line of COVID-19 response
END_OF_DOCUMENT_TOKEN_TO_BE_REPLACED