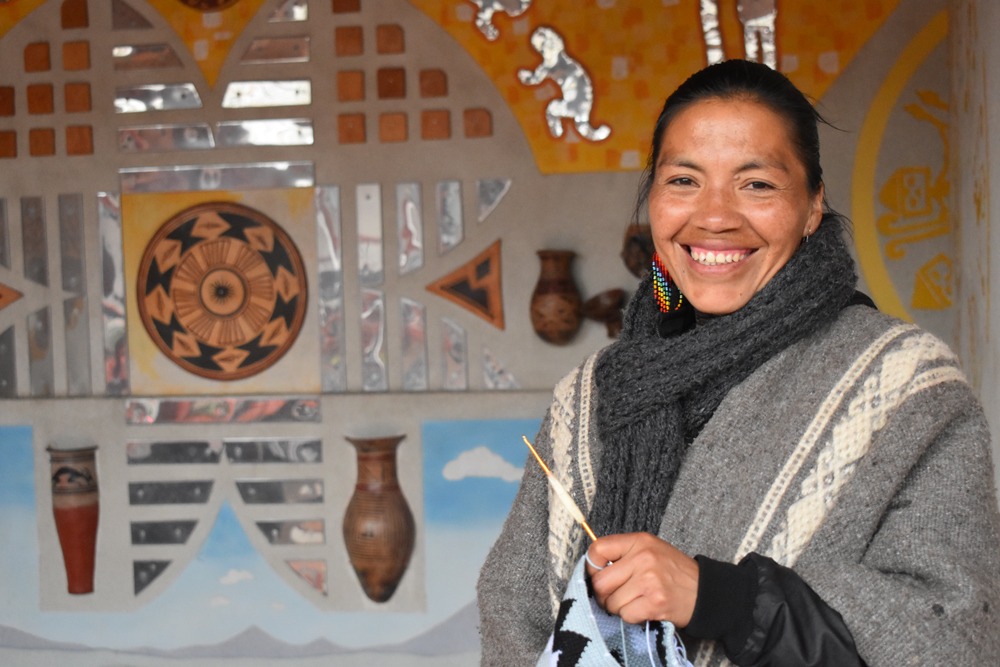 “My indigenous community is hardworking, and a place where women have taken leadership roles in the fight to recover ancestral land,” says Luz Angélica Tarapuez, from the municipality of Cumbal, in the department of Nariño, on the Colombian-Ecuadorian border.

She is among 94 indigenous women and farm workers who have attended the training school, ‘Soy Rosita, soy mujer, soy campesina, soy indígena’ [I am Rosita, I am a woman, I am a farmer, I am indigenous]. Since 2019, the training programme has been teaching indigenous women how to strengthen their leadership roles in their community and prevent gender-based violence.

As COVID-19 confinement measures started in Colombia, the country saw a rise in cases of violence against women, including those reported through hotline numbers. There was a 107 per cent increase in calls for help this year, between 25 March and 30 July, in comparison to the same period in 2019. Eighty-nine per cent of those calls were rerouted to hotlines dedicated to serve victims and survivors of violence against women.

“Taking a leadership role has not been easy. We have had to fight with men who have discriminated against us, but we have not allowed ourselves to be overshadowed. Attending the training school allowed us to learn more about our rights and the importance of speaking up about decisions that affect us as women. We have organized a Women's Roundtable to strengthen our platform,” says Tarapuez, beaming with pride.

Supported by UN Women, UNICEF and UNHCR, with funding from the Peace Building Fund, the training school is part of a project implemented by Hombres en Marcha, in Colombia and Ecuador. It is the first initiative of its kind in these border towns that is exclusively focused on addressing gender-based violence. By boosting women’s political participation, and by involving men as allies of gender equality, the initiative aims to prevent gender-based violence and establish more equitable gender norms.

The programme has made participants aware of their rights, what constitutes as violence, and taught them how to strengthen their economic, civic and political participation. As a result, in Cumbal, indigenous women have mobilized to form a Municipal Women's Board and a Local Committee on Sexual Violence and Community Action Board. Through these, they organize forums during local elections and develop proposals that shape the Municipal Development Plan. Some participants have also started thinking how they can raise their children in ways that do not perpetuate negative gender norms and stereotypes.

The pandemic has shown an increase in gender-based violence in Nariño, where 1,268 requests for information and protection were reported between the months of March and June 2020. Limited access to internet has made it even more difficult for women to access or seek support. According to data from the National Administrative Department of Statistics, only 17 per cent of homes in Nariño have internet coverage.

“Indigenous women experience sexual, psychological, physical violence on a daily basis without realizing it. This is why it’s important for women to empower themselves… we need to [be aware] of how important we are at home, on the farm, socially, economically and politically, in our communities,” says Mariana Tucanez, who lives in the municipality of Ipiales, also in Nariño.

Luz Angélica Tarapuez feels that organizing a successful women’s forum in Cumbal was one of her biggest achievements. “Now, we can leave behind a legacy of strong women that the younger generations can learn from,” she says. “We are like the water that flows and gives life, and men are like the fire that kindles. In our indigenous worldview, nobody is more and nobody is less, we complement one another, and that is why we defend gender equality.”

Tarapuez has recruited more women from the community to attend the training school. "School is important because women must be learning. It is part of life and allows us to strengthen our role in the community," she emphasizes.

The training programme has been a catalyst for mobilizing municipal administrations to support municipal development plans that target and benefit women in the communities, according to UN Women.

UN Women’s Country Representative, Ana Güezmes García, says, “this bi-national initiative serves as an example of how to mobilize local governments, the international community, the private sector and civil society, from grounds-up. When women can participate fully in their communities, it enables us to fulfill the vision of a more just, sustainable and peaceful world for all.”

The ‘Soy Rosita, soy mujer, soy campesina, soy indígena’ training school for indigenous women and farmworkers began running in 2019 in the Colombia-Ecuador border municipalities of Ipiales and Cumbal, where 94 women have received training to date. This project is the first binational and interagency initiative funded by the Peace Building Fund in Latin America. It is supported by UN Women, UNICEF and UNHCR.

Related News
15/11/2021
From where I stand: “Our territories are our futures.”
18/11/2022
Driving data-based progress on violence response and prevention in Colombia
12/10/2021
Supporting rural and Indigenous women in Argentina as gender-based violence rises during the COVID-19 pandemic
06/04/2021
Take five: Why safe transportation is vital for women and girls during the global pandemic
24/02/2021
‘Our voices are being heard’: Indigenous women in Mexico break down language barriers to respond to the COVID-19 pandemic in their communities
END_OF_DOCUMENT_TOKEN_TO_BE_REPLACED