Press release: At UN high-level meeting, world leaders reignite the vision of the Beijing Platform for Action, the most transformative agenda for advancing gender equality

Leaders make concrete commitments to accelerate the realization of gender equality as COVID-19 threatens to take a toll on gains made in the last few decades. 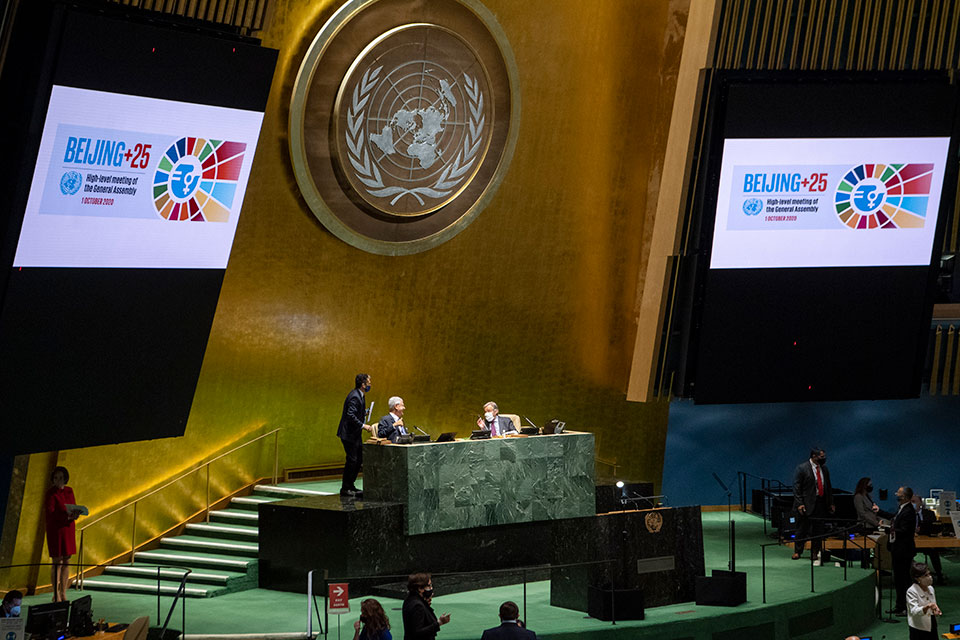 Volkan Bozkir, President of the 75th session of the United Nations General Assembly, speaks with Secretary-General António Guterres ahead of the opening of the General Assembly high-level meeting on the 25th anniversary of the Fourth World Conference on Women.Photo: UN Photo/Eskinder Debebe

The Beijing Declaration and Platform of Action is a strong call to action for the removal of systematic and structural barriers that prevent women and girls from enjoying their human rights across social, economic, political and environmental domains, and sets out a comprehensive catalogue of policy actions to achieve the vision. However, 25 years after its adoption, global leaders recognized that the redistribution of power and resources between women and men in the public and private spheres, which is inextricably tied in with the broader goals of achieving equality for all, has not been achieved. Overall, the progress made falls far short of what States committed themselves to in 1995.

In a Political Declaration adopted during the 64th session of the Commission on the Status of Women in March 2020, Member States reaffirmed their political will for action. They also recognized that new challenges have emerged and identified specific means for tackling these gaps and challenges. Some of these include eliminating all discriminatory laws; breaking down structural barriers, discriminatory social norms and gender stereotypes—including in the media; matching commitments to gender equality with adequate financing; strengthening institutions to promote gender equality; harnessing the potential of technology and innovation to improve women’s and girls’ lives; regularly collecting, analyzing and using gender statistics; and strengthening international cooperation to implement commitments to gender equality.

The report of the UN Secretary-General on the review and appraisal of the implementation of the Beijing Declaration and Platform for Action, with inputs from 173 countries, flagged that commitments have not been matched by action, investments or accountability and that an approach of addressing symptoms rather than causes has led to a state of perpetual crisis. 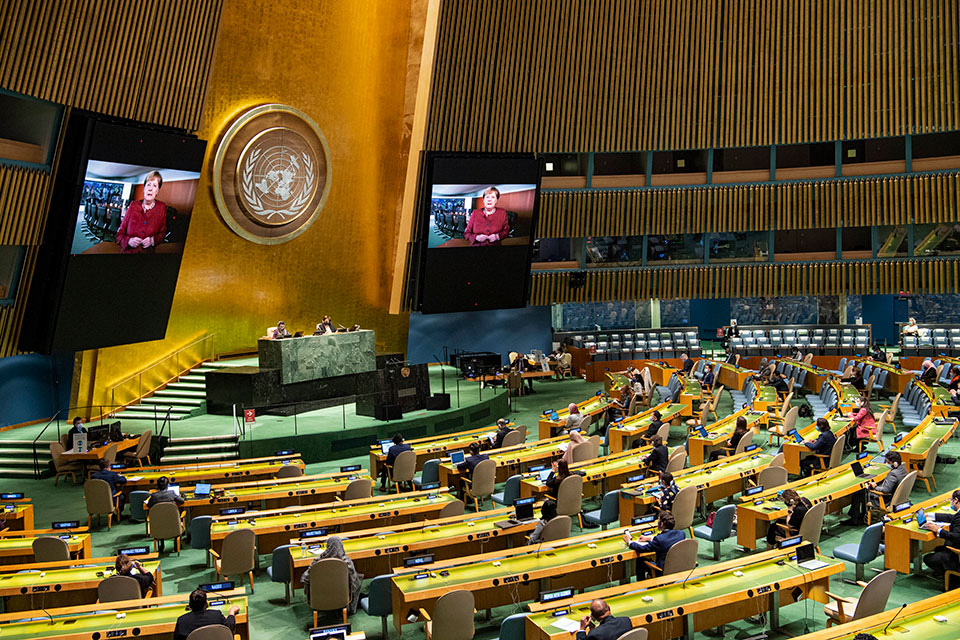 Chancellor of the Federal Republic of Germany, Angela Merkel, virtually addresses the General Assembly high-level meeting on the 25th anniversary of the Fourth World Conference on Women.Photo: UN Photo/Rick Bajornas

In addition, the far-reaching social and economic impacts of the COVID-19 pandemic are disproportionately affecting women around the world, from a significant rise in violence against women, including domestic violence, to women’s disadvantage in labour markets, carrying the bulk of unpaid care and domestic work and an estimated increase of 9.1 per cent of the poverty rate for women. It is estimated that due to the pandemic, in 2021, 47 million additional women and girls will be pushed into extreme poverty, bringing the total to 435 million. The consequences of the pandemic threaten to undo decades of progress and many of the hard-won advances.

During the event, leaders recommitted to turn the Beijing Declaration and Platform for Action into a lived reality for all women and girls. Towards this end, they will accelerate action towards achieving Sustainable Development Goal 5 on gender equality. They will also work for further implementation of Security Council resolution 1325 on women and peace and security; the Convention on the Elimination of All Forms of Discrimination against Women, the Maputo Protocol, the Istanbul Convention and other instruments and treaties. Participants in the Action Coalitions of the Generation Equality Forum will take concrete steps for realizing measurable results.

Work done so far across a broad range of areas is now a stepping stone for further progress. Actions will be taken to tackle all forms of violence against all women and girls, to mitigate the impact of climate change and achieve gender parity in public and political life, including in parliaments and in countries and societies around the world. This will include implementation of social protection measures, wage subsidies and care services to counter the gender-specific impacts of the COVID-19 pandemic, enhancing land ownership/rights, equal pay measures, and support for women in the informal economy and women entrepreneurs. Enhanced collaboration with civil society to create safe spaces for women and girls to exercise their voice and leadership and ensure enjoyment of their human rights is also needed.

While the current COVID-19 pandemic created new challenges, leaders committed to seizing the opportunity for transformative change, keeping focused on closing the gender digital divide to ensure that women and girls can contribute to, and benefit from technology and innovation.

“In 1995, the nations of the world adopted the Beijing Declaration and Platform for Action. The most comprehensive and transformative global agenda, for the achievement of gender equality. No doubt, we have made significant progress. Yet no country can claim to have achieved gender parity, and the current crisis threatens to erode hard-earned gains,” said President of the 75th Session of the United Nations General Assembly Volkan Bozkir. “Today’s discussion has shown that, we have a long way to go. But it has also shown that, we are committed to accelerating the realization of gender equality,” the President of the General Assembly added. 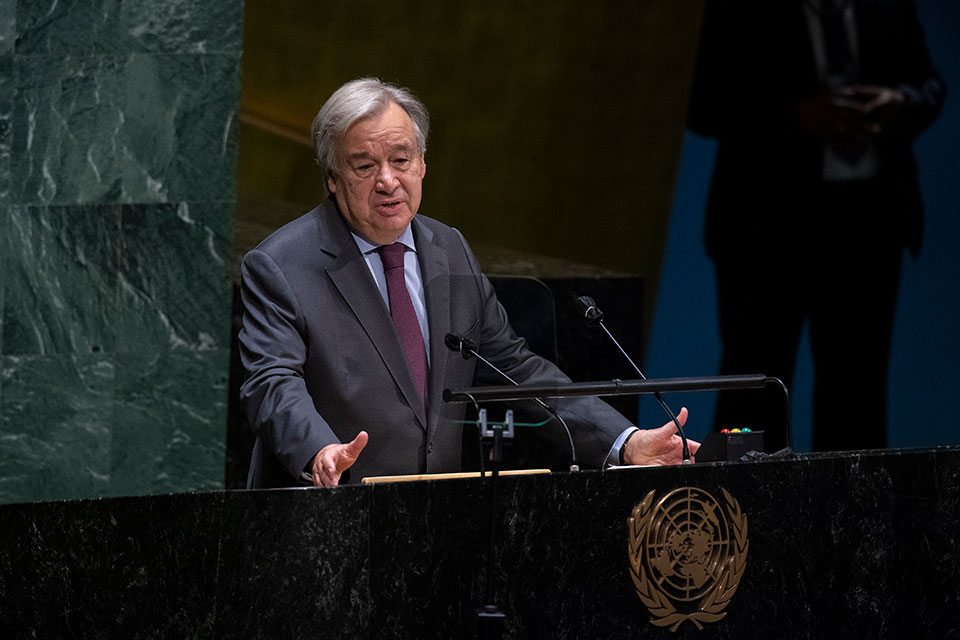 In the opening segment of the High-Level meeting, Secretary-General António Guterres called for a strong push to meet the unfulfilled promise of the Beijing Platform for Action. “It starts with the equal representation of women in leadership positions, in governments, boardrooms, in climate negotiations and at the peace table – everywhere decisions are taken that affect people’s lives.” He added: “Achieving this will require targeted measures including affirmative action and quotas. This is a human rights issue and a social and economic imperative”.

Building on the foundation laid by the government representatives and more than 30,000 civil society representatives who attended the Fourth World Conference on Women and its NGO Forum in Huairou, China, is imperative to build back better after the pandemic. This means bringing women to the centre of decision-making, and putting in place the structural changes that intentionally enable this.

UN Women called for actions to change the course of history for women and girls, through bold leadership, unwavering political will and urgent investment, especially in women’s organizations, women’s ministries and agencies and with young feminists leading change.

“This is the time for disrupters, young and old”, said UN Women Executive Director Phumzile Mlambo-Ngcuka. “Women are calling for a leapfrog to 50 per cent representation, or parity in all spheres, including cabinets, corporate boards and throughout the economy, including women as beneficiaries of COVID-19 fiscal stimulus packages, engagement in all peace processes, and closing the digital divide,” she said. “We need big bold steps not incremental ones. The women of the world believe in the UN and the solidarity of nations. And that ‘we the peoples’ all together, can change the future,” the UN Women Executive Director added.

Xi Jinping, President of the People’s Republic of China, host country of the Beijing Conference, called for protections of women´s rights and interests to become a national commitment and announced a USD 10 million contribution to UN Women in the next five years.

The UN Decade for Action to deliver the Sustainable Development Goals is the world’s chance to transform the lives of current and future generations of women and girls. In support of the UN Decade of Action, UN Women has launched six Action Coalitions, which are global, innovative, multi-stakeholder partnerships to mobilize governments, civil society, youth-led organizations, UN agencies and the private sector to catalyze collective action and drive increased investments to deliver concrete, game-changing results to advance gender equality. The Action Coalitions will be presented at the Generation Equality Forum, a civil society–centred, global gathering for gender equality, convened by UN Women and co-hosted by the Governments of Mexico and France, in partnership with civil society. In his remarks Emmanuel Macron, President of France, announced the new timeline for the Forum to take place in June 2021 in Paris, France. The Forum will present a vital moment for activism, feminist solidarity, and youth leadership to achieve transformative change.

Office of the President of the General Assembly: Denise Kling, denise.kling@un.org

Related News
25/01/2021
Action Coalition Leaders on Technology and Innovation unite and call for bold, collective solutions to spark a gender-diverse digital reset
18/01/2021
Comic and cartoon competition
GENERATION EQUALITY: PICTURE IT!
31/12/2020
Ana Šaćipović: Building a bridge between two worlds
05/10/2020
Press release: 25 years after a landmark global agreement, the numbers still don’t add up for women in Europe and Central Asia
01/10/2020
Statement by Phumzile Mlambo-Ngcuka, UN Under-Secretary-General and Executive Director of UN Women, on the occasion of the High-Level Meeting on the 25th anniversary of the Fourth World Conference on Women, 1 October 2020
END_OF_DOCUMENT_TOKEN_TO_BE_REPLACED