Take Five: “Women leaders around the world have demonstrated successful management of the pandemic”

Around the world, women are shining through as outstanding leaders as the COVID-19 pandemic escalates. From Germany to New Zealand and Denmark to Iceland, women leaders have shown clarity in their decisions and policies, they are compassionate, empathetic, strong communicators and they show solidarity. Her Excellency Vjosa Osmani, the first woman assembly president in Kosovo, has been praised for her professionalism in leading the assembly during the crisis. She is a Doctor of Legal Sciences, former professor and mother of two girls. 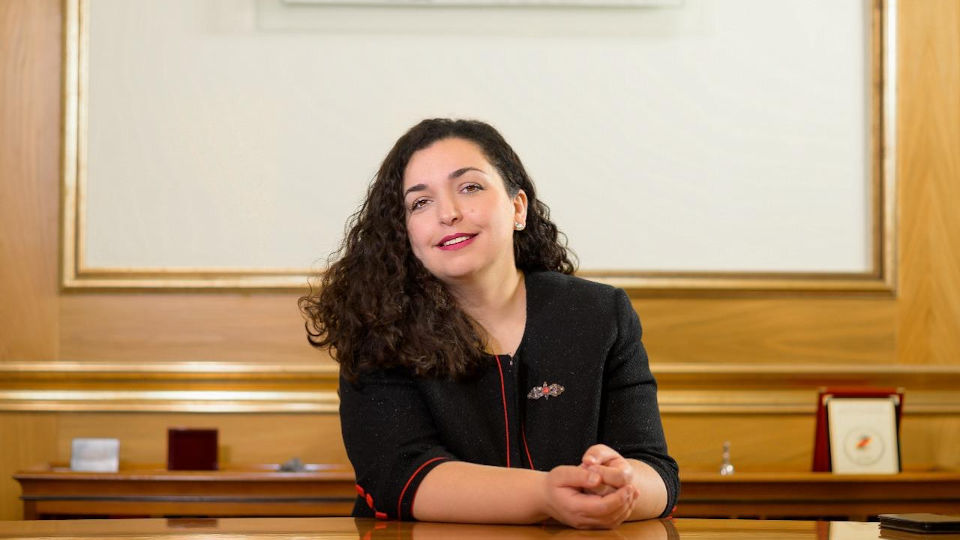 Her Excellency Vjosa Osmani is a Doctor of Legal Sciences, former professor and mother of two girls. Photo: Office of the Assembly President

Why is it important to increase women in leadership and of having women representatives in Kosovo’s[1] political setting?

When women participate in high-ranking political and state level circles they contribute to more balanced, gender-sensitive, environmentally considerate and forward-looking policies. It is only through such a policymaking approach that we stand a chance in meeting the Sustainable Development Goals and in making this a genuine #DecadeOfAction and a #GenerationEquality.

What does it mean to be a woman in a position of leadership during the COVID-19 pandemic?

Women leaders around the world have demonstrated successful management of the pandemic. They have been able to unify the public and to engage people on the importance of changing their everyday behaviours to help contain the virus’ spread and to flatten the curve. Although the burden of the pandemic falls heavily on everyone, there are several aspects that require a specific gender-centred approach, such as securing safe childbirth and controlling maternal mortality; the impact of school closure on women as primary caretakers; and its connection to workplace activities. In my capacity as assembly president, I am advocating for a continuous gender-sensitive approach so that women are given a sustained and long term equal treatment.

As the president of the assembly, how have you been advocating to protect the rights of women and to mitigate the disproportionate impact of the pandemic?

During the pandemic, women in Kosovo have been exposed to serious social risks and high levels of vulnerability, as demonstrated by the rise in domestic violence cases since lockdown measures were introduced. I am consistently raising my voice about the pandemic’s gender dimensions, sharing relevant facts and information, while closely monitoring all government actions. In partnership with various organizations and initiatives, I have endeavoured to raise awareness about the pandemic’s implications for women and girls. I joined the UN Women Kosovo campaign against domestic violence and worked closely with UNICEF on issues related to children’s health and the wellbeing of families.

What role should men play when it comes to supporting women in politics?

A limited number of women hold leadership positions globally and the same applies to Kosovo.. Social productivity cannot be reached while people are marginalized, discriminated and face gender-based barriers. We, men and women, need to contribute to including more women in decision-making processes and to raise their representation in leadership positions. It is imperative to tackle the male-dominant culture that we cultivate at home from early ages. It is also our responsibility to raise our children free of stigmas and of traditional gender roles.

How would you encourage women’s social and political leadership and contribute to greater awareness that they are able to occupy decision-making positions?

There are great examples of women in leadership positions and doing extraordinary work during the COVID-19 pandemic, in Kosovo and around the world. These illustrate why women should occupy more decision-making positions. Affirmative actions have helped Kosovo move towards equality in politics, but it is the competence that we have demonstrated which will drive a higher presence of women in leadership positions as an integral and sustainable part of our society. By building each other up, we will lift our societies to a better level of collective wellbeing.

Related News
10/03/2021
This is what leadership looks like: Meet Elena Crasmari, the only woman in her local council in Moldova
09/03/2021
This is what leadership looks like: How three women mayors in Moldova are making a difference every day
20/05/2020
Women survivors of violence receive vital support from shelters in Kosovo during the pandemic
20/09/2022
Press release: New Platform of Women Leaders meets at UN General Assembly
01/08/2021
Joint statement by UNFPA and UN Women: Impacts of the compounded political and health crisis on women and girls in Myanmar
END_OF_DOCUMENT_TOKEN_TO_BE_REPLACED