In Nepal, a woman-managed quarantine centre tends to women’s unique needs and recovery 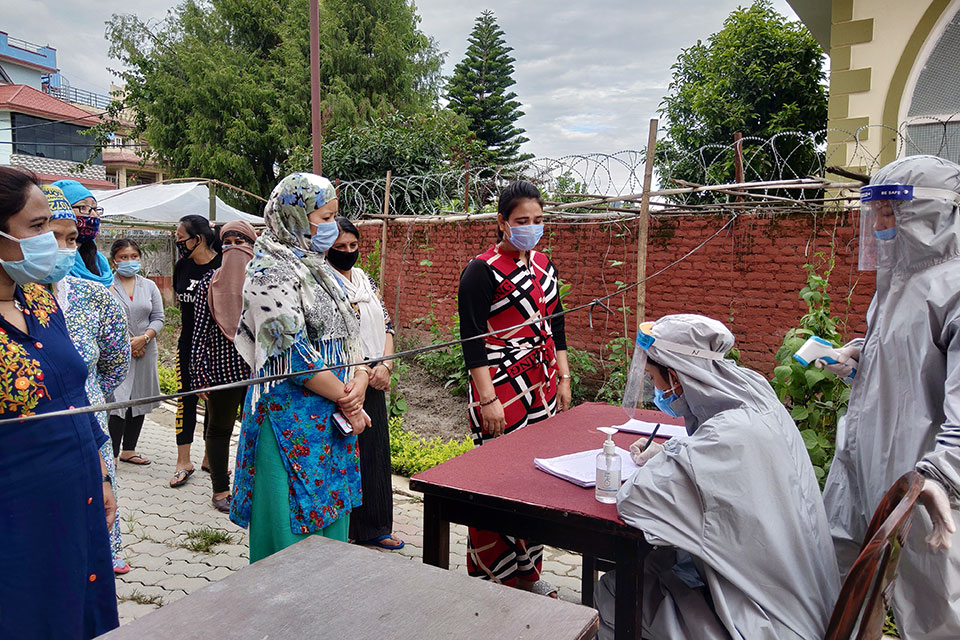 Mithu Tamang waits in a queue to get her temperature checked by staff at WHR's women-managed quarantine facility. Photo: UN Women/Ashma Shrestha

Across the globe, many migrants have been waiting to reunite with their families in the wake of the COVID-19 pandemic and travel restrictions to prevent its spread.

Mithu Tamang, 30, was among more than 300 fellow Nepali migrants stuck in Kuwait for over two months before a chartered flight was arranged to bring them home on 11 June. It was the first flight to land since the national lockdown on 24 March 2020.

The returnees were sent to government-managed quarantine centres across the country. Tamang considers herself lucky to be one of the 47 women placed at a quarantine centre set up by Women for Human Rights (WHR), a national women’s rights organization, in collaboration with the Government of Nepal. UN Women provides personal protective equipment (such as masks, gloves and sanitizers) as well as food supplies for the quarantined residents.

“We are all very happy to be here, as we feel safe,” says Tamang. “All the staff are female and that makes us feel comfortable.”

The Founder of Women for Human Rights, Lily Thapa, said the organization has offered up its office space in 21 districts as quarantine centres. As a starting point, their office in Budanilkantha, Kathmandu, has been transformed into a quarantine centre.

The centre is fully managed by women. Women for Human Rights provides dignity kits to the residents of the quarantine centre, through an initiative supported by UNFPA. They also facilitate access to women’s shelter for those who are unable to return home.

As the returnee migrants wait to return to their homes and communities, they also fear stigmatization.

On 16 June, a delegation composed of Julliand, Under-Secretary of Nepal’s Ministry of Women, Children and Senior Citizens Sita Niraula, and UN Women Representative Wenny Kusuma, visited the quarantine centres. There, a number of women shared their concerns.

“My sons live in a rented place in Kathmandu and their landlord and neighbours have told them not to bring me home,” shared Chandramaya Basnet.

With increasing numbers of COVID-19 infections among returnee migrants, stigma and discrimination against this group runs high. In addition to the stigma, they see a bleak economic future.

“We need employment opportunities and interest-free loans to start our enterprises,” said Tamang.

Responding to this demand, Under-Secretary Niraula said the Government is introducing employment programmes, for which she advised the women to register their skillsets in their respective ward offices.

Tamang and the other returnee migrants were granted amnesty by the Kuwaiti Government for either overstaying their visas or staying there undocumented. “I had been staying illegally in Kuwait for the past five months after the host family with which I was working as domestic help refused to renew my visa,” says Tamang. “I have been working abroad since 2012. To escape domestic violence and raise my sons, I left [Nepal] in the hope of making a living. Although life in a foreign land is difficult, we were at least able to earn decent wages and pay for our children’s education in a private school.”

Tamang isn’t sure where she’ll go after completing the quarantine. However, she hopes to be able to create a livelihood for herself, if she gets some support. “I have sewing skills and if the Government provides interest-free loans, I might be able to establish something here.”

“Most women say that if they could, they would remain in Nepal; they would not choose to work abroad. Why would they leave loved ones, including their children, and live as domestic workers at risk of rape and harassment in their emplioyers’ homes, unless they felt they had no other option,” said UN Women Representative Wenny Kusuma,, reflecting on her interaction with women in the quarantine centre. “Plans for the socio-economic recovery of Nepal need to recognize women migrant workers as a central concern. The United Nations, wants to partner with the Government to ensure that women returnees have a future of viable options.”

UN Resident Coordinator Valerie Julliand drew attention to the rising accounts of gender-based violence during COVID-19 and specific economic vulnerabilities faced by women across the country. “Gender-based violence is pronounced and needs attention. Legal migration, livelihood and employment opportunities are crucial. We must take these factors into account when we plan socioeconomic recovery,” she stressed.

Related News
01/10/2021
Comprehensive relief package provides support to women and excluded groups during the COVID-19 pandemic in Nepal
10/05/2016
Getting back on her feet again in Nepal
24/09/2015
Working to stem the tide of post-earthquake migration in Nepal
07/10/2021
From where I stand: Learning sessions gave me the courage to aim for a career as a police officer and end illegal behaviour against women
19/08/2021
Women-managed community kitchens support vulnerable women in Nepal
END_OF_DOCUMENT_TOKEN_TO_BE_REPLACED