While humanitarian action in Beirut is in full swing after the two explosions that hit the city on 4 August, killing hundreds and displacing more than 300,000 people, even as COVID-19 cases rise, Lebanese youth have taken to the streets, masks on, providing food and assistance to those in need. 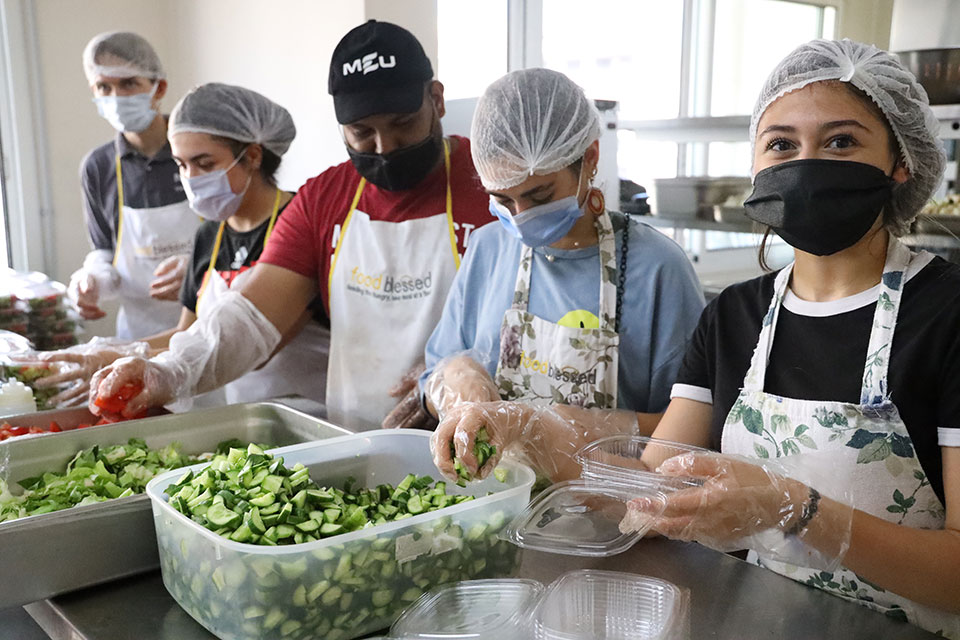 Lama Najdi is still shaken by what she saw in the immediate aftermath of the Beirut blasts – bloody hand prints on the walls of a damaged building and complete devastation of life as she knew. Fortunately, on the afternoon of 4 August, she was in a neighbourhood further away from the port, where the explosions occurred.

The 17-year-old high school graduate is now volunteering with a hunger-relief organization, FoodBlessed. Working with others, she cooks 400 hot meals every day, which are handed out to those areas affected by the blasts. “The explosion has opened my eyes…giving back to my community is fulfilling and important to me,” says Najdi. 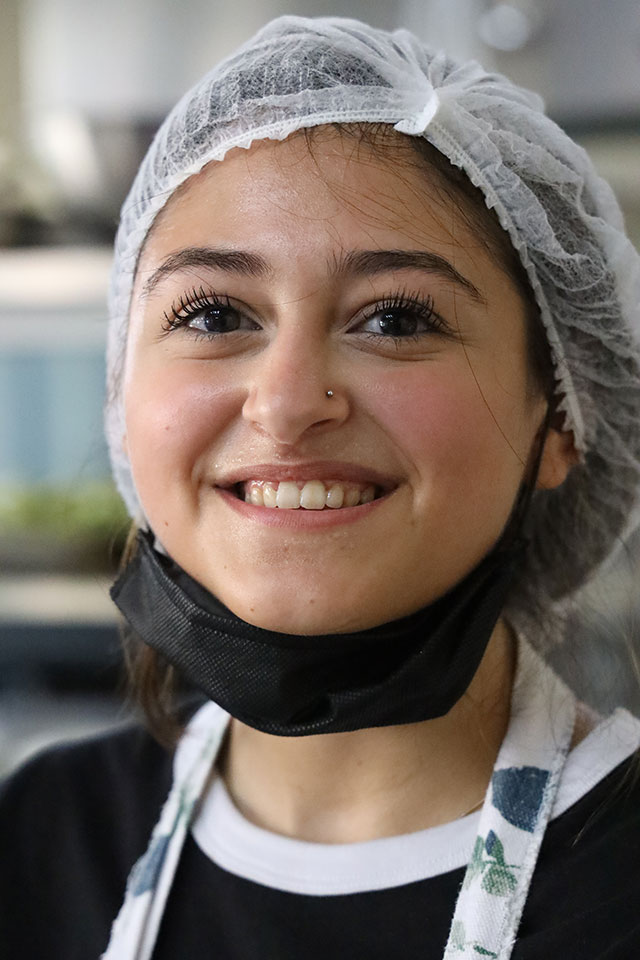 Lama Najdi is one of the many young people who have volunteered to cook meals for families affected by the Beirut explosions. Photo: Dar Al-Musawir/Ramzi Haidar for UN Women

She is part of a group of 15 young women volunteers working in Sin El Fil, Beirut, and they are joined by 15 young men, who are also cooking, defying rigid gender roles and stereotypes.

Maya Terro, the co-founder and Executive Director of FoodBlessed, is surprised by the high number of male volunteers engaged in what is still considered as “women's job” in Lebanon – such as cooking and cleaning. “We have male volunteers who have never before chopped tomatoes or been in the kitchen, but they have volunteered to learn and cook for the families affected by the crisis,” she shares.

In Sin El Fil, Beirut, a catering kitchen called “Shou Tabkha Mom?” (What is mom cooking?) has offered its premises seven days a week to FoodBlessed to prepare meals for the families displaced or affected by the explosions.

Maysa Karnib, 16 years old, has also been volunteering every day since the blasts. She helps in community cleanup efforts, in cooking, packaging and distributing food parcels. She was at her home in a suburb of Beirut, about 9.9 km (6.15 miles) from the port. “The whole apartment was shaking, and dust was pouring down the ceiling. It was absolutely terrifying,” she recalls.

Immediately after the blasts, she helped to clean up the affected homes. “There were pictures, love letters, college applications, homework papers, electricity bills… all things that reminded us that people lived a normal life here.”

But life is anything but normal now in Beirut. The explosions have killed more than 180 people, and injured more than 6,000 people. Some 300,000 people have lost their homes. Prior to the explosions, Lebanon’s health system was already under strain because of rising cases of COVID-19. The blasts closed 3 major hospitals and over 50 per cent of the city’s health care centres were assessed to be non-functional, as the city goes under mandatory lockdown because of rising cases of COVID-19.

However, the crisis is also bringing people together, and igniting a sense of purpose and civic responsibility among the youth. Karnib thinks social media has been key in bringing young people out to help. Relief efforts and petitions have been largely coordinated on social media, and discussions are being hosted to raise awareness about what’s going on in communities.

Even those who have survived the crisis but suffered losses, are diving in to help. Rita Al Halabi, 19, was 2.5 km away from the Beirut Port when the blast shook the city. She was in a car with her sister when her ears popped and she saw the city crumble. Her father’s carpet store is mostly a pile of debris now, but she is thankful that he was not in the shop during the explosion. Traumatized, but determined to help others, Al Halabi is also volunteering to cook meals with FoodBlessed. She had just finished her first year in Hospitality Management and was getting ready to start a job in a kitchen in Gemmayze. The August blast has destroyed the restaurant.

For Rachel Dore-Weeks, UN Women’s representative in Lebanon, it is important to ensure that relief and recovery efforts in Beirut not only address the unique vulnerabilities and needs of women and girls but boost their leadership and contribution. “Women – young women – are on the streets, rebuilding Beirut right now. This volunteerism demonstrates incredible civic engagement and commitment, and as Beirut rebuilds, this must be acknowledged and women must be supported to take on leadership roles in the reconstruction process.”

UN Women is joined by UN and civil society partners in supporting relief efforts, preparing safety audits in neighbourhoods and deploying mobile teams to provide psychosocial support. As a close partner to UN Women, UNFPA has been fully engaged in the aftermath of the Beirut explosion response through providing life-saving interventions to pregnant women and those in reproductive age; facilitating access to mental health and psychosocial support; reducing the risks of gender-based violence among the affected communities; and distributing thousands of “dignity kits” (with essential products) to women through its youth peer educators’ network. “Our mandate is so unique as it aims at investing in young people's potential – especially young women – and that is paying off with this amazing mass of engaged, remarkable, caring and responsible youth who will shape a better future for themselves and for their nation,” says Asma Kurdahi, Head of UNFPA Office in Lebanon.

Learn more about about UNFPA and UN Women’s work in Lebanon in the aftermath of the Beirut blasts.

Related News
26/10/2020
Two months on, Beirut’s elderly women are still reeling from the blast
05/10/2020
After the Beirut blasts, Lebanon urgently needs medical and mental health care
09/09/2020
Op-ed: A month after the blast, let's rebuild Beirut as the Arab region's first feminist city
13/08/2020
UN Women and partners provide immediate relief to women and girls impacted by the Beirut blasts
17/06/2021
I am Generation Equality: Souhaila Nassar, changing the image of refugees
END_OF_DOCUMENT_TOKEN_TO_BE_REPLACED