Reeling from deep economic crisis, COVID-19, and now the blasts, Lebanon needs women at the centre of recovery plans. 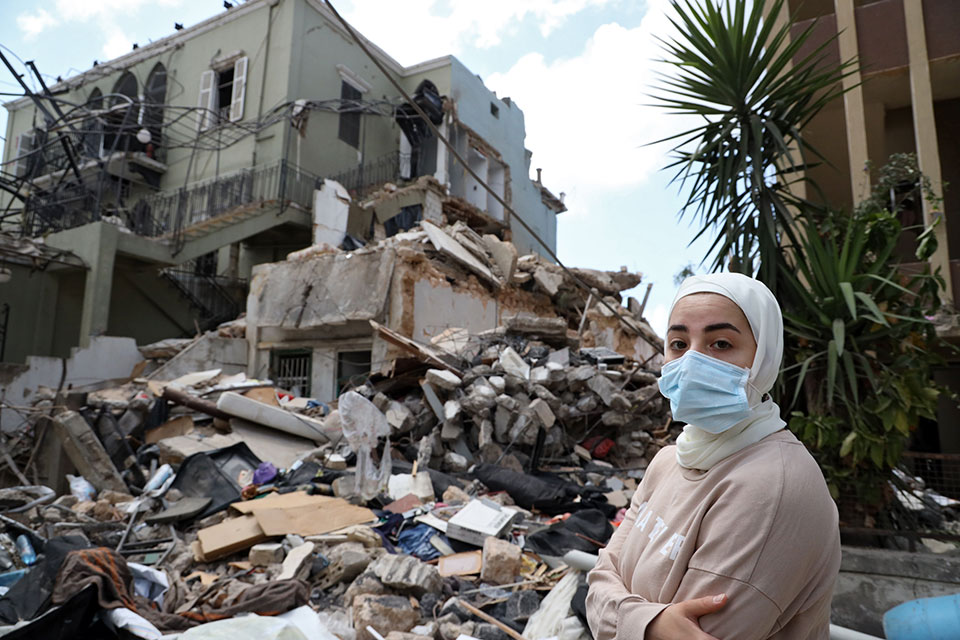 Zalloukh Al Maraanazi, a Syrian refugee now living in Beirut, Lebanon, was resting on the couch when everything started shaking in the afternoon of 4 August. 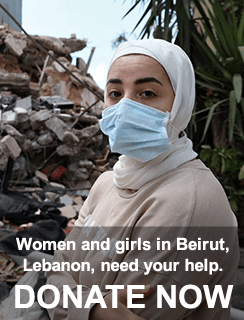 “My son was playing on the balcony when it happened; he literally flew up and landed on the deck. Thankfully, he only has mild bruises,” she said.

The Al Maraanazi family lived in the neighbourhood of Tariq El Jdide, less than 10 Km away from the port of Beirut, where two explosions occurred on 4 August 2020. The explosion has devastated the city, leaving at least 200 dead to date and more than 5,000 injured. Some 300,000 people have lost their homes.

Zalloukh Al Maraanazi had barely overcome the trauma of escaping the violence in Syria. She had just started a soap and candle-making business after taking vocational training provided through a UN Women programme for refugees and local women. Now, she is terrified, and her livelihood opportunities are compromised, again.

Prior to the explosions, Lebanon’s health system was already under strain because of rising cases of COVID-19. A few days after the blasts, on 9 August, 294 new COVID-19 cases were recorded, a new record for Lebanon. 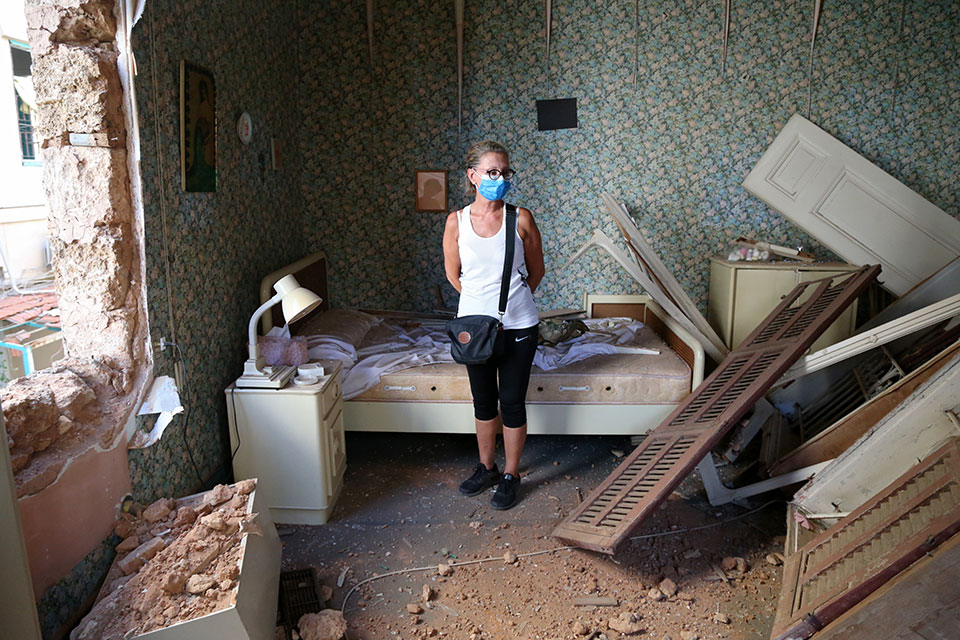 UN Women, along with its partners in Lebanon and the United Nations, has shifted its programmes and expertise to provide immediate relief to women and girls. Through its partners, the majority of whom are women-led national organizations, UN Women has provided immediate protection and psychosocial assistance to those affected and supported the distribution what they need most in the short-term: food and cash. A rapid gender assessment of needs, as part of a broader UN humanitarian action, is underway with Care International and Abaad, a national NGO. 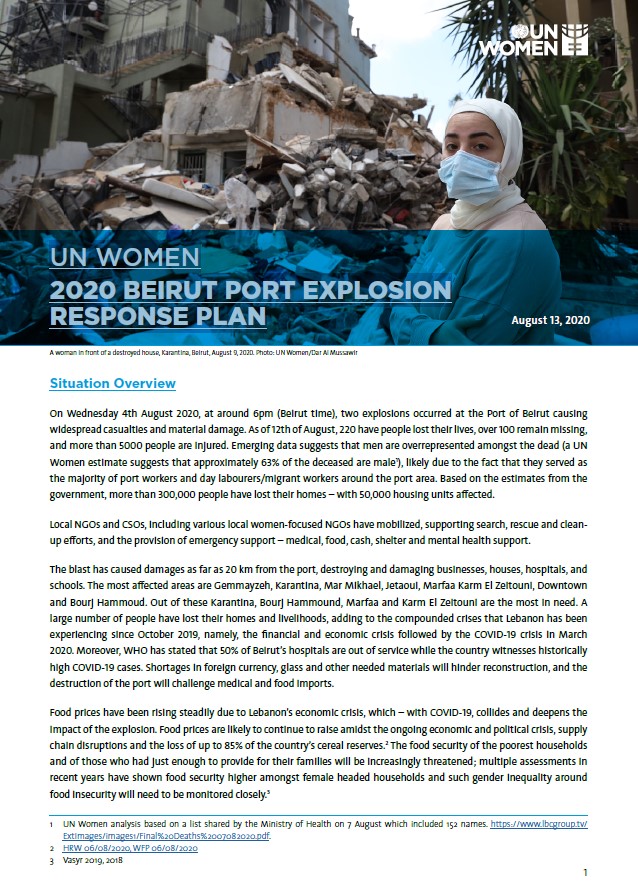 Sexual violence often rises after the crisis. To address this effectively UN Women is working with a host of partners. As part of the Inter-Agency Sexual and Gender-Based Violence Response Plan co-led by the UN, international and national partners, UN Women, together with humanitarian agencies in the country, is preparing to support safety audits in neighbourhoods and deploy mobile teams of gender-based violence experts to distribute essential items for women and girls.

The Beirut blast adds to compounded crises that Lebanon has been experiencing since the financial and economic crisis of 2019, followed by the COVID-19 pandemic that started in March 2020. The COVID-19 crisis led to rising cases of domestic violence and other forms of violence against women across the world.

In Lebanon, one assessment found that up to 54 per cent of respondents had observed an increase of harassment, violence or abuse against other women and girls in their household or their communities. Ensuring that women have access to support and services, as well as information on how to access such support, is crucial. 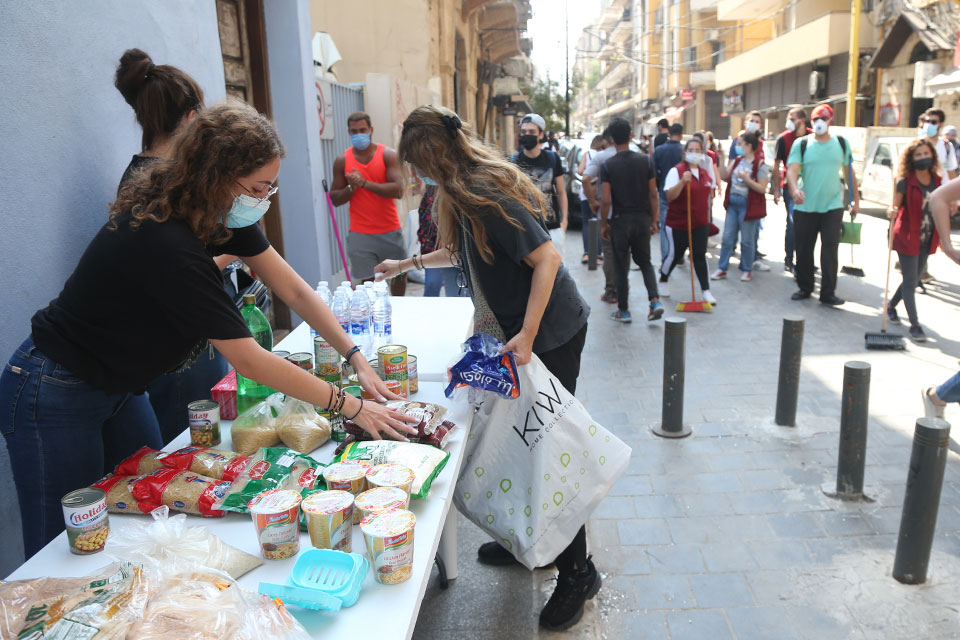 The economic crisis in Lebanon, deepened by COVID-19 and now the Beirut blasts, is estimated to reduce women’s participation in the economy by 14 to 19 per cent.

The implications are particularly bleak for a country with high gender gap (Lebanon ranks 139 out of 153 countries in the World Economic Forum Gender Gap report 2020), and with one of the lowest rates of women’s labour force participation (29 per cent for women[1] as compared with 76 per cent for men[2]). These inequalities are echoed in refugee and migrant communities across the formal and informal labor market in Lebanon.

“We know that on average, women have fewer tools and resources to recover from external shocks. This is due to existing gender inequalities which relegate them as secondary to men,” said Rachel Dore-Weeks, UN Women’s representative in Lebanon. “Women are more likely to not have bank accounts, savings, pensions and access to social protection. In our collective response, we must acknowledge this and ensure that our immediate and longer-term relief and recovery efforts enable women to recover fully and equally as men. It’s also an opportunity to address the gender imbalances that have traditionally made women more vulnerable to poverty and violence.” 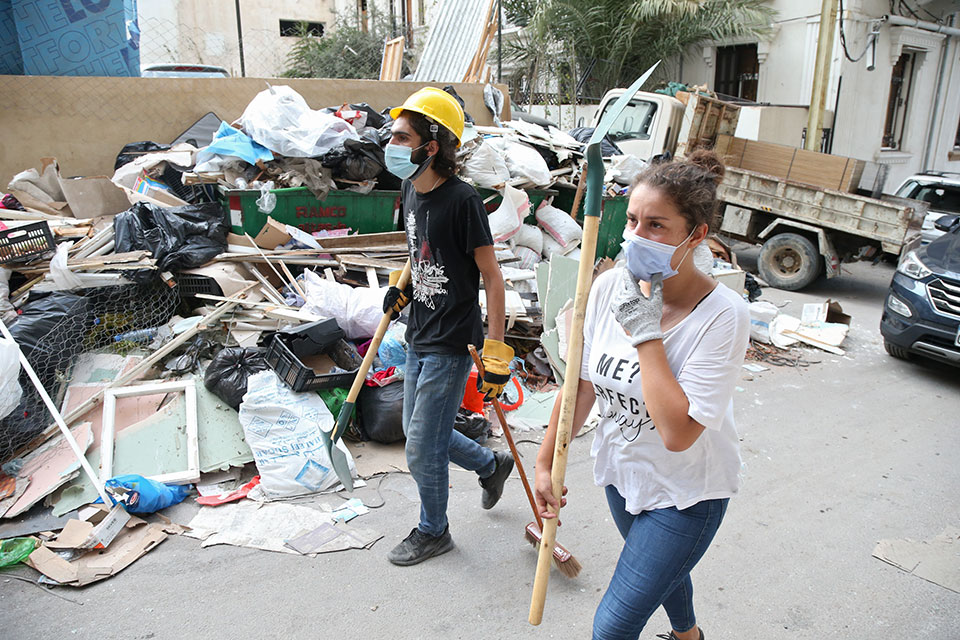 In the aftermath of the crisis, UN Women is scaling up its resilience and recovery programming in Lebanon, while also strengthening its work on women’s leadership and peace and security – key factors for stability in the country and the region.

UN Women has five programmes in Lebanon, funded by the Governments of Croatia, Finland, Japan, the Netherlands, Norway, Switzerland and Sweden, the Ford Foundation, the Rebecca Dykes Foundation, the UN SDG Fund and the UN Human Security Trust Fund. The programmes have pivoted their focus to addressing Lebanon’s economic crisis and COVID-19, and are now adapting to also support longer-term recovery of those impacted by the Beirut blast.

The explosion in Beirut has sent shockwaves across the world. Hundreds of thousands of people have been left homeless, and access to support for women experiencing violence is under threat. Our UN Women team is on the ground, making sure women and girls have access to safe spaces, counselling, sanitary products, and livelihoods support to enable women to keep working. Please give what you can today.