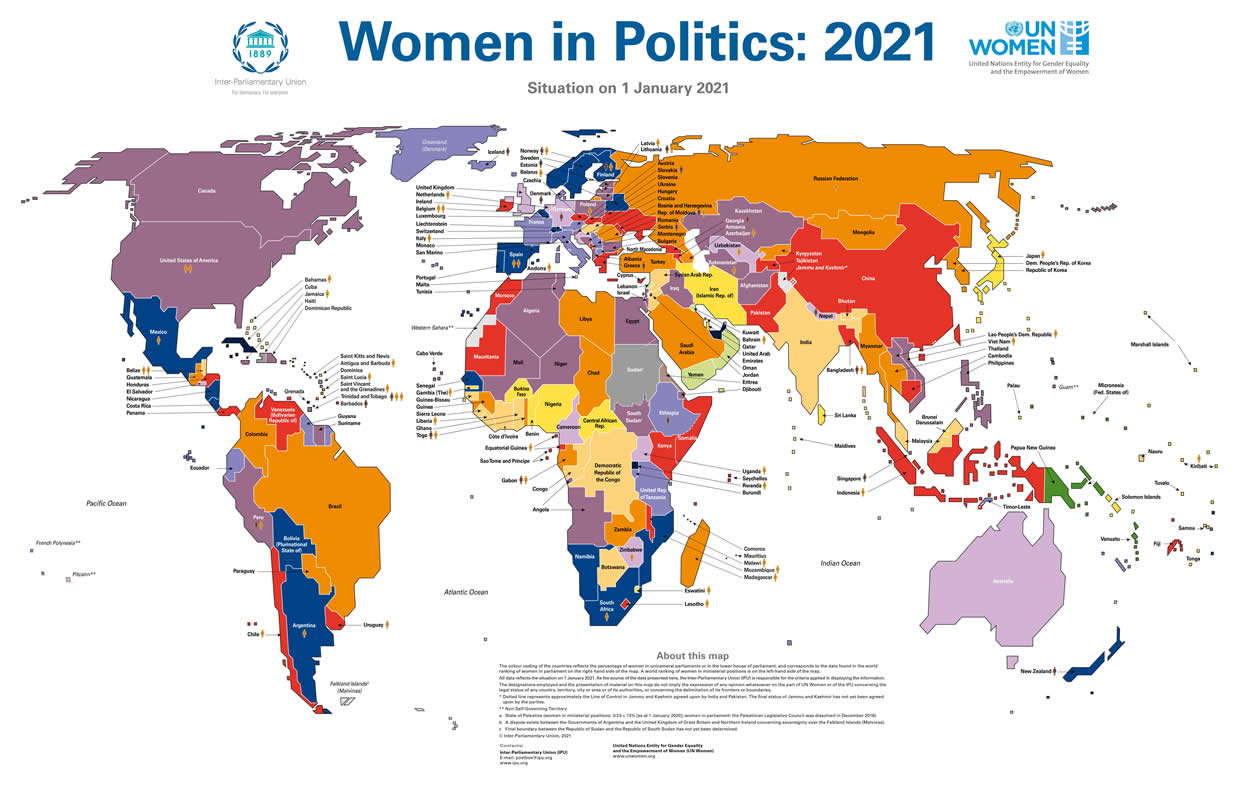 Despite increases in the number of women at the highest levels of political power, widespread gender inequalities persist, according to the 2021 edition of the IPU–UN Women “Women in politics map”.

The IPU-UN Women map presents new data for women in executive, government, and parliamentary positions as of 1 January 2021. The data shows all-time highs for the number of countries with women Heads of State and/or Heads of Government, as well as for the global share of women ministers.

However, after last year’s spike of 21.3 per cent of women holding ministerial portfolios, progression has slowed—with just a small increase to 21.9 per cent in 2021. The data also reveals that the number of countries with no women in government has increased, bucking a downward trend seen the last few years.

There were also sluggish gains in the global growth of women legislators in 2021, as shown in the IPU’s annual report on “Women in parliament”, launched last week. As of 1 January 2021, the global share of women in national parliaments is 25.5 per cent, a slight increase from 24.9 per cent the year before.

UN Women Executive Director Phumzile Mlambo-Ngcuka said: “No country prospers without the engagement of women. We need women’s representation that reflects all women and girls in all their diversity and abilities, and across all cultural, social, economic, and political situations. This year’s map shows us that we still need bold, decisive action across the world to bring women into the heart of the decision-making spaces in large numbers and as full partners. There’s no doubt this can and should be done. It should be done now.”

IPU Secretary General Martin Chungong said: “This year’s growth in the number of women in political decision-making is just not good enough. Especially when you consider that 70 per cent of health, care, and service workers during this pandemic are women. It’s up to all of us, both men and women, to keep pushing for greater representation of women in politics. We have the tools to make it happen. What we need now is the political will.”

The new data was presented ahead of the Commission of the Status of Women, the largest UN gathering on gender equality, which this year has as its priority theme, “Women’s full and effective participation and decision-making in public life, as well as the elimination of violence, for achieving gender equality and the empowerment of all women and girls”. It also comes in the run-up to the Generation Equality Forum that will deliver multi-stakeholder, game-changing Action Coalitions on six topics including leadership  and feminist movements.

Europe is the region with the most countries led by women: five out of nine Heads of State and seven out of 13 Heads of Government. The Nordic countries of Denmark, Finland, Iceland, and Norway are all currently led by women.

Countries with 50 per cent or more women ministers:

More women ministers across all regions

Political will plays a role in advancing gender equality, particularly when it comes to appointing ministers. As a result, some countries saw dramatic increases in their share of women ministers in 2021.

In the Americas, the newly appointed government in the United States is shaping up to be the most gender-balanced in the country’s history: women in charge of ministerial portfolios rose from 17 per cent in 2020 to 46 per cent in 2021. The clear leader, however, both globally and in the region, is Nicaragua, with 58.82 per cent of ministries led by women.

In Asia, Mongolia progressed from 6.7 per cent women ministers in 2020 to 18.8 per cent in 2021, the biggest percentage point increase in the region.

In the Middle East and North Africa region, Lebanon currently has the largest share of women ministers at 31.6 per cent. Tunisia saw the greatest increase, leaping to 29.2 per cent—up from 6.9 per cent in 2020.

In the Pacific region, Kiribati gained one woman minister, and its parliament elected a woman Speaker for the first time. New Zealand maintains the largest share of women ministers at 40 per cent, increasing by 10 per cent compared to the previous year.

Number of countries with no women ministers rises

Despite overall gains across all regions, the number of countries with no women ministers in 2021 increased to 12, compared to nine in 2020.

Environment is the top portfolio held by women

The environment or energy portfolio jumped from third place in 2020 to the top spot in 2021 of ministerial portfolios held by women.

The share of women ministers in charge of foreign affairs portfolios also saw a significant increase compared with last year, rising from 16.8 per cent to 26 per cent.

About the IPU
The IPU is the global organization of national parliaments. It was founded more than 130 years ago as the first multilateral political organization in the world, encouraging cooperation and dialogue between all nations. Today, the IPU comprises 179 national Member Parliaments and 13 regional parliamentary bodies. It promotes democracy and helps parliaments become stronger, younger, gender-balanced, and more diverse. It also defends the human rights of parliamentarians through a dedicated committee made up of MPs from around the world. Twice a year, the IPU convenes more than 1,500 parliamentary delegates and partners in a world assembly, bringing a parliamentary dimension to global governance, including the work of the United Nations and the implementation of the 2030 Agenda for Sustainable Development. For more information about the IPU, contact Thomas Fitzsimons at

About UN Women
UN Women is the UN organization dedicated to gender equality and the empowerment of women. A global champion for women and girls, UN Women was established to accelerate progress on meeting their needs worldwide. For more information about UN Women, contact the media team at