Ahead of the local elections in Turkey to be held in March, UN Women and the Women’s Coalition brought together more than 100 women from across the country to discuss the monitoring of the elections. 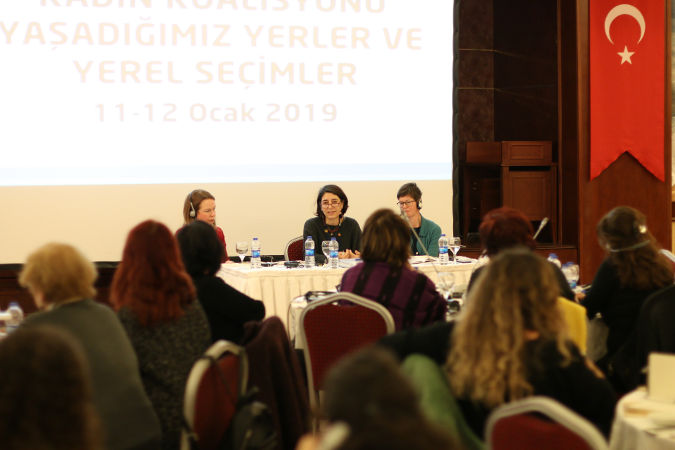 Women’s Coalition, a civil society platform that works to increase women’s participation in politics, brought together more than 90 women from all parts of Turkey. Photo:UN Women/Ebru Ozdayı Demirel

UN Women, together with the Women’s Coalition, brought together more than 100 women from across the country to discuss the monitoring of Turkey’s local elections, which will take place in March 2019, from a gender equality perspective as part of the “Gender Equality in Political Leadership and Political Participation in Turkey”, funded by Swedish International Development Cooperation Agency.

“Women candidates are often exposed to different forms of violence and gender-based discrimination. They generally have fewer supportive social networks and resources to ensure their protection. Gender-responsive elections monitoring can help reveal the violence that women face as candidates, voters and elections officials,” said Sabine Freizer, UN Women Regional Advisor for Governance, Peace and Security for Europe and Central Asia and made a presentation about gender-based violence.

Taking place in Ankara, capital of Turkey, in January, the event created a platform for the participants to plan the content, methodology, coordination and tracking of the monitoring of local elections. The participants discussed the challenges and opportunities regarding women’s political participation. Local actors talked about the various forms of discrimination, including particularly virtual violence and bullying, against women candidates and activists in the monitoring process and discussed the implementation of the Convention on the Elimination of All Forms of Discrimination against Women (CEDAW) and the Istanbul Convention.

“Women’s political participation is an obvious and critical materialization of gender equality. Every election is an opportunity to increase women’s political participation but is also carries risks for women’s representation as large. It is therefore critical to monitor the actual conditions of the elections as a civil society and to bring to light any form of gender-based discrimination for free and fair elections,” said Malin Stawe, Counsellor/Head of Pre-Accession and Humanitarian Assistance at the Embassy of Sweden.

Related News
09/03/2021
This is what leadership looks like: How three women mayors in Moldova are making a difference every day
12/06/2015
Elections herald an increase in women MPs in Turkey, but more progress is needed
10/03/2021
Press release: Women in politics: New data shows growth but also setbacks
14/09/2018
Women and democracy: What does it take to change politics as usual?
03/04/2018
In the words of Lilian Soto: “The presence of diverse women in politics generates different kinds of public policies”
END_OF_DOCUMENT_TOKEN_TO_BE_REPLACED