This is what leadership looks like: Meet Fanta Diamande, a local peace mediator in Côte d'Ivoire

Fanta Diamande, a 32-year-old community leader from northern Côte d'Ivoire, has been involved in the UN Women-supported Network of Women Peace Mediators since its beginning. Today, she is President of its Touba branch and a trainer for early warning monitors, who will flag election-related risks ahead of the parliamentary elections on 6 March. 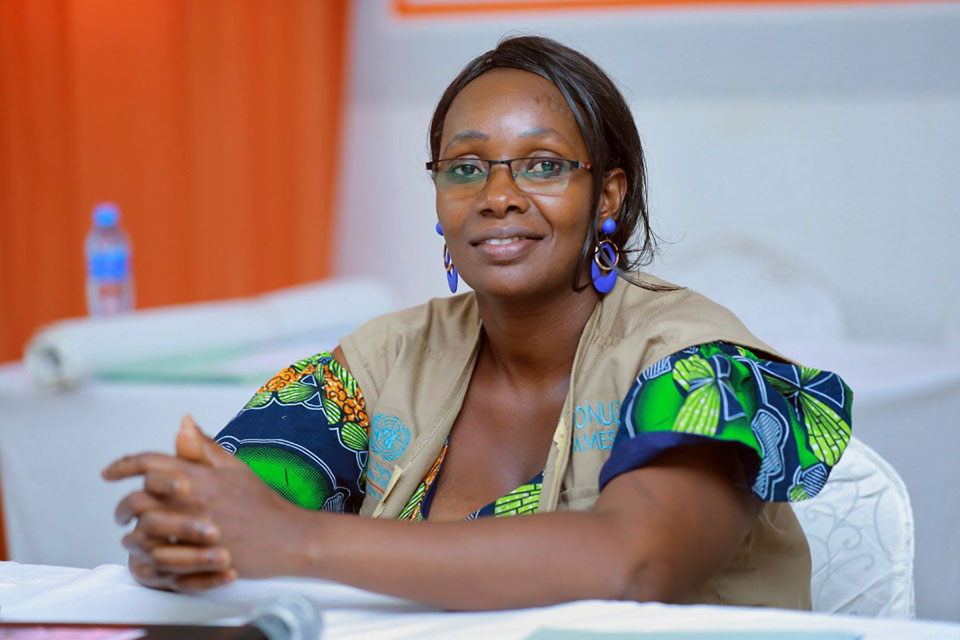 Fanta Diamande is a member of the Network of Women Peace Mediators in Côte d'Ivoire. Photo: UN Women/Irad Gbazale

“I became interested in becoming more active in my community after the political crisis of 2011. … I could see how violence and conflict affected women much more than men,” says Diamande.

As part of the peacebuilding process in Côte d'Ivoire, UN Women and UNICEF, in collaboration with the Ministry of Women, Family and Children (MFFE) initiated a project in 2017 to make women and girls conflict-prevention actors through early warning and information networks.

The programme aimed to reduce political and ethnic tensions at the community level, while training women and youth in mediation, dialogue, social cohesion and gender-based violence prevention.

Mediating to prevent the escalation of violence in families and communities

A network of more of 500 women peace mediators was born, bringing together women of all ages and backgrounds in 10 different regions across the country. Many were already recognized community leaders or members of grass-roots civil society organizations. Others discovered their potential as they participated in the training sessions.

“In general, [women] are marginalized and do not participate in the important meetings where men make the decisions. And it is a great challenge to make women understand that they can and should also participate and that men should [make] space for women.”

The network began as a UN-system initiative that soon gained its own steam. Women began organizing at regional and national levels, gaining respect and recognition in their communities as agents of peace and stability. Traditional authorities, representatives of the MFFE, the Government, the electoral commission, political parties and journalists started turning to them for advice, information and help in cases of local conflict or community issues.

“My job is to listen to everyone and try to be supportive and prevent small conflicts from becoming big ones,” explains Diamande, who is often consulted by authorities.

Gradually, the network also became a key referral point for gender-based violence survivors and their families, in particular, in cases of child rape.

“Parents often do not want to file a complaint out of shame or fear,” shares Diamande. “But we also see that attitudes are beginning to change. Some mothers are encouraged, and we accompany them to make their voices heard, to present their case to the authorities .... We talk to local chiefs and religious authorities. We are at their side and in that sense, the role and responsibility we have as peace mediators is very important.”

“Early marriage is another problem. Sometimes it is not even the family that imposes marriage, but the 13-, 14- or 15-year-old girl who [wants to get married] because the family no longer supports her. In our culture, it is said that the only important diploma for a woman is marriage. So, girls drop out of school and often end up in relationships with men who later abandon them. And they are left alone with small children while they themselves are still children.”

Diamande assists girls caught in such situations and sensitizes communities against early marriage.

In 2020, UN Women, UNDP and UNESCO, in partnership with the Independent Electoral Commission, the National Council for Human Rights, and the West Africa Network for Peacebuilding, established a Platform for Early Warning and Coordination of Responses around election-related risks, including gender-based violence.

“Attitudes are beginning to change. Some mothers are encouraged, and we accompany them to make their voices heard.”

Diamande was among the 50 women peace mediators who participated in a training-of-trainers organized by UN Women in Abidjan in September 2020.

They have gone on to train more than 600 early warning monitors.

“UN Women has accompanied us a lot, helping us to grow and understand our role,” says Diamande.

She finds the training sessions and visibility kits provided by the programme especially helpful. The kits provide t-shirts, vests and also mobile phones that help them communicate with one another.

“I hope that the next generation of women in my country will realize their potential and can be active in their communities.”