Dr. Priscilla Joseph, founding member and Chair of the South Sudan Women’s Peace Network, came to the African Union Gender Pre-Summit from 19-20 January with pressing questions about how to ensure women can be more involved in the peace process in her country, and across the continent. 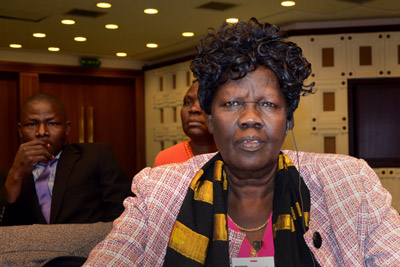 “How could we achieve gender equality if we do not have peace, and how can peace be achieved without the involvement of women?” asks the medical doctor from South Sudan, who has a passion for human rights.

Dr. Joseph and other members of her network were sponsored by UN Women to attend and raise their voices at the Pre-Summit. They also had the opportunity to meet with the South Sudanese Minister for Gender and discuss the involvement of the South Sudan Women’s Peace Network in finding lasting peace solutions for their country.

“Now more than ever, when the African Union has declared 2016 as the ‘Year of Human Rights’, with a focus on the rights of women, we need action-oriented results that put women at the centre of all solutions,” says Dr. Joseph.

She says that although gender equality is very important, it cannot be achieved when there is conflict. Within Eastern and Central Africa alone, she points out that several countries are in conflict, namely: Burundi, Central African Republic, Democratic Republic of Congo, Somalia and South Sudan.

“The Gender Pre-Summit was a great opportunity for members of the network to meet with the Minister who promised to have the network more involved in peace discussions in South Sudan,” she said. “Women need to claim their space to influence peace, not just through numbers, but through strategic vision for maximum impact.”

During the opening of the Pre-summit, the African Union Commission (AUC) Chairperson Nkosazana Dlamini-Zuma said that women suffer most when there is war and therefore need to be part of the peace process. 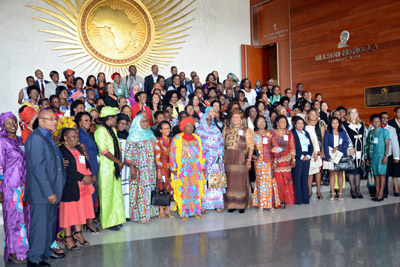 The two-day Gender Pre-summit was organized by the AUC’s Women, Gender and Development Department with high-level support from UN Women and other partners. It was attended by 400 delegates, including 40 ministers and government representatives, 30 experts, as well as civil society representatives.

“The time has come for us to no longer follow, but to be at the centre, especially on issues of peace and security,” said Ruth Ojiambo Ochieng, Executive Director of the feminist advocacy organization Isis-Women's International Cross-Cultural Exchange.

A former Member of Sudan’s Parliament from 2005-2010, Minister in the Office of the President in 2010 and Deputy Minister of Gender for South Sudan from 2011-2013, Dr. Joseph says she felt heard and was encouraged to see great political will to find solutions.

“One thing was very clear at the Pre-summit, it is time to move from solemn declarations to solemn actions and I look forward to seeing the implementation of the United Nations Security Council-adopted resolution 1325 on women and peace and security,” said Dr. Joseph.

On 21 January, Ministers of Gender and Women’s Affairs from across the continent met for a Regional African preparatory meeting ahead of CSW 60, led by UN Women and the UN Economic Commission for Africa.

Dr. Joseph, who also attended the pre-CSW preparatory meeting, said it underlined the importance of “a coordinated approach to influencing policy processes at different levels… to fast-track the implementation of gender equality and women’s empowerment commitments.”

Some 250 participants in the pre-CSW meeting agreed that achieving gender equality and women’s empowerment in the post-2015 development context―in line with Africa’s Agenda 2063―will require transforming economies and societies if Africa is to address the pervasive gender inequalities across economic, political, social and environmental spheres.

Related News
25/01/2016
Women mediators promote peace in Burundi
08/08/2019
From where I stand: “Young women's inclusion in peacebuilding will create sustainable peace”
07/05/2019
A place of peace, reconciliation and growth
24/07/2017
Joint UN-AU delegation to focus on women’s participation and leadership in electoral and peace processes during visit to DRC
19/07/2017
Joint UN–AU high-level delegation to Nigeria and the DRC to spotlight women, peace and security agenda
END_OF_DOCUMENT_TOKEN_TO_BE_REPLACED