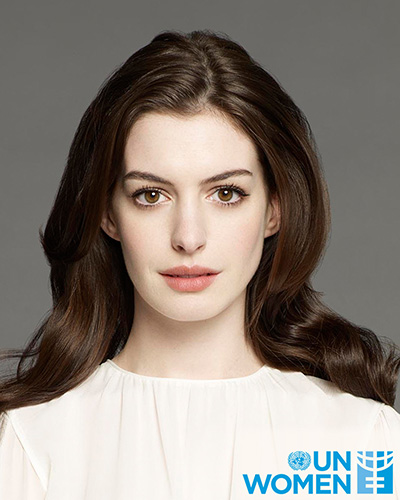 Award-winning American actor and long-standing supporter of girls’ and women’s rights, Anne Hathaway, was appointed as UN Women Goodwill Ambassador in June 2016. Ms. Hathaway will dedicate her efforts to raise awareness on the issue of unequal burden of care work in the home and advocate for affordable childcare services and shared parental leave.

When it comes to equality, Ms. Hathaway is a committed voice for change. She has previously served as an advocate for Nike Foundation to raise awareness against child marriage. In 2013 she provided the narration on ‘Girl Rising,’ a CNN documentary film, which focused on the power of female education as it followed seven girls around the world who sought to overcome obstacles and follow their dreams.

“I feel honoured and inspired by this opportunity to aid in advancing gender equality,” said Ms. Hathaway. “Significant progress has already been made but it is time that we collectively intensify our efforts and ensure that true equality is finally realized.”

Passionate about charitable causes, Ms. Hathaway has worked with The Girl Effect, World of Children, St. Jude Children’s Research Hospital, and is a board member of The Lollipop Theatre Network.